Westminster’s two newspapers, the American Sentinel and Democratic Advocate, were filled with details about the observance of Decoration Day on May 30, 1887.  A heartfelt speech was reproduced verbatim and the grave-decorating ceremonies in various towns were meticulously reported.  Twenty-two years after the Civil War was over, it sounded as if local wounds were well on their way to being healed.

The Sentinel of June 4th reported, “Union Decoration Day is a national holiday.  In every part of the United States where soldiers who wore the blue lie buried, flowers were strewn and orations delivered.  Time has almost obliterated the bitterness of the war, and in all generous hearts there is a desire to increase the sacredness of Decoration Day by placing flowers upon the graves of all the gallant men who fell in that awful strife, no matter whether they wore the blue or the gray…In Maryland, Decoration Day, Union or Confederate, is not recognized as a legal holiday, but so many persons participate in the ceremonies that business is to a large extent laid aside.”

Yes, there were still separate celebrations of Decoration Day in Maryland as late as 1887.  The Sentinel noted, “The Confederate Memorial Day will be celebrated on June 6, the anniversary of the death of Ashby, by the Society of the Army and Navy of the Confederate States in Maryland.”

In Carroll County, the ceremonies were generally planned by the local Grand Army of the Republic (G.A.R.) posts – Burns Post in Westminster, Pickett Post in Winfield, Miller Post in Taneytown and Thaddeus Stevens Post in New Windsor.  Then, as now, there was usually a parade with participation by one or more local bands; veterans marched and children carried flowers to decorate the graves. Prayers, poetry readings and speeches were also integral to the ceremonies.  In that era of racial segregation, it is noteworthy that Westminster’s 1887 parade included veterans from both the all-white Burns Post and the all-black Stevens Post.  Many local African Americans joined the United States Colored Troops beginning in 1863.

An address given by the Reverend Dr. James T. Ward, president of the Westminster Theological Seminary, included references to the purpose of Decoration Day.  “The representatives of the army (and it may be some of the navy) of our country here to-day, honor the memory of these dead as those who were their comrades, in marchings, in toils and sufferings, and in battles.  To others who hear me, some of these dead were endeared by ties of consanguinity; to others, by ties of personal friendship; but to all of us the memory of all of them, as patriots, is dear; and we have reason to honor their names and to imitate their devotion to their country… I have no sympathy with the opinion that these Memorial Days are calculated to revive old animosities; on the contrary, properly observed, they will more and more promote the spirit of peace as well as patriotism…They serve to keep us in remembrance of the toils and sacrifices by which our liberties have been secured, and to foster a love of country which inspires devotion to its continued welfare…”

Ward continued, “The custom of decorating graves with flowers is very ancient…Especially in our country since the war, which terminated with the happy result of the Union preserved and freedom enlarged, the people in all parts of the land have met on stated days, men, women and children participating in the ceremony to decorate the graves of the soldiers of the war with flowers, not only as expressive of the desire to honor the memory of deeds of bravery and sacrifice, but also as means of teaching valuable lessons to the living.” 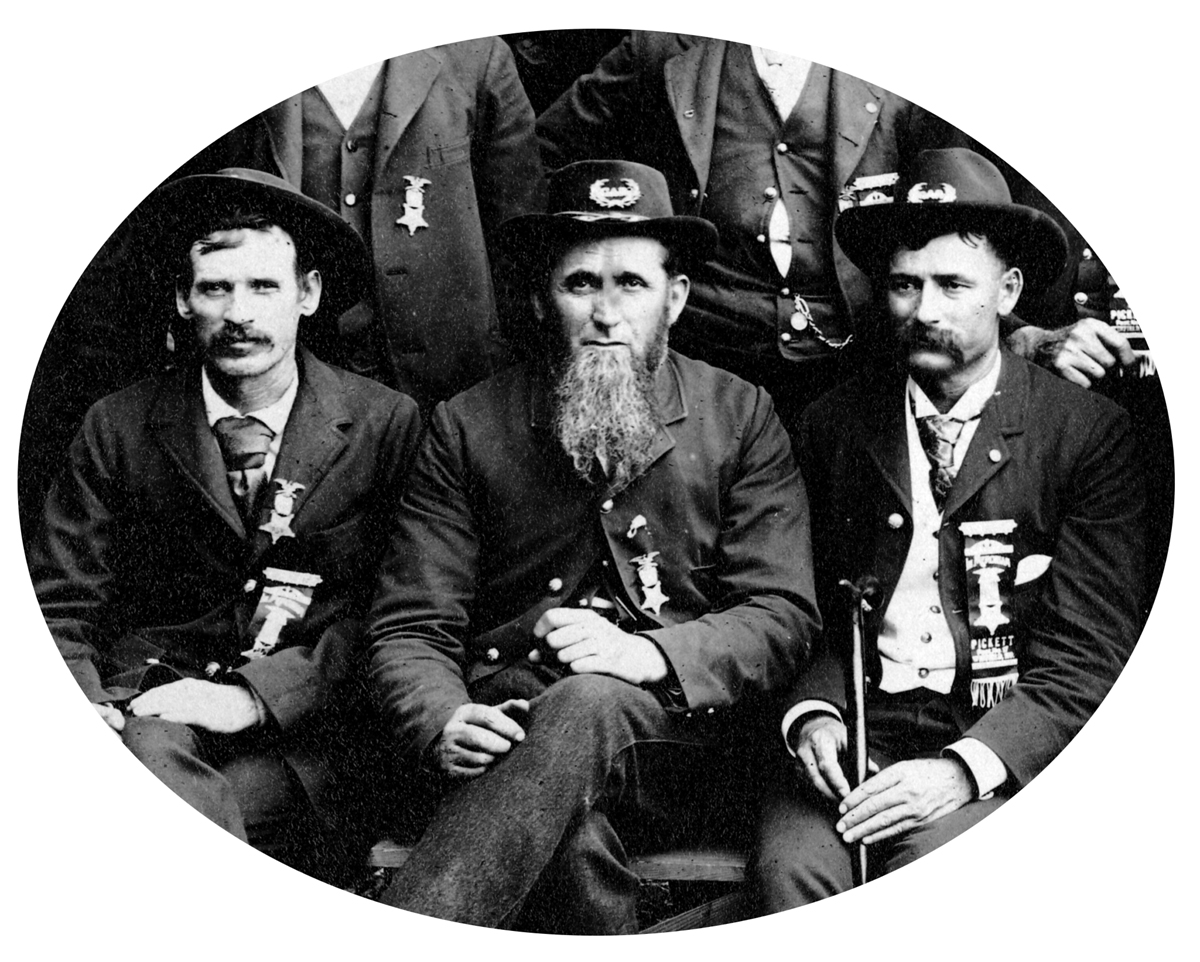 Photo caption:  These Civil War veterans are part of a group photo of the Pickett G.A.R. Post in Winfield, Carroll County, taken about 1890.