A glimpse at historical records reveals that James Sykes (1791-1881), for whom Sykesville is named, had the energy and business acumen typical of so many early Carroll County settlers.  Industry, not farming, was his area of expertise and he made his greatest impact between 1825, when he first bought land in the vicinity of modern-day Sykesville, and 1857, when a financial crisis wreaked havoc on his investments.

English manufacturer John Sykes arrived in America on a business trip in the late eighteenth century and, liking the opportunities here, brought his family to join him in Baltimore where he became a prosperous merchant.  Son James, who served with the American forces in the War of 1812, displayed the same gift for business success as his father.

In 1825 James purchased roughly 1,000 acres in what would become Carroll and Howard Counties, including a tract along both banks of the south branch of the Patapsco River where a dilapidated grist and saw mill already stood.  After replacing the mill and operating it successfully for a number of years, he enlarged it and converted it into the Howard Cotton Factory in 1845, then brought in several hundred workers for whom he constructed housing.

When the Baltimore and Ohio Railroad began operation in the late 1820s, Sykes was in a perfect position to take advantage of the opportunities it offered.  He constructed a stone, five-story hotel beside the tracks.  As the first railroad cars were pulled by horses, Sykes’s hotel became a stop where fresh horses were supplied before the journey continued.  Even after steam locomotives replaced horsepower, the hotel remained a popular destination for summer visitors from the city.

Sykes shipped his factory goods to Baltimore by train; local farmers and millers loaded their produce, livestock and flour. Wealthy George Patterson, who farmed the huge estate named “Springfield,” certainly took advantage of the railroad as did the Tyson family, owners of nearby mines and an iron furnace.

At first the town was informally known as “Sykes,” but by the 1840s people referred to it as Sykesville.  During those early years, most of the industry – B&O tracks and freight office, mills, mill housing, hotel, iron furnace, etc. – was clustered on the narrow flood plain along the banks of the Patapsco, chiefly on the wide and level south bank.  Eventually James and Mary (Brown) Sykes built a large home nearby.

According to the 1850 census, Sykes’s real estate holdings were valued at $82,500.  This era was probably the pinnacle of his business career.  In addition to extensive land holdings in southeastern Carroll County, he owned mills in Frederick, Baltimore and Howard Counties.  When Howard County was carved out of Anne Arundel County, he served as a representative in the state legislature.

In 1857, a nationwide recession affected the fortunes of many, including Sykes, and forced him to close the cotton factory.  Though it later operated sporadically under other owners, it never regained its previous success.

One of the most significant events in Sykesville’s early history occurred in July 1868 when a violent storm caused flooding that washed away many of the buildings on both banks of the river – even changing its course; gone were the tracks, Sykes’s hotel, parts of the mill and iron furnace along with other businesses and homes. The B&O quickly reopened, and later development of the town occurred principally on the northern (Carroll County) side of the Patapsco.

Mary Sykes, who died in 1863 and James, who died in 1881, were buried at Baltimore’s Green Mount Cemetery.  Although the couple left no descendants, James Sykes’s name and contributions are an important part of Carroll County history. 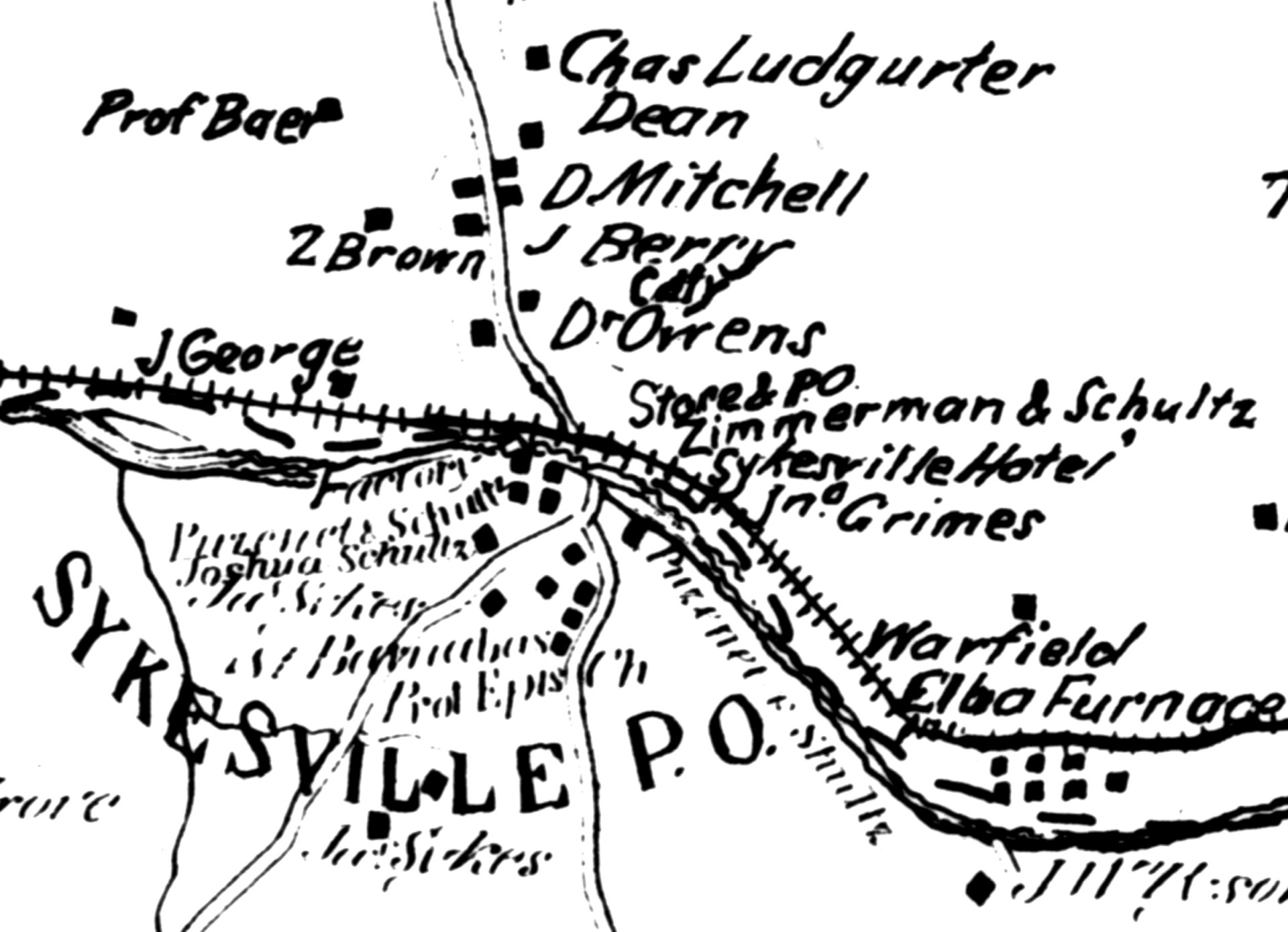 Photo caption: This enlargement of an 1862 map shows the B&O Railroad, hotel, mill and other buildings clustered on both banks of the Patapsco River in Sykesville.