Life Not So Speedy in 19th Century

It’s delightful when old newspapers reveal the way things used to be in Carroll County, particularly when those “long agos” were as early as the 1840s. The “Reminiscences” James L. Switzer wrote for the Union Bridge Pilot of 1910 stretch back that far. Switzer, born in 1837, still had vivid memories of growing up in Union Bridge when he penned his series of columns.

Saturday nights were the big times at the burg [Buttersburg]. Mr. Shaw was postmaster.  There was one mail a week; carried on horseback from Baltimore. It arrived on Saturday, so that the distribution was made in the evening when the farmers came in from the country. Letters had to be paid for when received.  The postage on papers had to be paid by the quarter. It cost 25 cents to get a letter from Iowa; and less or more, according to distances, from other states. Publishers did not then prepay postage on their periodicals, but, – instead, the postage was collected from the subscriber, according to distance and weight of paper. Stamps had not then come into use [not until 1847] and the postmaster had to make collections and keep correct accounts between the government and the patrons of his office. This Mr. Shaw did for years, besides supplying the community with dry goods, groceries, confectionaries and notions.

He did not handle canned goods because no goods were put in cans. He did not handle granulated sugar nor sorghum molasses nor roasted coffee. He did not handle California fruits or Colorado potatoes. Cigars and tobacco he handled, but no cigarettes and no football or baseball goods. Millinery goods, ostrich feathers and hair switches were not in store.

However, Mr. Shaw’s stock of goods was considered tolerably complete for that day. All his goods came direct from Baltimore, over the turnpike, 40 miles away, and yet his facilities for getting goods from the city were not so bad when we consider that the “pike” was lined with farmers and huckster wagons going and coming all the time, every day in the week and sometimes on Sunday too….

Union Bridge in that early day improved slowly. It had no turnpike or R. R. facilities – no telegraph – no telephone – no phonograph. The streets were not paved, save with mud, and hotel facilities were meager.

John Chew builded and opened up a shoe shop near by Mr. Fuss’ place at the south end [of town]. He was succeeded by Washington Wilson in the same business, who remained there a good long while and shod the citizens for miles around. Ready-made shoes from Massachusetts were not in vogue then. You went to the shop, got your foot measured and got your shoes or boots made to order. Wilson bought his leather at Uniontown or Bruceville, a tannery being at each place. There was no Armour or Swift – or Morris or Cudahy to drive off your cattle and put your meat in cold storage and send your hides to Providence and Lowell. No sir, you butchered and cured your own meat. You sold your hides to the home tanner, who purchased the oak bark from you to tan the hides; or you could trade your hides at the tannery for leather, deliver it to Mr. Wilson or Mr. Bowers, get your foot measured, and in 2 weeks go and get a pair of shoes or boots that would last a year. Then Mr. Wilson would buy flour at the Mill, goods at Shaw’s store, meat from the farmers. The business and money was kept at home and no R.R. Co. or big packing concern got a rake off.

James Switzer certainly would be amazed at the cell phones, online catalogs and myriad speedy answers to every need which we enjoy today! 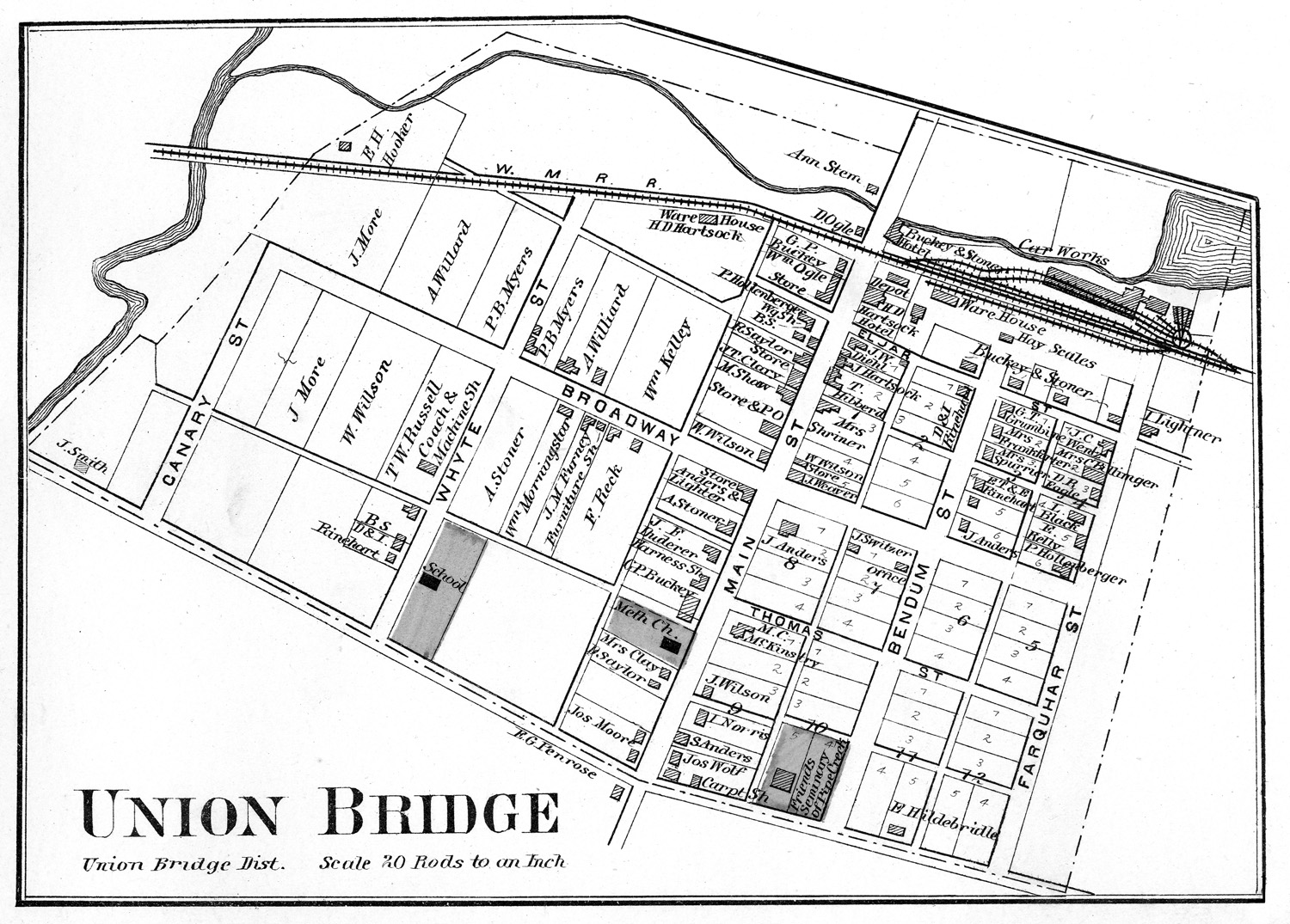 Photo caption: Union Bridge, first called Pipe Creek Settlement and later known as Buttersburg, received its current name in 1820 because a bridge over Little Pipe Creek joined the two sections of the town.