6 April 2008 – Hoover Has Connections to Carroll

6 April 2008 – Hoover Has Connections to Carroll

Hoover Has Connections to Carroll

Republican presidential candidate Herbert Hoover and his wife slipped quietly into Carroll County during the autumn of 1928 to explore the area where Hoover’s Quaker ancestors had settled almost two centuries earlier.  According to an account in The Times, the Hoovers arrived by car and enjoyed visiting the 1772 Pipe Creek Quaker Meeting House and burial grounds on the outskirts of Union Bridge.  “Mr. Hoover was interested in reading inscriptions on the monuments and trying to find traces of his forbears who were buried there, he believed,” said the newspaper.

Actually, Hoover knew his ancestors weren’t buried at Pipe Creek, but that probably didn’t spoil his visit.  He also stopped at an old house near Clear Ridge Road built on land his ancestors once owned.  Although it was not his ancestral home, he still must have been touched to stand on soil his ancestors had cleared and farmed.

In that era before presidential candidates were surrounded by Secret Service agents, it is charming to read: “Herbert Hancock, a resident of near Union Bridge…and his son were walking near the cemetery at the time of Mr. Hoover’s visit.  The boy recognized Mr. Hoover from his pictures and the Hancocks introduced themselves and were invited by Mr. Hoover to partake of the picnic lunch with which the candidate’s party was provided.”

About 1746, a Quaker named Andrew Hoover acquired fifty acres called “Mirey Springs” near the Pipe Creek Settlement (present-day Union Bridge) which had been established in 1735 by William and Ann Farquhar, Quakers from southeastern Pennsylvania.  Andrew and his family lived among a growing number of Quaker families until he sold his land to Stephen Bowers in 1762 and moved on to what is now West Virginia where members of the family are buried.

The settlement was on Maryland’s frontier in the 1730s and 1740s.  Indians were slowly withdrawing from the area, but settlers were still vulnerable.  George Washington and General Braddock had not made their disastrous expedition to chase the French and Indians from western Pennsylvania.  Fort Frederick had not been built to protect families living beyond Hagerstown, and Prince George’s County was a huge area stretching along the Potomac River over much of central and western Maryland. Frederick County wasn’t carved out of it until 1748. Fortunately, the Indians had great respect for the integrity of William Farquhar who managed to keep his small settlement safe until the Indians disappeared.

During that early period, the Pipe Creek Quakers worshipped in members’ homes, but in 1764, two years after Andrew Hoover pulled up stakes, Farquhar built a log church in an area sometimes called “Muttontown” along Bark Hill Road between Uniontown and Union Bridge and the congregation established a cemetery there as well.  Eight years later, Farquhar donated two acres of land just outside Union Bridge for construction of the quaint brick Pipe Creek Meeting House we know today.  It was adjacent to large tracts of land he owned in the Union Bridge area.

What became of the old log church is unclear.  There are reports it may have been located where Bowen’s Chapel now stands.  That chapel has served as a school and church for the small black community along Bark Hill Road.  After abandoning the log church, the Quakers gave its burying ground to the community, which used it for many years.

Herbert Hoover visited Pipe Creek Friends Meeting House not long before a disastrous fire destroyed the interior in 1934, but the congregation repaired it quickly.  As Hoover watched this country sink deeper and deeper into the Depression, he might have wished he could trade his economic troubles for those of his Indian-fearing ancestor, Andrew! 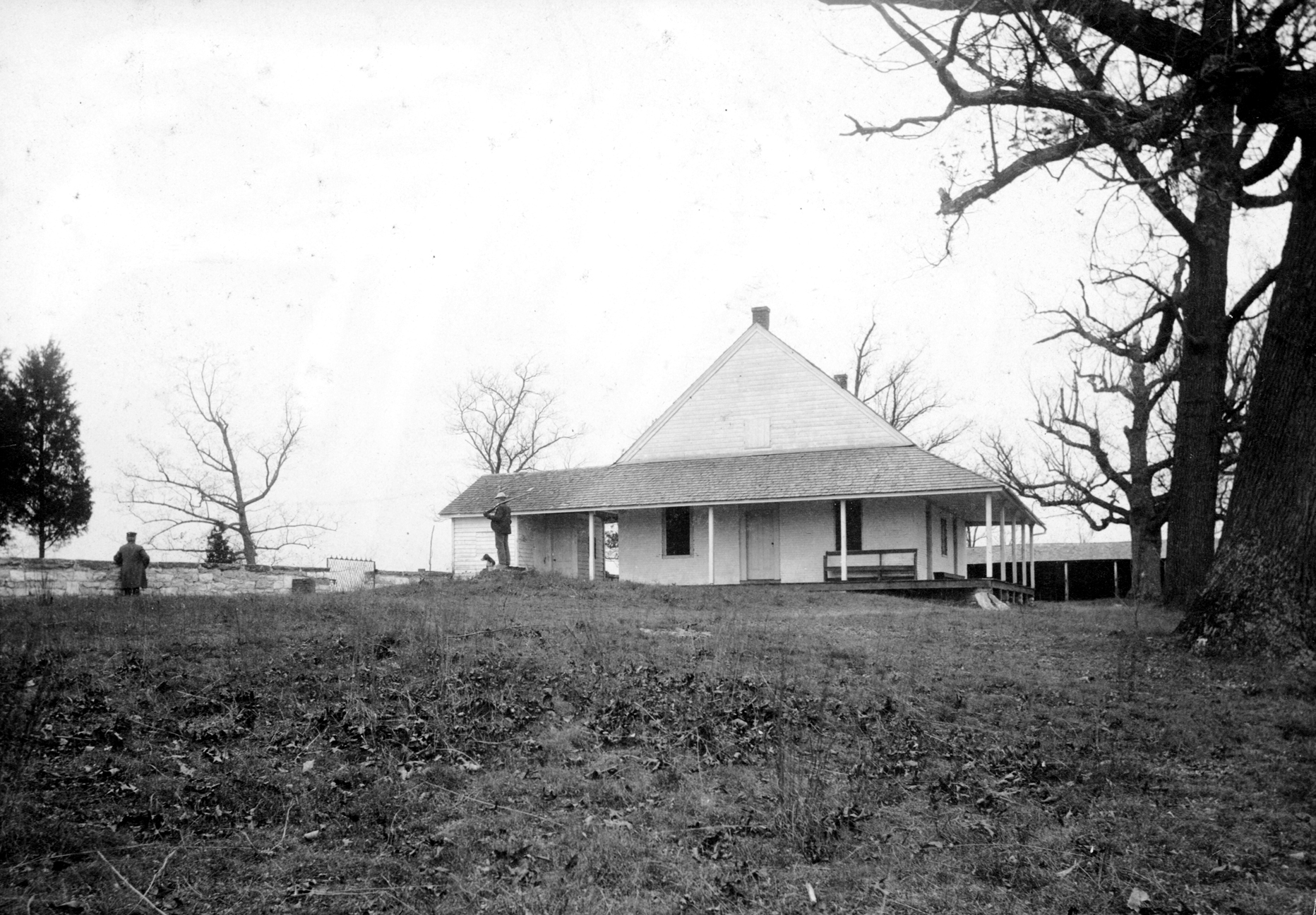 Photo caption: This 1896 photograph shows Pipe Creek Quaker Meeting House in Union Bridge as it appeared before a disastrous 1934 fire gutted the interior.  Changes were made to the pitch of the roof as well as other features during reconstruction.