Locally brewed beer is easy to find in Westminster these days.  One need only go downtown to Johansson’s Dining House.  The only dilemma is deciding which style to order.  Situated in such a historic building, do its patrons ever wonder about the history of brewing in Westminster?  At least one of us has.

It just so happens that Westminster became the home of a brewery in 1821 with the arrival of Michael Barnitz.  A native of Hanover, Pennsylvania, Barnitz came from a long line of brewers who established such businesses in York (1744) as well as the first ever in Baltimore (1748).  The family also purchased an extant brewery in Hanover in 1776.  Michael learned the trade for several years there prior to relocating to Westminster.

Barnitz was 23 when he secured a home on East Main Street just east of Court Street.  He built a large brewery (by 1820s standards) behind the house.  Being a cool weather occupation in those days, brewing likely commenced in the fall of 1821.  Enough beer would have been produced in the cooler months to sate local thirsts year round. Therefore, storage of full barrels during summer necessitated a cellar or ice house to prevent spoilage.

After 17 years in business, Barnitz began looking for a successor.  His newspaper advertisement on August 9, 1838, offered for sale his brewery, “built of brick and comprised of between 200 and 300 kegs.  There is none other nearer than Baltimore and Gettysburg.  He finds ready sale for as much beer as he can make and desires to quit due to ill health. Will teach buyer the art.”

Solomon Zepp, a young man of 28, answered the ad and eventually purchased the brewery in January 1839.  Zepp continued the brewing but evidently required continued advisement of Barnitz.  Under this arrangement, the business remained profitable and production increased until 1842.  While retaining his house in Westminster, Barnitz seems to have moved to Baltimore at this time.  Shortly thereafter, Zepp advertised the brewery for sale, citing his wish to relocate.

As no buyer emerged, Zepp petitioned for insolvency in 1845.  John K. Longwell eventually bought the brewery property in 1848 but evidently did not continue the business of brewing.  Westminster would be devoid of a brewery for over 20 years.

In 1869, the “dry” spell ended with the arrival of William Liedlich.  A cooper of German birth, he lived in York for a number of years and was a Civil War veteran.  His business in York mainly consisted of making flour barrels, but he must have had some mutual patronage with breweries to learn the trade.  He also had at least one other brewer in his employ.

Liedlich’s brewery was located just west and adjacent to the Montour House on West Main Street.  Unfortunately, this brewery was short lived as Liedlich died of sun stroke in August of 1871.  The business ceased as the brewing equipment was sold to Ambrose Schmidt, a brewer from Hanover.  Westminster would have to wait 127 years for a pint at Johansson’s.

Tim Bowers is a brewing history enthusiast and collector of brewery advertising items. 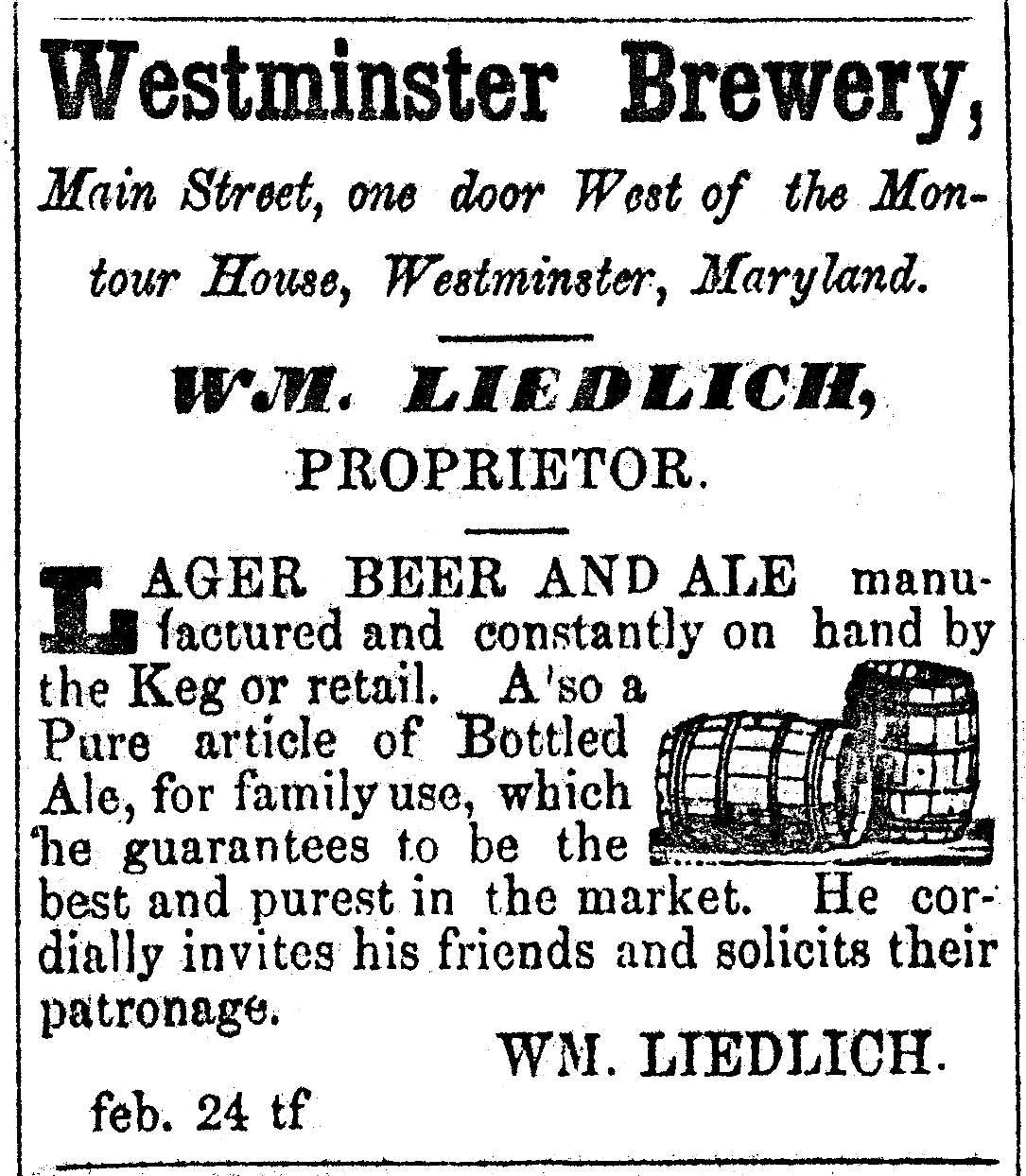 Photo caption: This advertisement for Liedlich’s Westminster Brewery appeared in the American Sentinel of March 10, 1870.  Montour House still stands near the corner of Bond and West Main Streets in Westminster.  In the nineteenth century, it served as one of Westminster’s many hotels.