June, the traditional month for weddings, is just around the corner.  We have been exposed to a wide variety of twentieth and twenty-first century weddings of the traditional type as well as “destination” weddings, and we’ve seen write-ups of unusual ones such as when SCUBA-diving enthusiasts are married beneath the sea.

The Historical Society owns the scrapbook of George Princeton Buckey Englar of New Windsor which contains a number of fascinating clippings pertaining to weddings and their aftermaths during an earlier period.  On February 27, 1890, George married Mary Susan Nusbaum.  The description of that event follows:

“The spacious and hospitable residence of M. Isaiah Nusbaum near Sam’s Creek was ablaze with beauty and fashion on Thursday of last week at high noon to witness what is seldom seen except on such occasions.  The happy parties at “Mahogany Grove” were George P. B. Englar and Miss Mary Nusbaum.  Promptly at 12:30 p.m. amid the strains of a wedding march from “Tannhauser,” skillfully executed on the organ by Miss Maggie Stem and under the direction of the accomplished ushers, Marshall Nusbaum, brother of the bride, and Joseph Englar, brother of the groom, the bridal party passed into the dimly lighted parlor where they were met by Rev. J. H. Marsh, the esteemed pastor of New Windsor circuit who performed the ceremony amid almost breathless silence.

“The bride, who is very popular, wore to much advantage a rich garnet royal silk trimmed with garnet and old rose satin.  The groom looked radiant and happy in a handsome suit of black with white tie.  The happy couple left on the 4 o’clock train for Philadelphia, New York and an extended trip north.”

When newly-weds returned from their honeymoons, it was sometimes the occasion for a “callithumpian” (also spelled “calithumpian”), especially when couples had many local friends.  Two examples of this unusual celebration make entertaining reading.

“On Saturday evening Mr. Walter Engel and bride, nee Miss Irene M. Albaugh, returned from their trip [in 1889], having visited friends and relatives among the Alleghenies and oil fields of the Keystone State.  About 7 o’clock on the evening of their return one hundred strong assembled and made noise enough to last a lifetime.  They marched around the house three abreast to the strains of music from cornets, milk coolers, violins, sheet iron stove drums, kettle drums, sleigh bells, mouth organs, etc. for an hour.  When the bride and groom appeared, three rousing cheers were given.  The bride was becomingly attired in Satin Rhadama with Persian trimmings and wore a coronet of white flowers.”

“When Mr. and Mrs. George Stocksdale returned from their honeymoon [in 1885], probably in all the history of New Windsor there has never been such pandemonium.  The sound of the calithumpian was heard miles away, its duration appeared endless, although it only continued about three hours.  Vehicles were stacked to obstruct the highway.  There was the continuous shrieking of the steam whistle of a traction engine to swell the melody of the horns, trombones, horse fiddles, gongs, human yells and the like.” 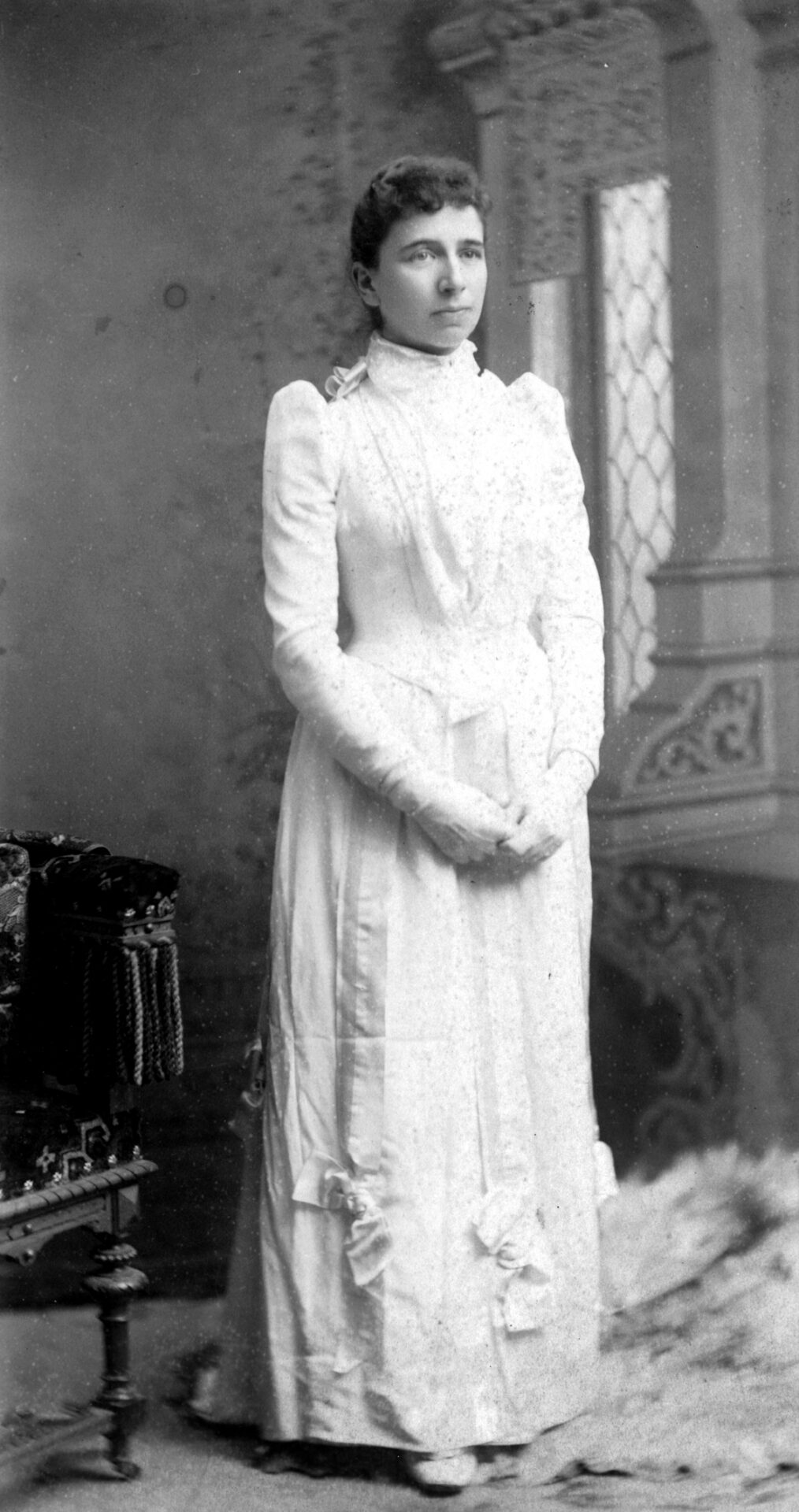 Photo caption: Annabel Smith posed in her wedding dress before her marriage to Hugh Latimer Elderdice, Sr., in June 1891.