“Go West, young man, and grow up with the country.”  This famous piece of advice attributed to Horace Greeley was followed by many born in Carroll County during the nineteenth century.  In fact, for some families, our area was just a temporary place to settle down for a generation or two before moving on.  Whether in search of more land, free land, adventure, gold…whatever the dream…individuals and families were lured westward.

In 1838, Joseph Roop and his family, including sixteen-year-old Isaac, left for Ohio.  Within two years, Isaac was operating his own grist and saw mill and had found himself a well-educated wife.  Nancy taught her husband how to read and write and the couple produced three children between 1841 and 1845, but in June 1850 Nancy Roop died of typhoid fever.  Isaac put his business affairs in order, left his children with their grandparents and headed for California by sea, crossing Nicaragua and landing in San Francisco by October.  Although he began mining gold, settling a remote area of northeastern California near the Nevada border was his real passion and he became an important political figure in that region before his 1869 death.  His daughter’s name is preserved in the town of Susanville, Lassen County, on the eastern slope of the Cascade Range.

Isaiah Lightner’s story is quite different.  After serving in the Civil War, he returned to his hometown of Union Bridge, settled down and became a respected member of the Pipe Creek Society of Friends (Quakers).  But something in the West must have called him.  Between 1878 and 1879 he headed for northeastern Nebraska with his wife and two children.  Whether the family traveled by wagon or train is unknown.  The birth of a daughter shortly after their arrival suggests Fannie Lightner was pregnant during the journey.

After serving as the Indian Agent on the Santee Reservation for six or seven years, Isaiah moved his family south to a Quaker community near the Platte River in central Nebraska where they farmed for the rest of their lives.  Several Lightner children married into immigrant families directly from Europe.

“Carroll Countians to Try their Fortunes in North Dakota.”  That was the title of an article in the March 24, 1900, issue of Westminster’s Democratic Advocate.  “On Monday next about thirty-eight to forty persons will leave Westminster for North Dakota, to make new homes for themselves.  In the number are several whole families.  Several will leave their families here for the present, until they get homes provided…  A frieght (sic) car to carry whatever the emigrants desired to take with them, was dispatched in advance of the passenger car to Chicago, where it will be attached to the train carrying the passenger car.  In the car, which left yesterday, were horses, pigs, cows, chickens, household goods, &c…”  The fare was $28.75.

Searching the 1910 census, I found just two of the original group still living around Minot where the Great Northern Railroad dropped them.  Arthur Englar arrived with his wife and six children; William Myers came alone but now had a family of eight. 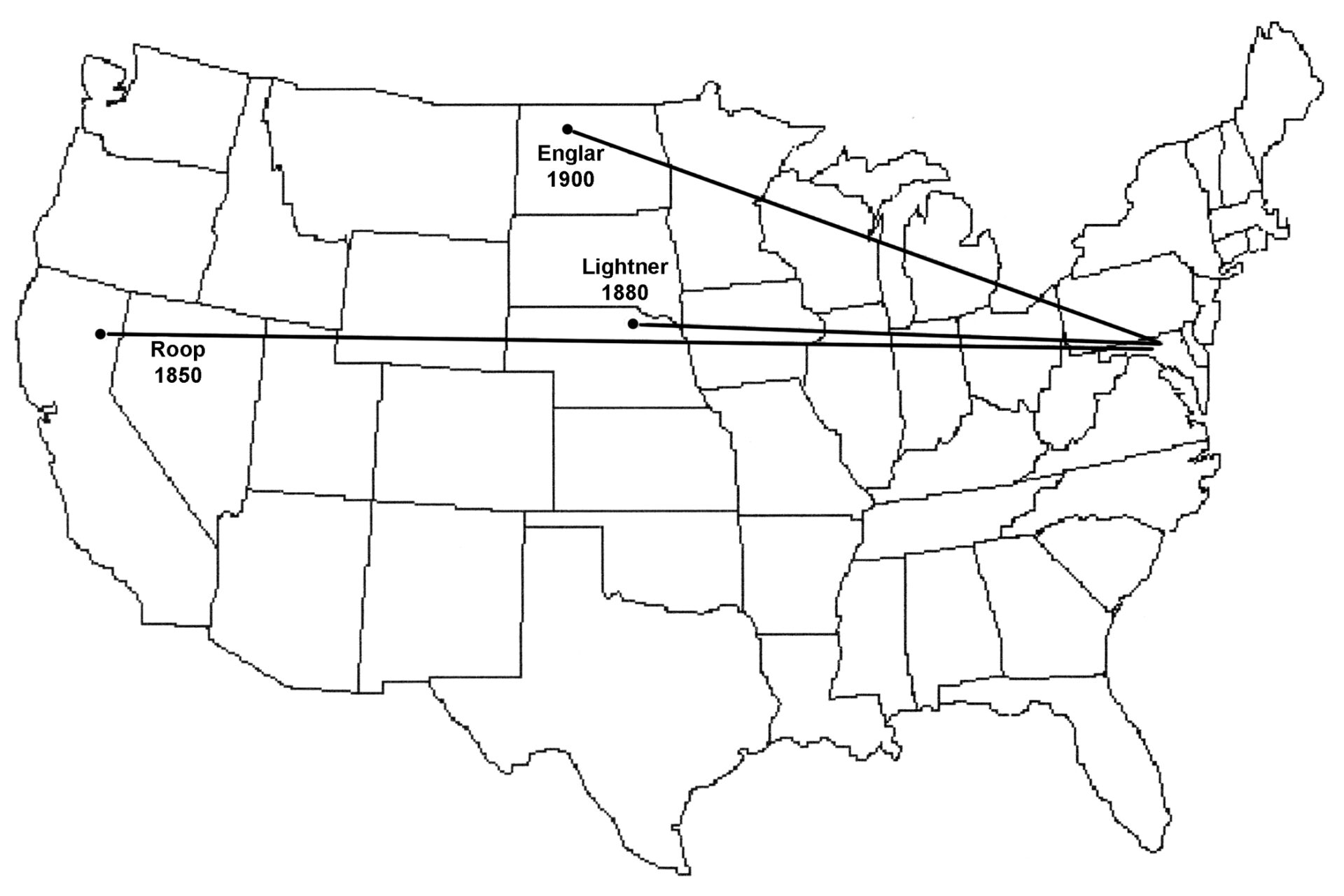 Photo caption:  During the nineteenth century, some Carroll County families headed to various parts of the West.  Isaac Roop settled in northeastern California; others settled on the Great Plains – Nebraska and North Dakota.