Nothing except the name “Fairground Village Shopping Center” at the east end of Main Street in Westminster suggests that this was the site of the early Carroll County Agricultural Society fairs.  Thirty prime acres and a number of buildings just off the Baltimore Turnpike were dedicated to the County’s most important source of income – agriculture.  Today, the Ag Center off Smith Avenue behind the Carroll County Farm Museum replaces the old fairgrounds and is home to the 4-H Fair each summer.

A newspaper article written at the time of the first fair in the autumn of 1869 reads almost like a report on a modern event.  “An extensive frame building 85×45 feet has been erected for the purpose of exhibiting articles which would in any way be effected (sic) by the weather.  As this building is to be permanent, great care has been taken to have it conveniently arranged…”  David Fowble was superintendent of the grounds and in charge of construction at the time.  The entire area, which included a racetrack, was enclosed by a board fence.

Besides the exhibition building, a large structure for its time, there were accommodations for horses and cattle.   “All the stalls are well roofed, and the conveniences for feeding and watering could not be better; there are also pens for sheep and hogs, which are so situated as to afford the exhibitors every possible advantage.”  There was no shortage of animals entered in the first fair according to the newspaper.

But it wasn’t just animals that could be exhibited, it was anything grown on a farm or in a garden.  Fruits, vegetables, even minerals could be displayed and were eligible for prizes.  Women were encouraged to show off their handiwork – either fancy articles or practical items for the home.  Just in case Carroll County had any latent Rembrandts or Monets, a large area of the exhibition building was set aside for a display of paintings and drawings – “something similar to the room in the Maryland Institute.”   After all, the world-famous sculptor William Henry Rinehart was a local boy who had “made good” and others with talent might be discovered.

Everyone was encouraged to enter the competition.  “Let no one stand back because they think their article will not take a first-class premium.  Make the effort at least.  If not successful on this occasion, you can learn something by examining the entries of those that do and by the time for the next Fair you will have your stock in better condition.  Enter any and everything, the prizes are worth contending for… Do not fear that there will be too much competition; if you gain the prize or diploma greater will be the honor.”

In addition to the exhibitions, a popular attraction was horseracing over a large, carefully groomed track.  Grandstand seating for approximately two thousand fans flanked the judges’ stand.  Although the newspaper does not mention wagering, that probably added to the excitement.

Throughout much of the U.S., agricultural fairs have brought together farmers and craftspeople from the nineteenth century to the present, offering them both pleasure and prizes.

Photo credit: From the Illustrated Atlas of Carroll County by Lake, Griffin and Stevenson, 1877. 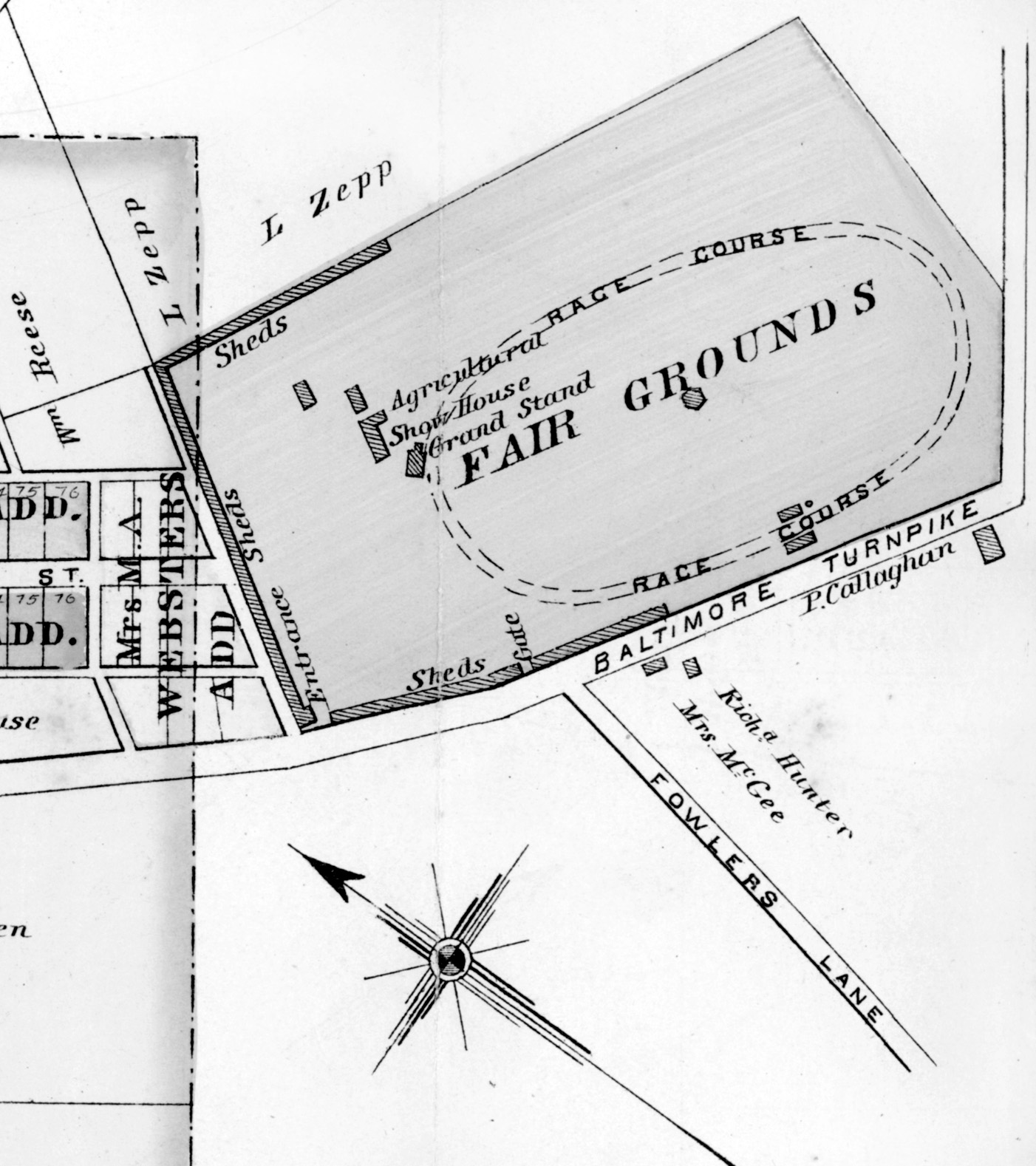 Photo caption:  An 1877 map of Westminster shows the location of the Carroll County Agricultural Society Fair Grounds at the eastern edge of the city – long before the Route 140 Bypass and Route 97 were constructed.