Sykesville’s attractive, newly-printed brochure with a walking tour of the town also mentions several important incidents that occurred in the area during the 1800s.  The Sykes Mill Railroad Riot of 1831 piqued my curiosity.

In July 1828, the cornerstone of the Baltimore and Ohio Railroad was laid with great ceremony in Baltimore.  In attendance were dignitaries of all sorts including the venerable Charles Carroll of Carrollton who, at nearly 90 years of age, sank a silver spade into the earth and “prophesied the success of the great work”  in which he was investing some of his vast wealth.

Within two years, the B&O reached Ellicotts Mills (now Ellicott City) and soon track was being laid further west by hundreds of Irish, German and black workers.  Truxton Lyon of Pennsylvania received the contract to build the seventeen mile stretch between the Forks of the Patapsco (just east of Marriottsville) and Parrs Ridge (Mt. Airy).   The track in that area would be constructed of long stone blocks topped with iron rails on which the wheels of the carriages would roll.  Lyon’s workers were responsible for quarrying the blocks (which might be many feet in length) as well as laying them and attaching the rails with spikes driven into holes drilled at precise intervals.   The holes contained wood plugs to firmly anchor the spikes in the stone.  If the spikes weren’t driven properly, the stone blocks could break, negating countless hours of hard labor.

This was the pre-locomotive era when horses hauled carriages along the tracks.  Though horses lacked the power of locomotives, the smooth tracks increased their pulling capacity roughly ten-fold.  The horses were exchanged at various points with Sykes Mill (Sykesville) probably the first stop west of Ellicotts Mills.

On June 20, 1831, Lyon’s workers at Sykes Mill walked off the job.  In his early history of the B&O, James Dilts says, “[The incident] involved Irish laborers, plenty of whiskey, and no pay for hard work, a volatile mixture every bit as explosive as the black powder used to bring down the cliffs…”   Railroad laborers often lived in windowless shanties, including those with families, and earned $12-$14 per month doing work which was not only hard but also dangerous.

After more than a week of accusations exchanged between the B&O and the contractor, the striking workers were offered less than they were owed and retaliated by destroying parts of the finished track.  A sheriff, accompanied by local landowner George Patterson, tried to deliver a warrant to the strikers on June 30 but was confronted by 135 angry men armed with stone hammers and other tools marching with Hugh Reily, their leader.   The sheriff retreated, then called for help from the militia!

That night, one hundred members of Baltimore’s Light Brigade took the railroad as far as they could, disembarked, and marched on to Sykes Mill where they surprised the workers early in the morning.  A total of sixty-eight strikers were arrested.  Although most were ultimately released, over $6,000 worth of damage had been done to the line, the quarries, and the culverts in the meantime.   To make amends to the workers, the B&O temporarily offered provisions to their wives and children.

Following the strike, Lyon’s contract was given to someone else; the workers returned to their jobs with better contracts; and stone blocks were abandoned in favor of wood ones for the remainder of the railroad’s construction.

Sykesville’s Gate House Museum contains more details about this important labor incident and you can see one of the stone blocks with its holes to attach the rails outside St. Barnabas Church in Sykesville. 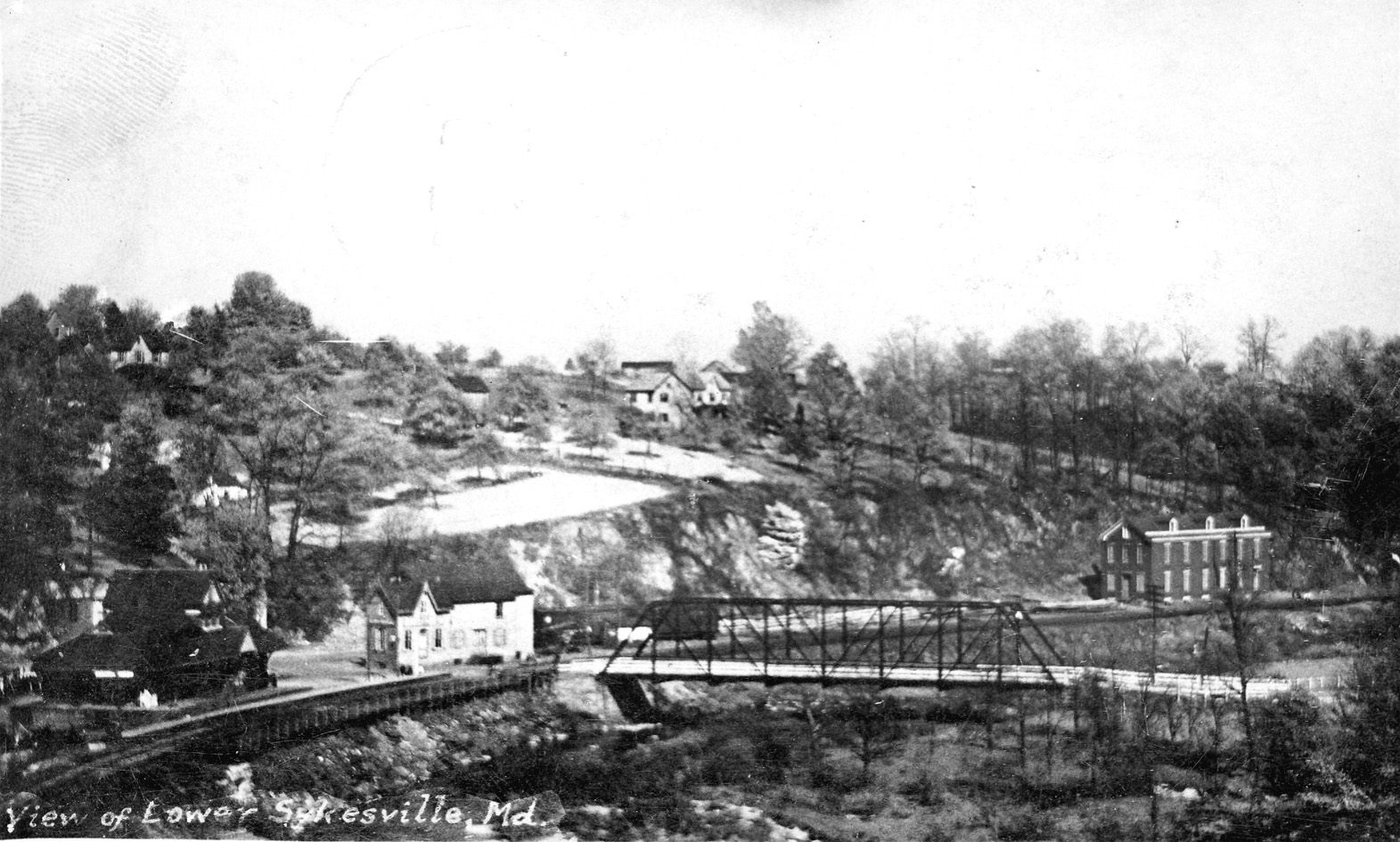 Photo caption:  Although this photograph was taken long after the 1831 Sykes Mill strike, it shows the B&O tracks along the Patapsco River.  The B&O station designed by E. Francis Baldwin and built in 1884 can be seen at lower left.