Memorial Day conjures up so many powerful images – images we should not forget amidst the pleasures of family picnics and other outings.  When Mary Shellman first urged the people of Carroll County to observe Decoration Day in 1868, it was to pay tribute to the sacrifices of “The Boys in Blue” who had laid down their lives to save the Union.  Gradually, the tributes were extended to those who had fought on both sides of the Civil War, and eventually Memorial Day became an opportunity to remember the dead from all of America’s wars.

A particularly memorable observance comes to mind from the late 1940s when my family was living on the New Jersey shore.  One crystal clear May morning we gathered along the beach to watch as local Coast Guardsmen pushed a lifeboat through the surf, rowed out several hundred feet and tossed wreaths into the nearly-still ocean while a band played the Marine Hymn and someone followed it with “Taps.”   It must have been the first time I thought of the Atlantic as a vast cemetery.

In their comprehensive book Tours of Duty: Carroll County and the Vietnam War, Gary Jestes and Jay Graybeal have done an excellent job of integrating that war into the history of our county.  There are biographies of a number of prominent local men who are Vietnam veterans including former  State Delegate and State Treasurer Richard Dixon and Carroll County State’s Attorney Jerry F. Barnes.  Biographies are also included of men from the Army, Marine Corps and Air Force who gave their lives on the other side of the Pacific.

Jestes and Graybeal searched through county newspapers to show how the war was chronicled between 1965 and 1975 and to find articles relating to local men and women who served overseas.  The names of our men who were killed are not only engraved on Maya Lin’s dramatic black granite Vietnam Veterans Memorial on the Mall in Washington, D.C., but also listed on Carroll’s own Vietnam Memorial located on Willis Street in Westminster next to the Courthouse.

The story behind our Memorial is an interesting one.  In the late 1980s, as America’s attitude toward participation in the Vietnam War changed, Maryland wanted to erect a Vietnam Memorial for her sons and daughters and asked each county to raise funds for the project.  Carroll was the only county to meet its fund-raising goal.  When money was left over from the Maryland project, Carroll County was allowed to use the excess funds for a local tribute.  The County donated land and three engraved panels were erected in a park-like setting on a quiet street.  One panel features a combat scene; another features a humanitarian scene; and the third panel intertwines the outlines of Vietnam and Carroll County.  It bears the names of eighteen local men killed and one man missing in action.

Close to 4,000 men and women from Carroll County participated in the Vietnam War and this Memorial, dedicated in 1990, “was built due to the love and compassion of the citizens of Carroll County and fellow Vietnam Veterans…” 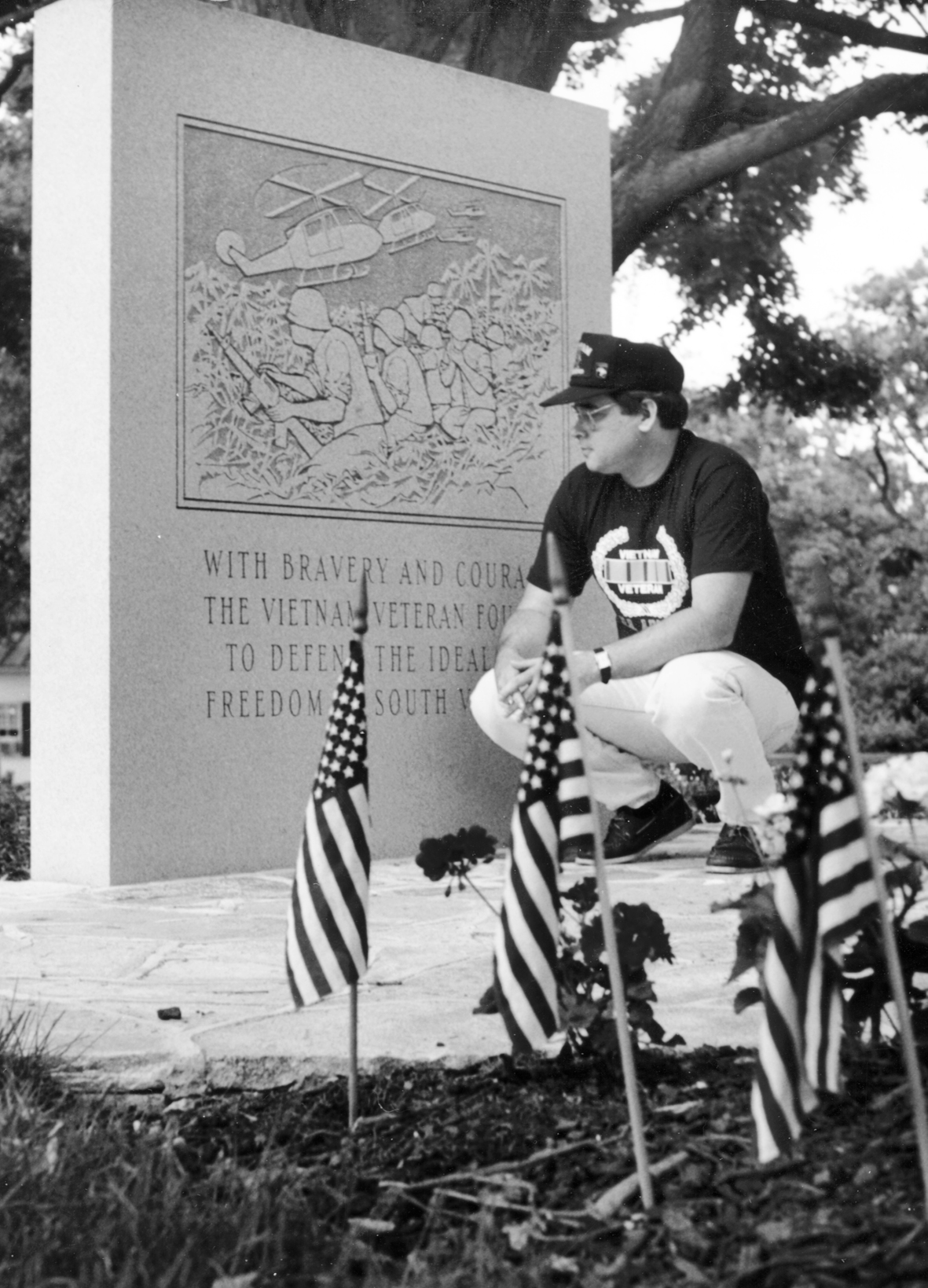 Photo caption:  Gary Jestes, co-author of Tours of Duty: Carroll County and the Vietnam War, is shown here beside one panel of the Carroll County Vietnam Veterans Memorial in 1990.