John Heywood, a sixteenth century English playwright, coined the phrase, “Many hands make light work.”  It’s a wonderful saying which speaks to cooperation and making hard tasks more palatable.  Our ancestors, lacking the technology now at our fingertips, knew the benefits of working together.

On April 21, 1915, a Taneytown resident named Abraham Hahn was very sick, but he was a farmer with important plowing to be done which couldn’t wait until he felt well enough to tackle a 30-acre field.  Fourteen of his relatives and friends gathered at his place with their three-horse plow teams and between 7 a.m. and 5:30 p.m. they accomplished what might have taken Abraham two weeks working alone…when he was healthy!  As a Westminster newspaper stated, “[It] made a Western scene…”

There is nothing to indicate whether Hahn received further help, but this kind of neighborly cooperation wasn’t unusual in our area.  Among womenfolk, quilting bees were common ways to shorten the time spent making elaborate bedding and brought much-needed social interaction when neighbors might live a quarter-mile from each other.   Apple-butter was often made by several women who either took turns stirring one large pot or had several pots cooking at the same time.  Certainly gossip-sharing must have been an important part of these gatherings.

Carol Lee’s book, “Legacy of the Land” talks about other jobs which depended upon a pool of labor.  “Harvest time, barn raisings and corn husking similarly became a sort of community party.  On these occasions, the work might have seemed an excuse for the true object of eating.”   Carroll County native Joshua Hering recalled, “While the cornhuskers were engaged at the pile, there was a commotion in the house.  The Female portion of the establishment, with as many neighbor women as you could count, were engaged in preparing supper.  This supper always consisted of Chicken Pot-Pie…No corn husking supper would have been considered up to standard, that did not embrace Chicken Pot-Pie, and plenty of it.  It was regarded as essential to a Husking as Pound-Cake was to a Wedding.”

Hering also remembered the team effort which went into the bi-annual cleaning of a mill-race – the narrow stream which directed water from a creek or pond toward the mill wheel.  Silt accumulated along the bottom of the race and its earthen sides often collapsed over time.  No mill owner could afford to shut down his mill long enough to clean the race by himself or even with help from several sons if a mill race were several hundred yards long.   Hering’s father owned a grist mill, so he was thoroughly aware of the importance of repairing a race.

“The preparation for [cleaning] consisted in drawing the water from the race the evening before, and in doing this all the fish that were there, were brought down to the lower end…The work of cleaning the race usually took about fifty men for the day; and while it was work, and very dirty work at that, the day was a sort of Gala-Day, and the man who was not invited…considered himself slighted.” 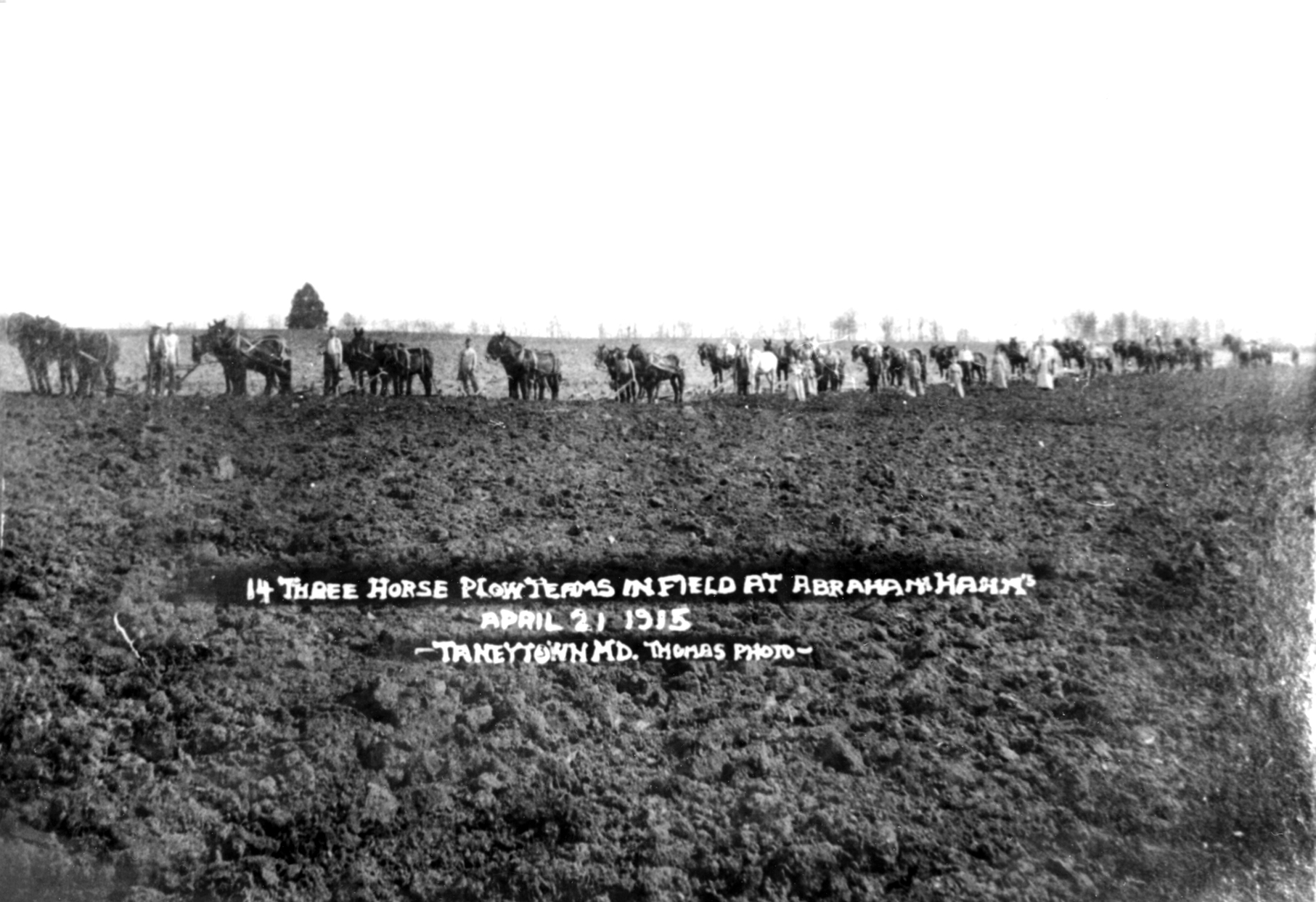 Photo caption:  A photographer named Thomas captured this amazing scene of fourteen three-horse plow teams on a farm near Taneytown in the spring of 1915.