Some buildings just happen to sit in the midst of history.  While you can say that many places on Westminster’s Main Street fall into that category, few have witnessed so many interesting events inside their walls as Odd Fellows Hall, now the home of Opera House Printing.

Today the three-story brick building at 140 East Main looks almost as it did when it was built for $9,000 by Salem Lodge #60 of the Independent Order of Odd Fellows and dedicated in 1858.  Probably the largest building in the County outside of the Courthouse at the time, it quickly became the prime location for activities of all sorts.

Shortly before the Civil War, a local military “guard unit” with Southern sympathies met in the Odd Fellows Hall.  With the outbreak of hostilities, Federal soldiers arrived from Baltimore to disarm and oust that group.  On June 29, 1863, a handful of men from the 150th NY Infantry Provost Detail who were headquartered in the building charged out the door as Confederate General J. E. B. Stuart and his huge cavalry division rode into town.  They wound up being captured, but Westminster was only briefly in Rebel hands.  The 150th departed at the end of summer.

Later that year the Westminster Library, with its collection of about 300 books, opened in the Hall each Friday afternoon to offer literature to “persons of all creeds.”  The building, from its earliest years, served many purposes – newspaper office, concert hall, oyster saloon, stage for plays and vaudeville performances, meeting place for a variety of organizations and finally for manufacturing.

In 1894, a tornado whipped through the city, tearing off the roof and demolishing a wall, but the building was soon repaired and events resumed on its stage.  The nickname “Opera House” probably stems from the 1909 decision by the Odd Fellows to create a special opera room.  That opened in 1912 and became the town’s first movie theatre.

An event called “Class Night,” which was associated with graduation from Westminster High School, attracted about 400 people in the 1920s, so we have an idea of the audience size the building could accommodate.  It was here in the early 1930s that government representatives presented speeches to explain President Roosevelt’s New Deal programs, but the Hall still continued to serve as a place for entertainment as well.  By the late 1930s, at least part of the building was being used for production of men’s and women’s clothing.

Perhaps the most famous person to ever appear at Odd Fellows Hall was the abolitionist Frederick Douglass in October 1870.  The American Sentinel reported his speech “delighted those who were fortunate enough to hear it…the opinion of all present was that Mr. Douglass ranks as an orator among the very ablest of our country.”

At this year’s Corbit’s Charge Commemoration taking place June 26-28, Michael Crutcher, Sr., who closely resembles Frederick Douglass, will interpret Douglass’ life at 2 p.m. on June 27 and 11:30 a.m. on June 28 in a tent on the grounds opposite the County Office Building, North Court Street.  The event is free. 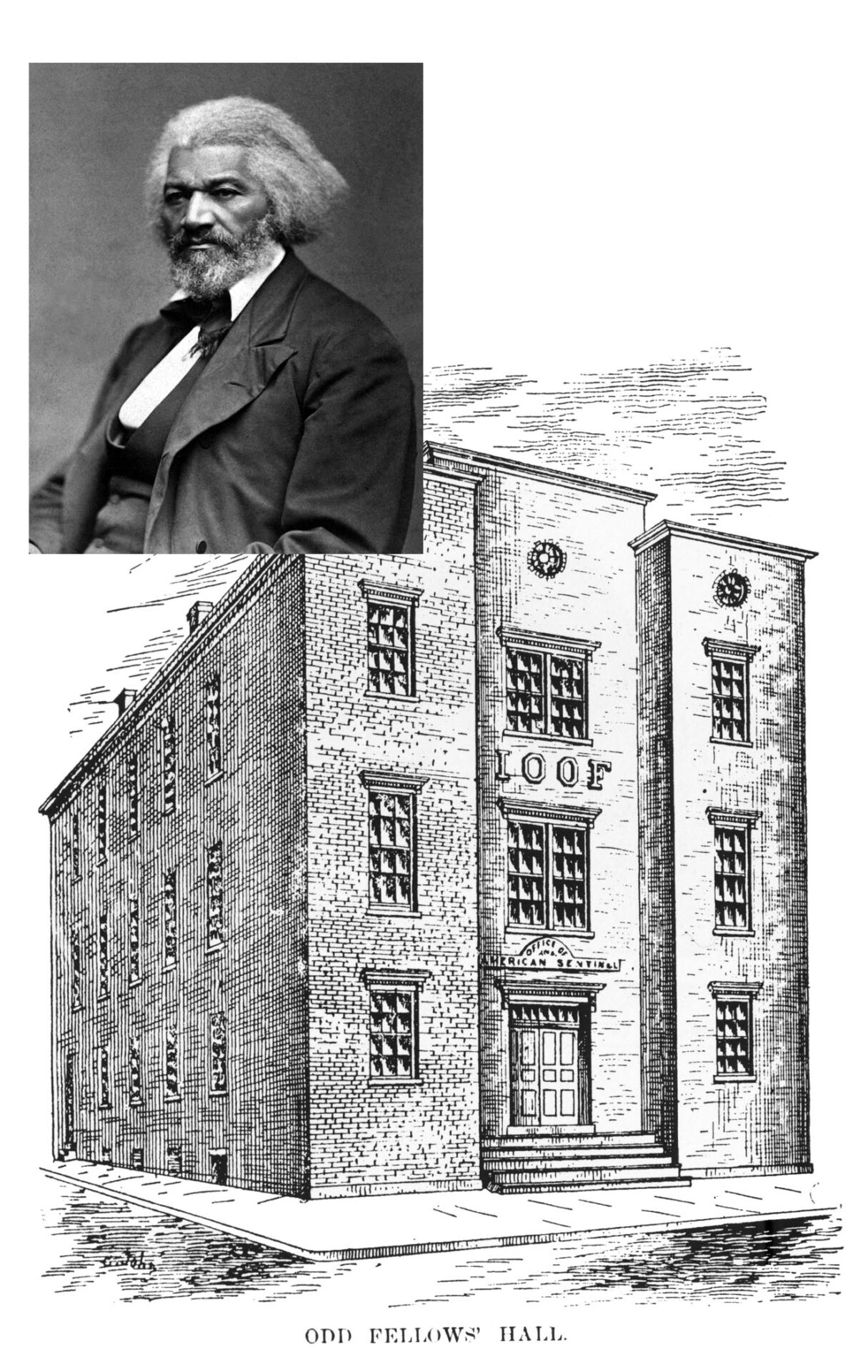 Photo caption:  An image of Frederick Douglass is inset beside the Odd Fellows Hall, Westminster, as it appeared about 1885.  Douglass spoke to a large, integrated audience there in October 1870.