If you’ve never looked at one of Carroll County’s newspapers from the 1800s, you might be surprised at what you will find.

Contrary to today, there were no sensational headlines screaming “Read me!” on the front page of what was a four or six-page weekly paper.  Instead there were some advertisements, poetry, and stories nestled among other relatively mundane articles.  If you were following a serialized story, you might be sure to read every issue, but it probably wasn’t the front page which convinced you to spend a few pennies.

Inside, you’d find national and international news, with special emphasis on the activity of the political party the paper supported.  Westminster’s American Sentinel favored the Republicans and the Democratic Advocate had a Democratic slant.  There was usually correspondence of a gossipy nature submitted by residents of communities that didn’t have their own newspapers.  The writers listed who was sick; who recovering; who had a party; who recently harvested an extraordinarily large potato or beet; and other tidbits of information.  Important local news appeared on page two or three, but none of the headlines stretched over several columns in large, bold type.

An article describing a devastating fire in Westminster that took place April 9-10, 1883, appeared on page three of the April 14th Democratic Advocate.  While it occupied many column inches, the sensationalism we see today was different back then.  There were no photos to accompany a story.  You read what happened if you were literate, or someone else would read it to you.  Nevertheless, reporters incorporated sensational aspects into the stories they wrote.

For example, in describing the above fire which killed two people, it was noted that, “The unrecognizable remains of the unfortunate young men were found by Mr. William Shaeffer and others, near where the rear end of the stable stood, the remains being intermingled with those of the horses and debris.  They were taken to the Montour House [hotel], and viewed by many persons, whose indignation was aroused and threats of vengeance on the originators of the fire were made.”  The reporter’s words certainly left vivid images in a reader’s mind!

Other newspapers didn’t shy away from graphic descriptions either.  The following report of the death of a Carroll County man appeared in the Baltimore Sun on January 9, 1857. “Fatal Accident – Mr. Jacob Hicks, a farmer, residing near Hampstead, in Carroll county, met with a fatal accident on Wednesday afternoon, about five o’clock. It appears that he was returning home from this city, and whilst near the Hookstown road with the team which he was driving, fell from the saddle horse to the ground, whereupon one of the forewheels of the wagon passed over his breast and inflicted such internal injuries as to cause his death in a short time afterwards.”

What was it about human nature which lured people to watch public executions in the past including some here in the courtyard of Westminster’s jail?  Although we are excluded from such gruesome events today, we can watch comparable ones in color on television most evenings. 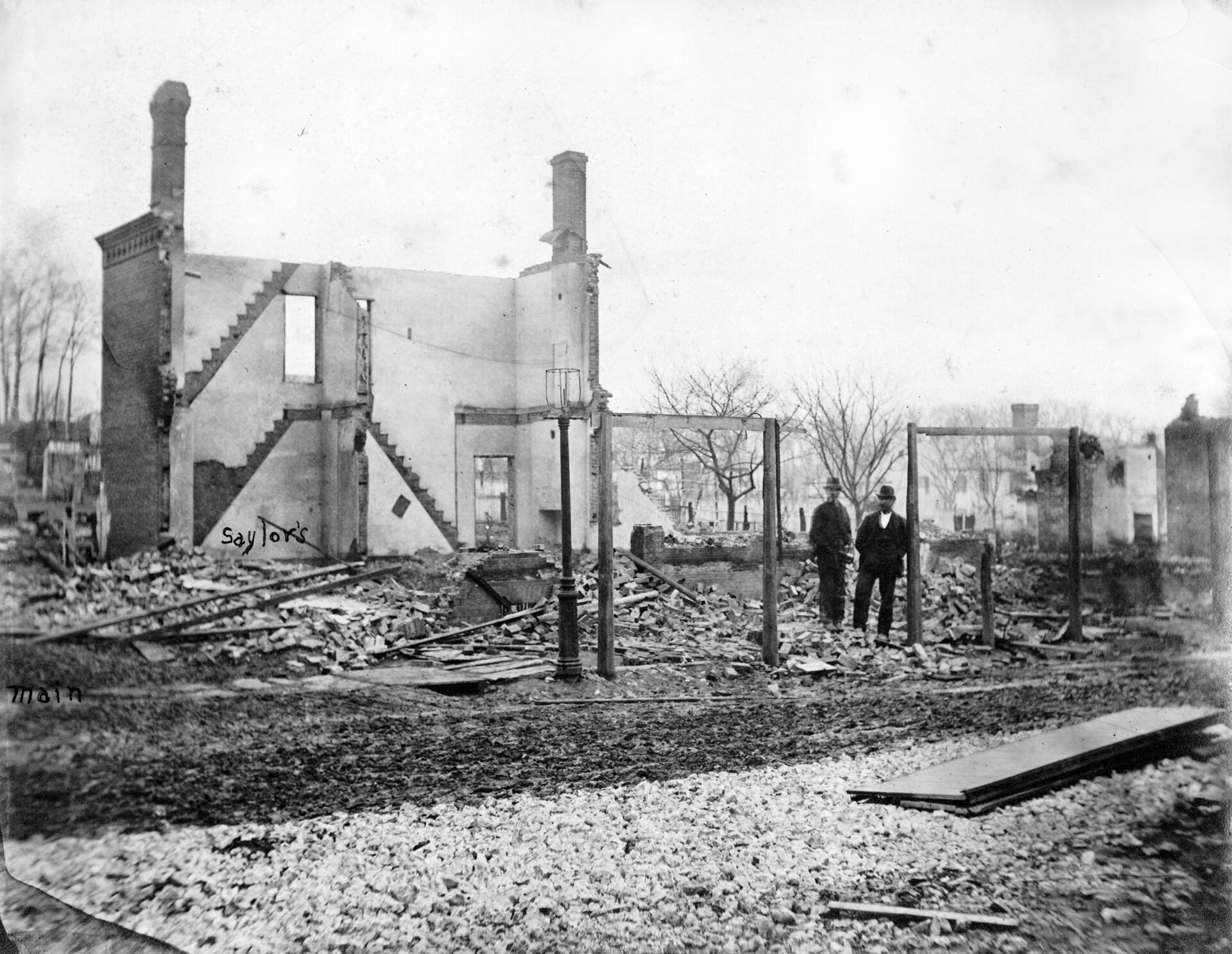 Photo caption:  A devastating fire that began in a stable swept through part of Westminster on April 9-10, 1883, and left behind scenes such as this one.  The photo was taken between John and Carroll streets on the north side of West Main Street.