Several articles from local newspapers in 1859 and 1860 hint at a story involving escaping slaves and the Underground Railroad, but only recently have fascinating details emerged thanks to Jenny Masur of the National Park Service’s Network to Freedom program.

On November 2, 1859, Dr. William Boyd was arrested in New Windsor, thrown in the Carroll County jail, and held for several weeks on $6,000 bail before being taken to Washington, D.C.  He was charged with “abduction of slaves,” a crime during that period.  Although apprehended here, Boyd was a resident of Washington, and the two slaves he was transporting belonged to D.C. residents.   Exactly who tipped off authorities that Boyd was in New Windsor is unknown.  His destination was obviously somewhere north of the Mason-Dixon Line.

William Boyd (1820-1884), Irish by birth, arrived in Washington around 1856 and joined a group of citizens who actively opposed slavery.  One of the more radical members of the group, he began hiding and transporting runaway slaves as a “conductor” on the Underground Railroad.   The Evening Star, a Washington newspaper, referred to him as “Another Osawatomie Brown on a Small Scale.”  Osawatomie was a nickname given to the well-known abolitionist John Brown of Harper’s Ferry fame.

Details of Boyd’s method of operation came to light during his D.C. trial.  He made his living peddling produce so traveled frequently into the countryside with a wagon and team of horses to buy fresh fruit and vegetables.  A black curtain hanging at the back of his wagon covered a compartment where he hid slaves.  Anyone peering in from the front assumed the wagon ended at the curtain.   One Carroll County witness at the trial testified he had seen Boyd passing through twice before, and that he drove over rough terrain rather than using a good road, probably to avoid close observation.  Other evidence linked Boyd to another slave caught locally several months earlier.

The two slaves discovered in Boyd’s wagon in New Windsor were husband and wife but belonged to different Washington residents.  The owner of the husband allowed his slave a great deal of freedom within the District, but the owner of the wife kept closer tabs on her slave so was immediately aware when the woman vanished.  When notified that her slave was held in Westminster, she came here to identify her.

Dr. Boyd was convicted on two counts of stealing slaves and sentenced to fourteen years in jail, but on October 3, 1861, he was pardoned by President Lincoln at the urging of 54 members of Congress, penitentiary officials, and highly respected citizens of Washington.   Just six months later, Congress passed a law emancipating all slaves within the District.

In June 1865, William Boyd once again went to the defense of Washington’s black citizens.  He threatened rowdy soldiers looting and beating blacks near Virginia Ave. and 1st Street S.W., but was assaulted himself, lost an eye, and nearly lost his life.  He recovered sufficiently, however, to resume working.

Today, Boyd and other conductors on the Underground Railroad, many of them unidentified, are recognized as heroes-people of great courage and moral conviction. 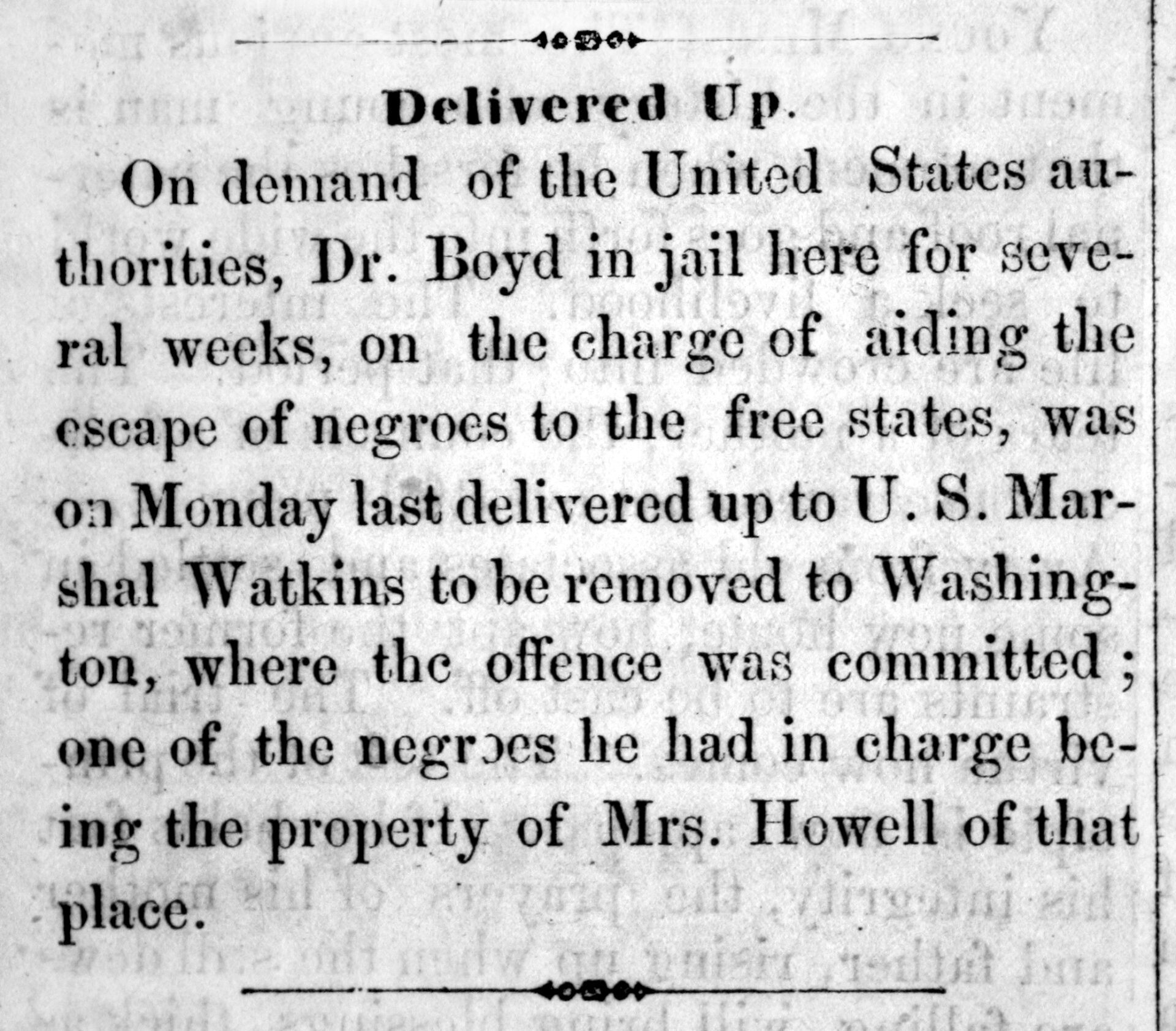 Image caption:  This short article appeared in the Carroll County Democrat on November 17, 1859, fifteen days after Dr. William Boyd, a conductor on the Underground Railroad, was caught trying to smuggle escaping slaves into Pennsylvania.