Ads Give Insight to Life

Charles Sower published a newspaper in Uniontown during the second decade of the nineteenth century known as The Engine of Liberty and Uniontown Advertiser with a yearly subscription rate of $2.00.   Issues published between 1813 and 1815 reveal what local people knew about events happening abroad as well as those closer to home.  Napoleon’s downfall was reported and the British sounded too close for comfort when they attacked Washington and Baltimore during the summer of 1814.

While there are better sources for national and international news, you can’t beat this weekly for a glimpse of life around Uniontown, New Windsor and Westminster, then part of eastern Frederick County.   Much of the information comes in the form of advertisements.   Real estate sales occupy many column inches – sometimes there are town lots, but more often 100 to 400 acre farms.  Owners of large tracts could afford ads to describe their houses, barns, woodlots, and streams.  Sometimes an orchard or mill enhanced the property value.  The owner of a blacksmith shop might want an occupant or a tavern owner needed a tavern keeper.

The advertisements left no doubt that Maryland was a slave-holding state.  Single young men “accustomed to farming” were offered for sale as well as young women with children or entire families of slaves. There were reward notices for runaway slaves with descriptions of the individuals and the clothes they might be wearing.  Rewards were also offered for runaway apprentices.

Stores truly were “general” stores as you can see from the accompanying ad which appeared in 1814. Sulphur Springs was the name often used for New Windsor.  Certainly a customer’s choices would be limited if a merchant carried a bit of everything.   For something unusual, you or a neighbor undoubtedly went to Baltimore or you did without.

Jacob R. Thomas from Uniontown made Windsor and fancy chairs and did gilding, sign painting and house painting.   Perhaps descendants of his customers still own examples of his work.  Henry Willis sold flour by the barrel.  Charles Sower, printer of the paper, also sold hymnals (for 12 ½ cents) and printed handbills, pamphlets, books, etc. “in the English language.”  No advertisements appeared for tailors, hatters or shoemakers and there were no taverns offering take-out meals as respite for the tired housewife who worked long days beside her husband harvesting crops!

A large notice appears for horse races to be run “over a handsome course near Little Pipe Creek Bridge” in August 1814 (probably near present-day Middleburg).  The races, described as “running about three miles to the heat, and repeat,” must have been grueling affairs for horses in the mid-summer weather.  Purse for the winner of the first day’s racing was $50.  Races were a popular form of entertainment and probably provided an opportunity for betting by all classes of people.

Two doctors advertised their medical practices and Uniontown resident Michael Fry said he manufactured “segars.”   New Windsor was looking for a good schoolmaster who came with recommendations for “sobriety and steady habits.”  From this wide variety of advertisements, a great deal can be surmised about life in the early days. 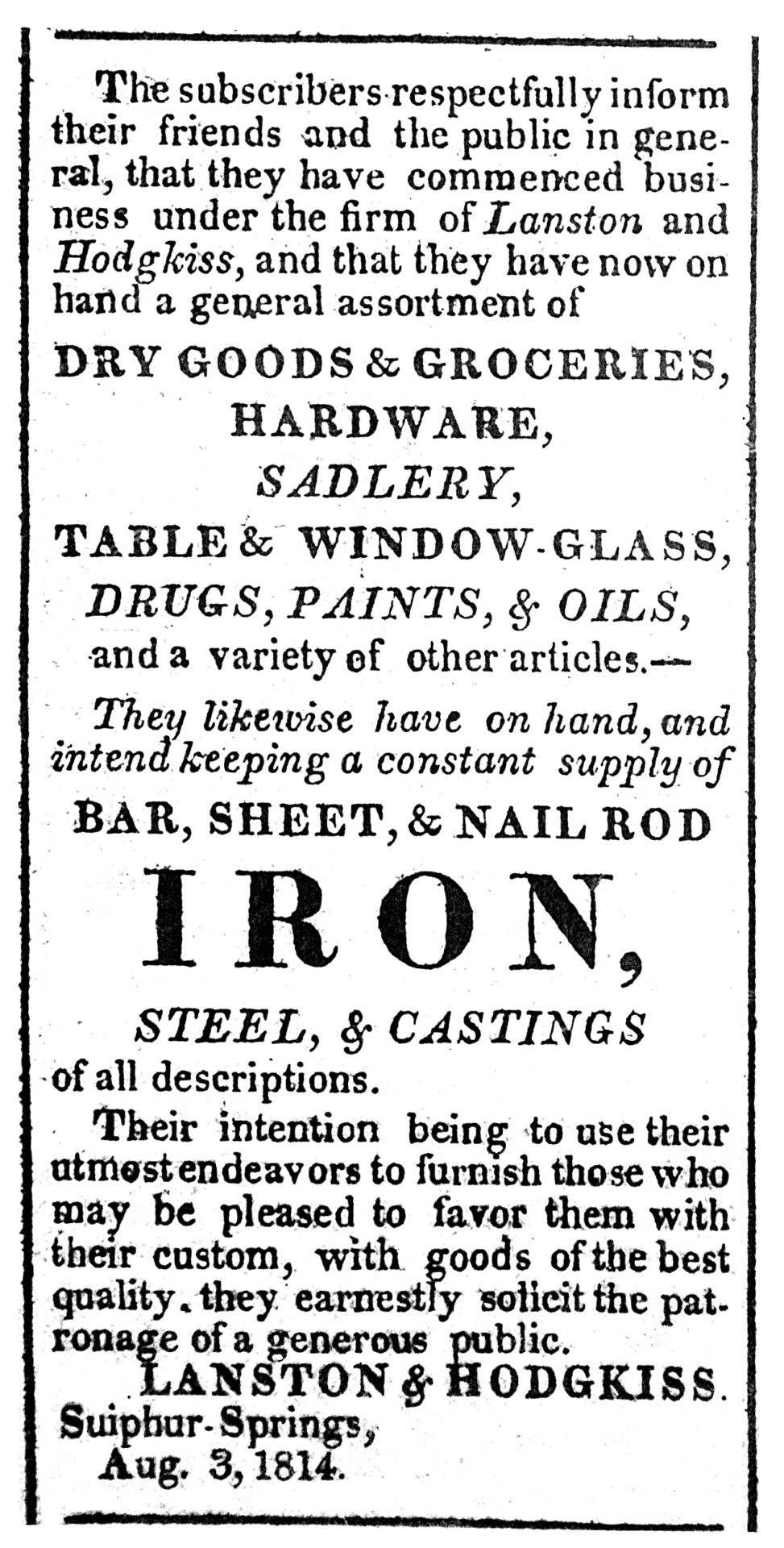 Photo caption:  This advertisement for a general store in New Windsor which appeared in The Engine of Liberty and Uniontown Advertiser in 1814 illustrates the variety of goods available in the few local stores existing at that time.