Ouch!  Many apologies to readers of this column for mistakenly calling the stream which runs past the Shriver Homestead in Union Mills “Double Pipe Creek.”  As a forty-year resident of Carroll County I have no excuse.

It is Big Pipe Creek which flows across the county through Union Mills from east to west, eventually joining Little Pipe Creek near Detour and forming Double Pipe Creek.  After a short distance, that sizable stream empties into the south-flowing Monocacy River.  Pipe Creek as a name has several interesting associations, some going back over 250 years.  The early settlement of Quakers around Union Bridge in the 1730s and 1740s went by that name and during the Civil War there was a military plan called the Pipe Creek Line.  General George Meade plotted a defensive position for his Union Army along the hills above Big Pipe Creek in order to protect Baltimore and Washington after Lee’s Confederate troops invaded Pennsylvania in late June 1863.  Once the Union was victorious at Gettysburg, the plan was scrapped.

While the Monocacy River, Double Pipe Creek and Little Pipe Creek form part of Carroll’s western border, other waterways define more of the county’s outline.  Sam’s Creek was important as a source of water power for mills in the nineteenth century, but now is simply part of the boundary with Frederick County.  Buffalo Road on the southwestern border with Frederick was an old wagon route running somewhat north-south.

The southern edge of the county follows the South Branch of the Patapsco River flowing from outside Mount Airy toward Sykesville.  Because the river actually runs east-west, the name “West Branch of Patapsco Falls” on an 1877 atlas seems more apropos.  Were you a passenger traveling on the Baltimore and Ohio Railroad a century ago, you would have been more aware of the river than you are today as they ran side by side.  I don’t think there is any passenger service on our CSX tracks (formerly B&O) these days, so we cross the Patapsco without giving it much thought…until it begins to flood.

Carroll’s border on the southeast is a dashed line down the middle of Liberty Reservoir representing a riverbed which lies beneath.  That river is the North Branch of the Patapsco which was a very distinct boundary until Liberty Dam was completed in 1954 and water began filling the low-lying Patapsco valley.  Liberty Reservoir is very full this year, but in times of drought it is much easier to appreciate the river’s original course and the small streams like Morgan Run which empty into it.

What about the other boundary lines?  The diagonal border on the northeast was drawn in 1836 when Carroll County was being carved out of Frederick and Baltimore counties.  It ran from the old Westminster-Reisterstown turnpike bridge over the North Branch of the Patapsco near Finksburg to the Pennsylvania line.

Finally, thanks to those amazingly accurate surveyors Charles Mason and Jeremiah Dixon, we have a nice straight northern border.  Their 1763-67 survey settled the long-running boundary dispute (sometimes called Cresap’s War) between the Calverts of Maryland and the Penns of Pennsylvania. 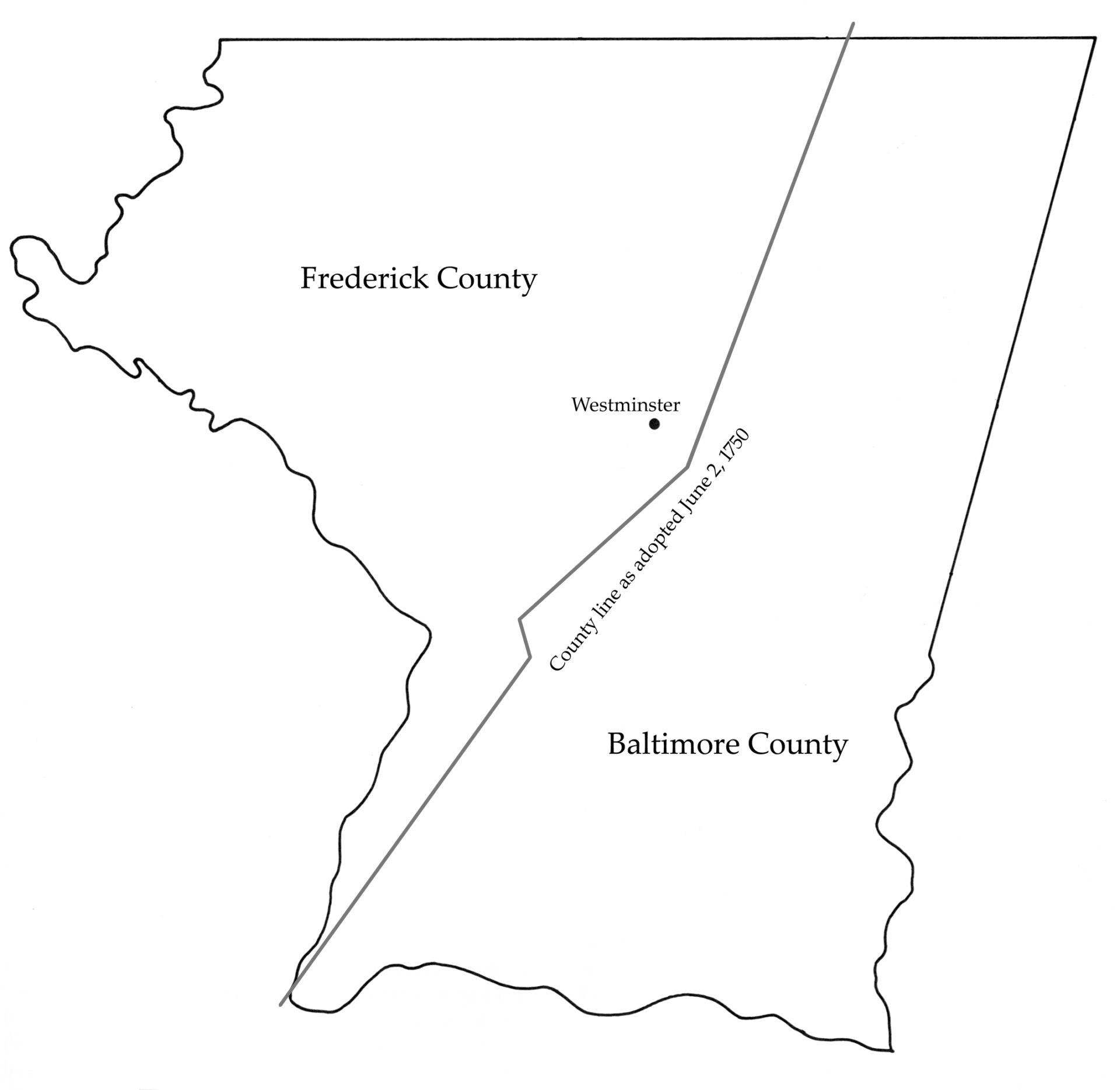 Photo caption: Carroll County’s boundaries include rivers and streams, an old wagon road, the Mason-Dixon Line, and a long diagonal line that helped carve the new county out of earlier Baltimore and Frederick counties.