So much attention is paid to the Pennsylvania German heritage of Carroll County that we often forget other ethnic groups which migrated into this area at an early date.  Piney Creek Presbyterian Church, located on the main road between Taneytown and Harney, is a reminder of the Scotch-Irish immigrants who began settling here in the mid-eighteenth century.

The Scotch-Irish, as distinguished from the Irish, emigrated from the Ulster region in the north of Ireland in the eighteenth and early nineteenth centuries.  Although some of them settled in the Appalachians, others stayed in more populated parts of the colonies.  They hailed from Ulster, but their origin was often the Lowlands of Scotland along the English border.  Even after multiple generations had been born in Ireland, their religion, their culture and their names remained Scottish.  Unlike most of the Irish who came to America during the Potato Famine, the Scotch-Irish were not desperately poor.

John McKellip, Sr., a sea captain from County Antrim in Northern Ireland whose parents were Scots, arrived in Taneytown about 1780.  Clotworthy Birnie sailed from Belfast in 1810 and settled his family just east of Taneytown.  He immediately became active in Piney Creek Presbyterian Church and was one of the wealthiest men in the area.  Several headstones in Piney Creek Cemetery state that the deceased had been born in Ireland.

Piney Creek’s congregation erected a plain log church before 1771 which had “pews straight backed and tall” and a raised pulpit with sounding board above to reflect the minister’s voice down to his parishioners.  This humble church would have been where the Birnies worshipped when they first arrived and must have seemed quite different from their church in a bustling port city like Belfast.  Clotworthy Birnie contributed money for the new Piney Creek church built in 1818 but later helped establish the Taneytown Presbyterian Church which was closer to his home.

A newspaper article written when Piney Creek celebrated its 175th anniversary noted that the maximum number of communicants (144) was reached in 1824.  Although this has never been a large church, it has served northwestern Carroll County well.  It produced several missionaries and supposedly forty-five descendants of its first pastor, Reverend Joseph Rhea, became ministers of the gospel.

Remodeling has altered the 1818 church into the traditional brick building with square bell tower you see today.  The nicely maintained graveyard with stones dating back more than two hundred years is one of the most peaceful cemeteries in Carroll County.  The sounds of passing cars on Harney Road are muffled by its thick stone walls.  Gravestones tell of long lives and short ones, of family relationships and homelands left behind.  Some stones are almost unreadable while others have withstood the test of time.  It is truly a spot worth visiting. 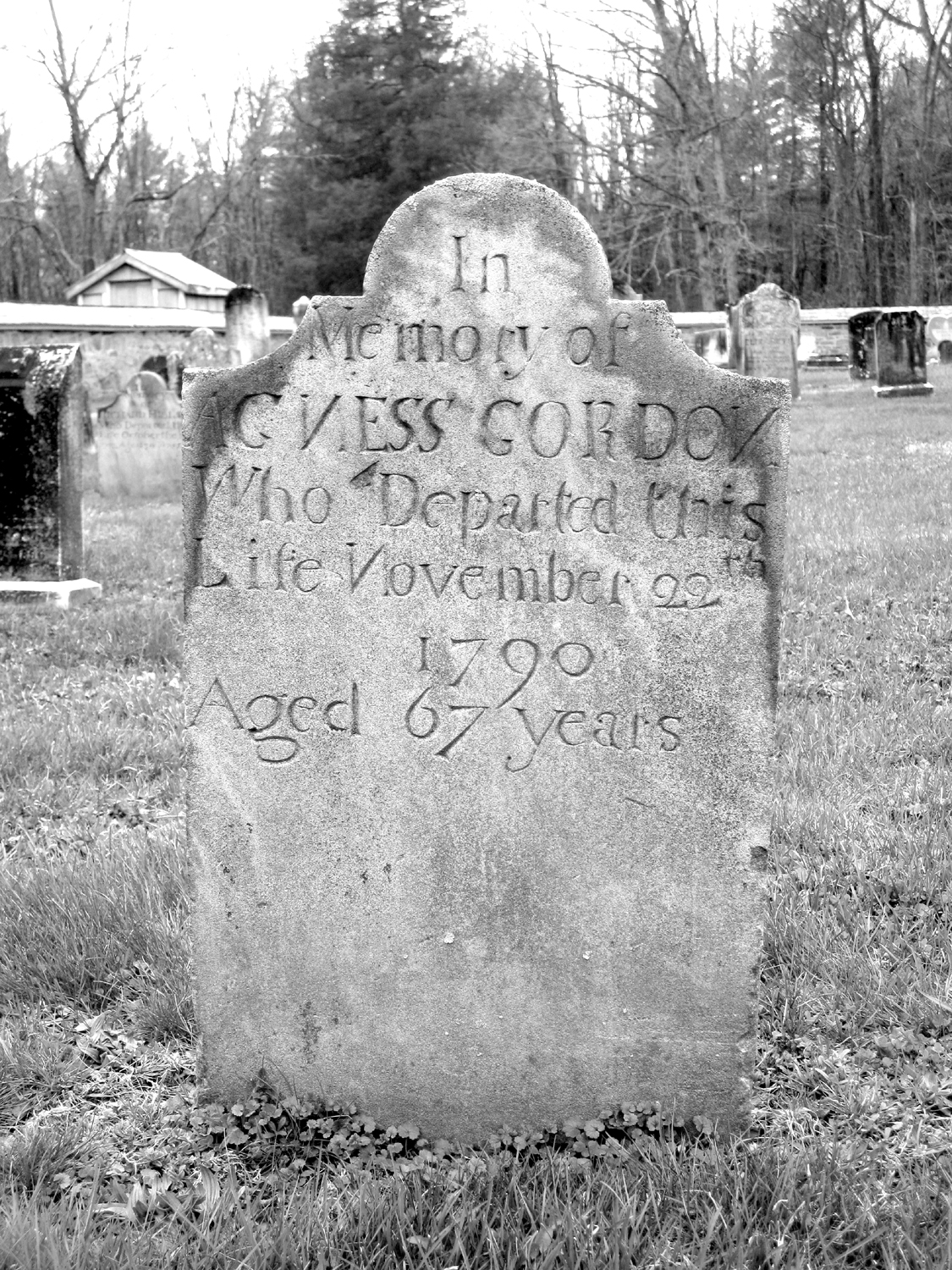 Photo caption: Agness Gordon’s gravestone in Piney Creek Cemetery near Harney is still readable after more than two hundred years.  She must have been one of the early Scotch-Irish settlers in the Taneytown area.