9 May 2010 – Remembering the Hard Work Done by Farm Women

9 May 2010 – Remembering the Hard Work Done by Farm Women

In this era of dishwashers, washing machines, rototillers, and gas or electric stoves, it is hard to envision the daily lives of farm women a century or more ago.  As today is Mother’s Day, it only seems fair to spend a few minutes reminding ourselves of the wide variety of tasks facing an eighteenth or nineteenth century woman.

Unfortunately, no local farmer’s wife left behind a detailed account of her routine, at least none exists in the Historical Society’s Manuscript Collection, but it doesn’t take much imagination to paint a picture using information from farming areas nearby.  In his book “The Pennsylvania Dutch,” Fredric Klees put it very succinctly: “Every farmer was a Jack-of-all-trades and so was his wife.”  And in 1799, Thomas Hill observed that Pennsylvania German farmers were “the most early rising, hard working people I ever saw.”  Many of Carroll’s first settlers migrated down from Pennsylvania and brought their strong work ethic with them.

A farm wife did a tremendous amount of cooking and baking…and started everything from scratch.  Perhaps she eventually enjoyed the luxury of a stove, but cooking over an open fire was the norm until well into the nineteenth century.  Her hearty meals fueled everyone for long days of work in all kinds of weather.   Housecleaning, caring for (and bearing) children, sewing new clothes and mending old ones, spinning and weaving, washing, ironing, churning butter, making candles, rendering lard  – we have just begun listing a few of the tasks the average woman would be expected to handle.

Outside the home there was another world of chores to be tackled.  Did her husband or son chop wood for the kitchen fire or did she swing an axe now and then?  In addition to raising chickens and harvesting eggs, she prepared whatever game her husband might kill.  In the days before gasoline-powered rototillers, she did a lot of hoeing in the kitchen garden, especially during those months when the weeds were growing as fast as the vegetables.

In Carroll County, she probably turned the cabbage she grew into sauerkraut, but she would have stored vegetables like potatoes, turnips, squash and carrots in a root cellar with an eye toward feeding her family adequately throughout the winter months.   She would have dried corn, peas, limas and string beans (sometimes called “making leather britches”) as well as apples and peaches.

A farm wife might help with the haying as well as bind sheaves of wheat at harvest time.  She would join others in husking corn.  Milking the cows was typically a woman’s job.  In the absence of enough male help, she might even handle a team of horses to harrow a field and at hog butchering time she stripped and cleaned pig intestines for sausage casings.

Attending market was often left to women.  In 1795, a foreign visitor in eastern Pennsylvania commented that he had seen 18 year-old farm girls riding to Philadelphia on horseback to sell their butter, cheese and poultry.  Undoubtedly, some Carroll County women must have sold their produce in Baltimore. 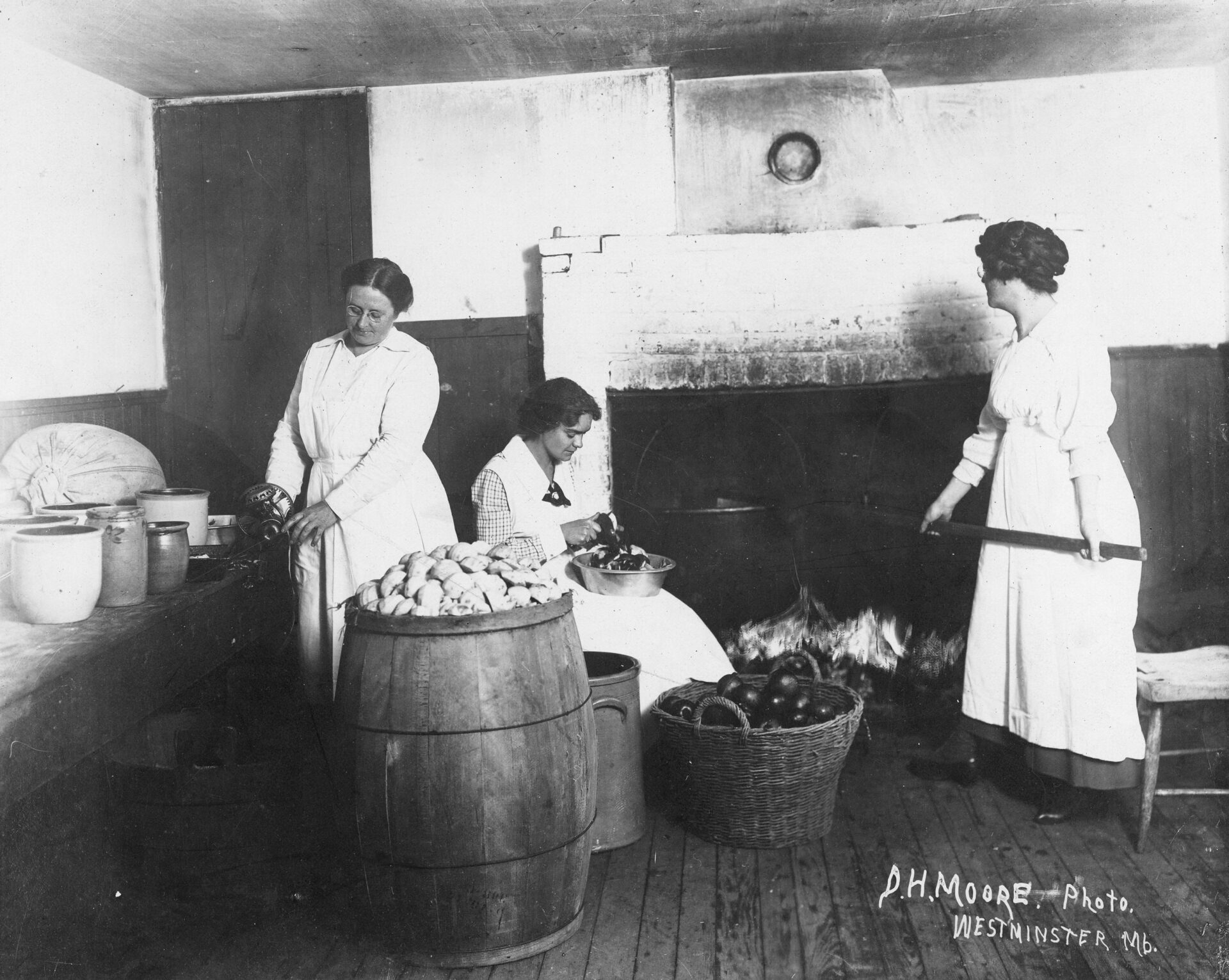 Photo caption:  In this 1918 photograph, two women are peeling apples while one stirs a large kettle of apple butter over an open fire at the Gist home near Westminster.  Preparing apple butter was a task where many hands made light work.