General Fought in Many Places Over 40-Year Tenure

Nearly one hundred years ago, Marion P. Maus, a sixty-something U.S. Army brigadier general, and his wife, decided to spend part of each retirement year living at the Dielman Inn on the corner of Main and High Streets in New Windsor. It was an interesting choice given the exotic places he had lived during his forty years in the Army.

Maus was born near Silver Spring, MD, in 1850, the son of a superintendent of the Chesapeake & Ohio Canal.  After graduating from West Point in 1874, he spent most of the next twenty years, fighting Native Americans in what are generally called the “Indian War Campaigns.”  For his bravery in one of those actions he was awarded the Medal of Honor.  Today, Americans have a very different perspective on the campaigns, but in those years, the U. S. government felt justified in clearing the way for white settlement of the West.

One of Maus’s first actions as a young lieutenant was against the Nez Perce Indians in October 1877.  He was at the Battle of the Bear Paw Mountains in Montana for the defeat of Chief Joseph and his followers. Eight years later, he became involved in the famous pursuit of Geronimo, the Apache warrior who, with his followers, was terrorizing inhabitants along the Mexico-New Mexico border.  The battleground was Mexico’s Sierra Madre Mountains, some of the most rugged country imaginable.  Maus and four other Army officers commanded 100 hand-picked Indian scouts from several Apache tribes who knew the region and Geronimo’s ways.   Years later, General Nelson Miles wrote, “The history of this expedition into Mexico, its unique formation, the almost unparalleled hardships and dangers it encountered, the tragic death of its commander, Captain Emmet Crawford, and the international phase of the affair, all give it an especial interest…”

The expedition trailed Geronimo through the mountains for about six months during 1885-1886.  Following Captain Crawford’s death, Lt. Maus assumed leadership of the group; he was the only officer able to speak Spanish and communicate with Mexican troops who were also on the hunt.   Ultimately, Maus came face-to-face with the notorious warrior and thought he had arranged a surrender, but Geronimo slipped away once again.  For his extraordinary efforts, Marion Maus received the Medal of Honor in 1894.

Many more important Army assignments lay ahead for the talented soldier.  He helped close the Indian Wars with the defeat of the Lakota Sioux in 1890 at Wounded Knee.  He traveled through Europe with General Miles to observe the Greco-Turkish War and the maneuvers of the Russian, German and French armies.  He also represented the U. S. War Department at one of Queen Victoria’s anniversary jubilees.  When the Spanish-American War broke out in 1898, Maus was assigned to positions in Cuba, Puerto Rico and the Philippines.

In 1899, he married a young Washington socialite, Mattie Lindsay Poor.  One of his groomsmen happened to be John Pershing who would later lead the American Expeditionary Forces in Europe during World War One.  Maus retired in 1913.

Oh, the stories this fascinating man must have told his New Windsor friends before his death in 1930! 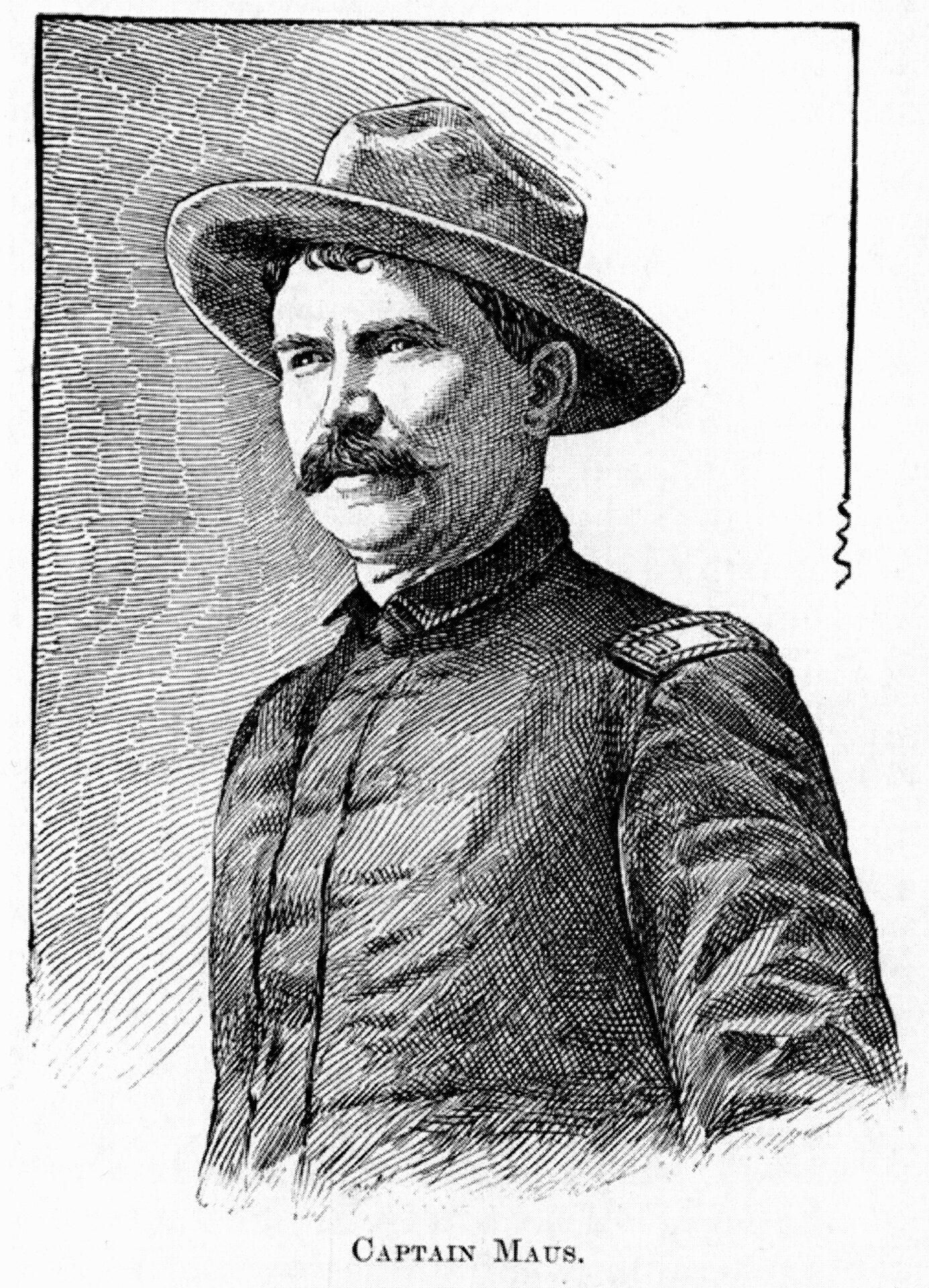 Photo caption:  This sketch of Marion Perry Maus is by the famous illustrator Frederic Remington and accompanied “A Campaign in the Sierra Madre, 1885-1886, a narrative by Lt. Marion Perry Maus, First Infantry, U. S. Army, with illustrations by Frederick Remington.”