Camp Meeting was a Marquee Event for 37 Years

With the dark, cold days of winter approaching, let’s look back at an important Carroll County summer event which occurred yearly from 1871 until 1907 – the Linwood Camp Meeting.  Started by the Uniontown Church of God as a religious endeavor, it soon became a social event as well where local people and those from as far away as Williamsport, Baltimore and Shippensburg, PA enjoyed up to eleven days in a fair-like atmosphere.

The site changed several times over the years, but was always a clearing in a grove of trees by the Pipe Creek Station on the Western Maryland Railroad just east of Linwood.  Many attendees arrived by train, but some pedaled there on high-wheeled bicycles, walked, or hitched horses to a carriage or farm wagon.

“Contemporary descriptions suggest a Fourth of July atmosphere: ‘The whole woods presented an animated scene.  Every tree in sight was the hitching post for some team unharnessed from the carriage close by.  The entire family was talking and laughing with groups and neighbors, the female contingent prettying up before making its appearance in the circle.  All was confusion.  Children tore their clothes on the bushes and cried as mothers scolded, dogs barked and fought and everybody bubbled over with excitement.’”

A week before the camp began in August, the grounds were made ready.  A huge tabernacle platform with benches which accommodated five or six hundred was erected for the religious services and an organ was brought in as well.  Supposedly, the organ in Uniontown’s former Lutheran church is a leftover from those days.  There was a separate platform to hold fifty choir members.  At night the grounds were lit by torches and large campfires.  Later, gasoline lamps replaced the kerosene torches.

Some families stayed for the entire eleven days and paid six dollars which included rental of a tent plus their board.  Others came for a day’s outing and paid fifty cents for a noon meal or twenty-five cents for supper.  Meals were served from a giant boarding tent, but snacks – popcorn, ice cream, lemonade, sandwiches, cakes, and watermelons – were available from a booth.  Men could purchase cigars and chewing tobacco.

There were three gates to the camp with two gate-keepers at each.  Admittance was five cents in the early years.  While attendance may have numbered several hundred during the week, it ballooned to thousands on the two Sundays of the meeting as trains unloaded their carloads of enthusiastic passengers.  A thousand watermelons and nearly 300 gallons of ice cream might be sold.  On one occasion, it was estimated there were 10,000 attendees.

While the Church of God had direction of the meeting, the preachers represented many different denominations and were probably pretty dynamic given the number of people who traveled great distances to hear them, although it is obvious that a religious message was not the only draw of this event.

In spite of the large crowds which came to Carroll’s most popular and long-running camp meeting, people were orderly and never once during thirty-seven years was it necessary to bring in officers for crowd control. 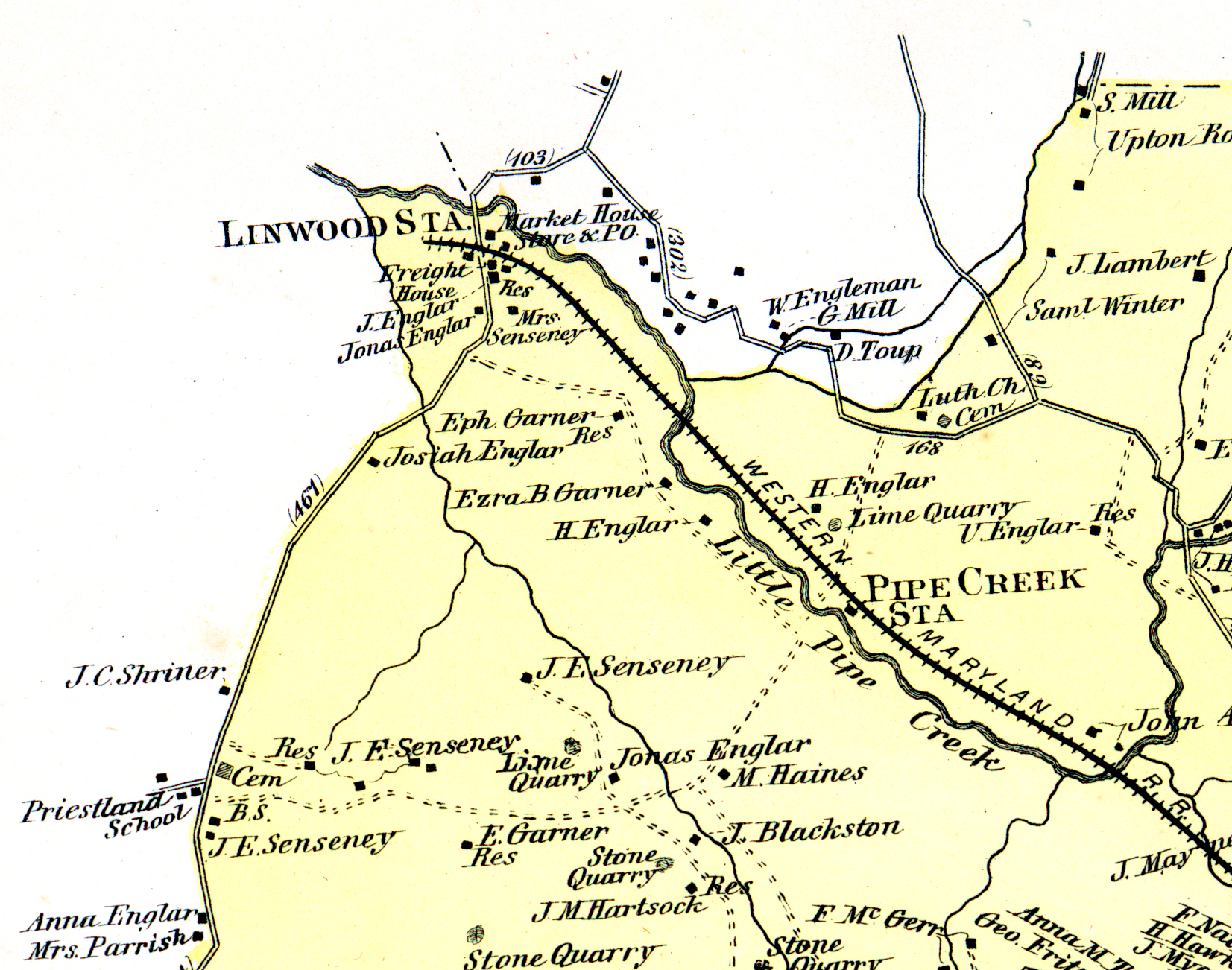 Photo caption:  This detail from the 1877 Illustrated Atlas of Carroll County shows the site of the Linwood Camp Meeting along Little Pipe Creek, half way between New Windsor and Union Bridge.  The Western Maryland Railroad dropped off thousands of visitors at Pipe Creek Station.