It seems so tragic when family bibles, especially those with births, deaths, and marriages recorded in them, end up at an auction instead of being passed down.  Just like old photo albums, these are treasures which deserve a place in our homes.  Happily, a number of local museums and the Carroll County Genealogical Society have preserved family bibles or at least the information inside them.

The McKaleb family bible, published in 1802, was purchased that same year by John McKaleb who had married Mary Ann Clingan in April 1801.  Perhaps he bought it expressly to record the important events in their life together, but he began by entering the birth of his father in 1733, and also included his and his siblings’ births.  In the years between their marriage and Mary Ann’s early death in 1816, John recorded the births of their seven children – 1803, 1805, 1807, 1809, 1812, 1814, and 1815.  Infant mortality and the frequency of childbirth are aspects of many bible records.

John and Sarah Devilbiss Hesson’s bible tells us they were married June 3, 1841 by Rev. Daniel Zollikoffer and then records the dates of birth of all their children, their dates of baptism and even the names of the ministers who performed the ceremonies.  In the days before every state required birth records, a family bible or church record might be the only source of this information.

The bible which belonged to Solomon Formwalt is especially lovely.  It was published in 1810 and apparently acquired by Solomon on January 11, 1814.  His name is beautifully written on an opening page and surrounded with flowers and a bird painted in watercolors.   The book obviously meant a great deal to him.  Although it was written in German, Solomon wrote in English, “My child was born the first day of August about 12 o’clock in the year of our Lord 1820; and was baptized the 19th instant and named: Lydiann.”  The second child “was born the 8th day of September 1823 in the morning at 1 o’clock; and was baptized the 15th day of October 1823, and named: Ludwig, or Lewis.”

Not only did officials spell family names in a variety of ways long ago, but so did the families themselves.  The Crumbacker bible is a good example.  Sometimes the name appears as Crumbacker and sometimes as Crumbaker.  This family named one of its sons Oliver Hazzard (sic) Crumbaker after Oliver Hazard Perry, the naval hero of the War of 1812.

Some bibles even contain information about a family’s slaves, and this makes them extremely valuable to anyone doing African American research.   The connection with an owner, a location, and specific dates are rare pieces of information which delight historians.

Unfortunately, many a sad tale also emerges from bible records, such as that of Sarah Lovina Cassell.  The Cassell bible shows she was born March 29, 1856.  Her January 1874 marriage to Charles B. Stoner doesn’t appear, but on March 20th of that same year, just nine days shy of her eighteenth birthday, Lovina S. Stoner’s name was entered among the family’s deaths. 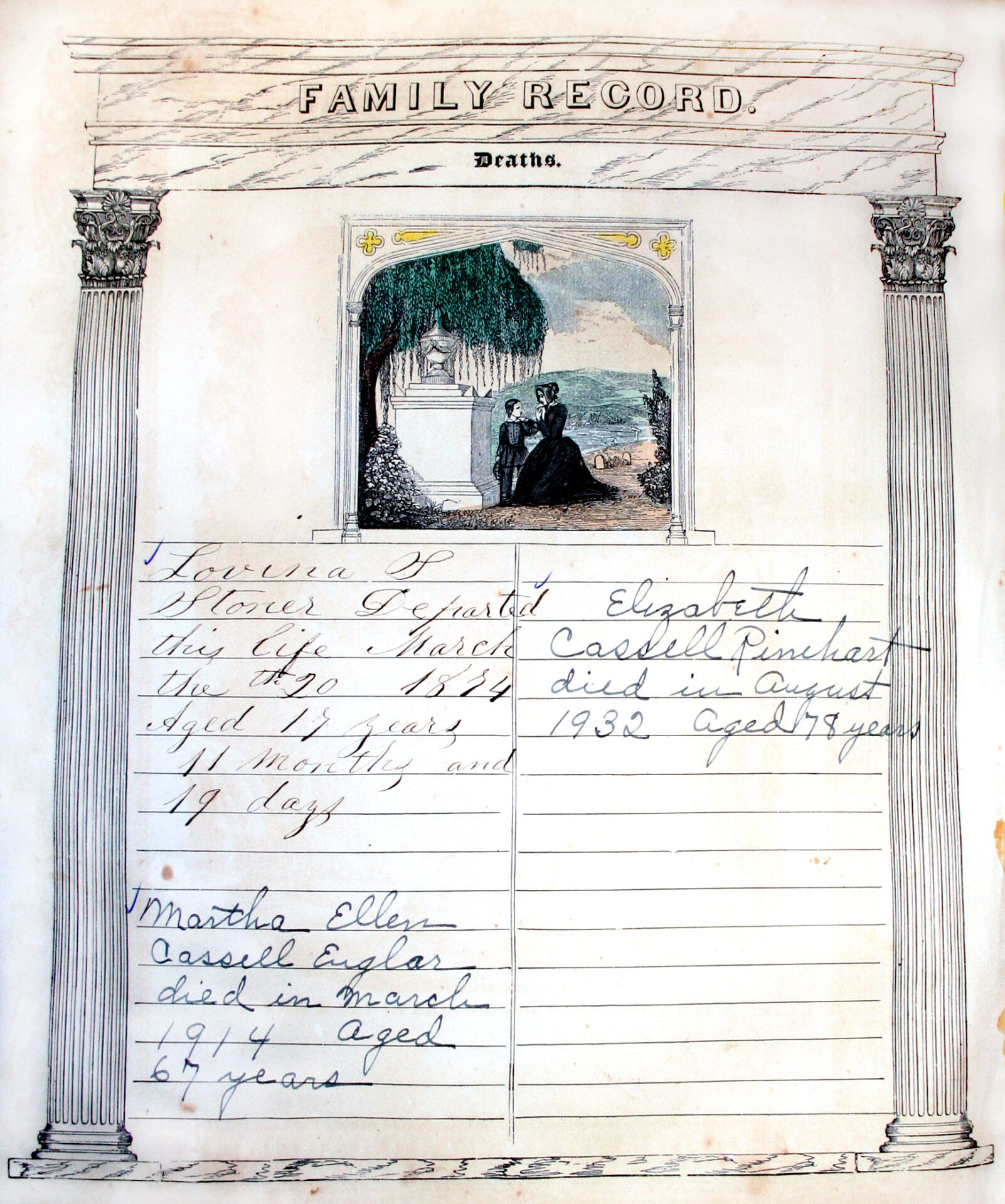 Photo caption:  A mourning scene illustrates this page from the Cassell family bible owned by the Historical Society of Carroll County.  Among the deaths recorded is that of newly-married Lovina S. Cassell Stoner who died March 20, 1874, aged 17 years, 11 months and 19 days.