If you are a genealogist, finding the gravestones of your ancestors is like dying and going to Heaven.  With this in mind, the Carroll County Genealogical Society decided to make copying local cemeteries one of its priorities when it was founded in 1981.  The project will never be complete, but Society members feel they probably have done a more thorough job than any other group in Maryland.

Considering that substantial settlement of this area didn’t begin before the 1730s with the arrival of Quakers near Union Bridge, the earliest gravestone found bears the date 1769.  It came from a cemetery outside Uniontown on land owned by Francis Scott Key’s father.  The tiny piece of local stone only protrudes about eight inches above ground and is crudely lettered “1769 ANDRES SR”

Eighteenth century stones are relatively rare in Carroll County, but they appear in old cemeteries such as St. Mary’s in Silver Run, St. Luke’s outside New Windsor, and the “God’s Acre” portion of the cemetery off York Street in Manchester.  Some of these stones are large and carefully lettered and decorated, while others are like the Andres stone.  If you don’t look closely and know you are exploring a cemetery, you might never notice the names or dates at all.

One of the most fascinating stones dates to 1774 and was carved from local sandstone.  The slab was tall, about eight inches thick, and weighed over 500 pounds when it was erected, but today it is broken into a number of large chunks.  What makes it unique is the three-dimensional image of a human skull that peers out at ground level – almost as if the deceased were peeking out of his grave.  While images of human skulls appear frequently on early New England gravestones, this is the only one around here – and the Society has copied approximately 70,000 stones!

Carroll County has a large number of cemeteries connected with churches or established independently and these are well-known, but it is the cemeteries where several generations of one family were buried in a small graveyard on the family farm which are the most difficult to locate, yet often the most valuable to genealogists.  One hundred years ago, the county was dotted with these, but they disappeared rapidly as family farms were sold and the graveyards meant nothing to the new owners.  There was also the problem of a little cemetery sitting in the middle of a field.  What a pain it was when plowing, so the stones “disappeared” or were piled next to the barn.

Farmers have been both the villains and heroes of the cemetery project.  In the past, many of them destroyed family cemeteries so now you can only discover the graveyard mentioned in an old deed; but farmers have also phoned the Genealogical Society to report a cemetery on their land.  Today, cemeteries are protected by state laws, but this wasn’t always the case.

As Carroll’s cemeteries were copied, the information was published in a series of nine books.  Very soon that information, plus corrections and additions, will be available on a single CD. 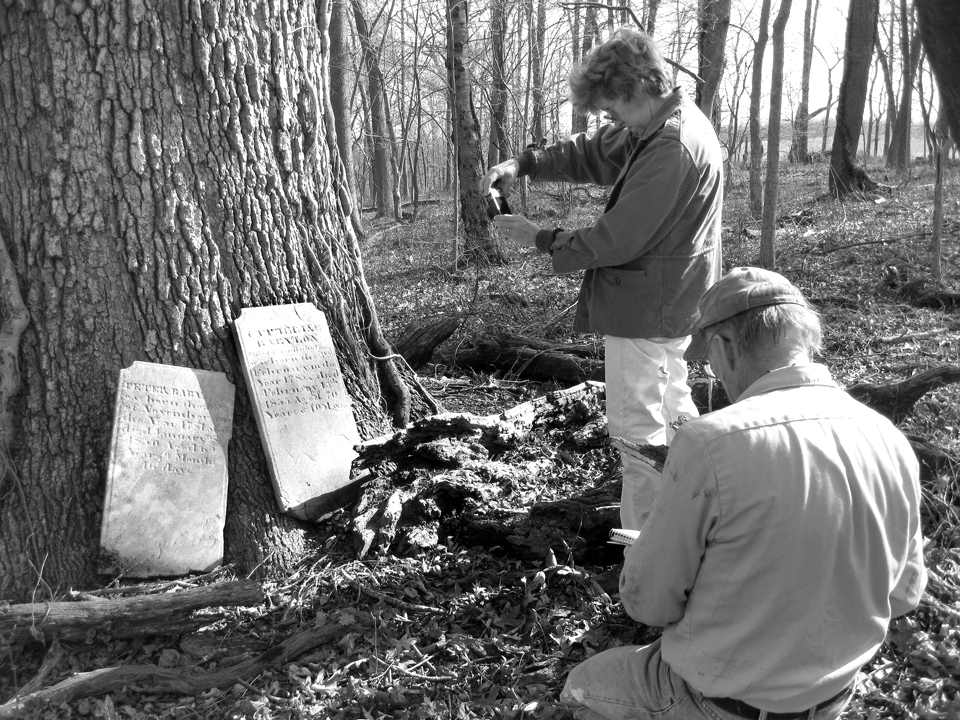 Photo caption: Two members of the Carroll County Genealogical Society are pictured here photographing and copying gravestones at an abandoned cemetery near Uniontown that dates back nearly 250 years.