Herrs Had a Strong Reputation

Westminster’s Main Street has always been home to a wide variety of businesses as well as residences.  From 1870 until the early twentieth century, a carriage-making firm belonging to Frank K. Herr occupied a building between Carroll and John streets where it manufactured and repaired coaches, carriages, buggies, wagons, phaetons, and other vehicles.

In 1863, seventeen-year-old Frank began an apprenticeship with blacksmith Michael Baughman who had a shop at the east end of town.  After his apprenticeship ended in the spring of 1866, Herr found employment at a carriage and wagon shop on West Main Street, work which was lighter, more interesting, and didn’t involve shoeing horses.  He must have been very successful because within three years he was able to purchase the shop.

Herr had several partners during the early 1870s and then became the sole proprietor until 1880 when he offered his older brother, Samuel, an interest in the firm.  Ill health, a result of Civil War service, had left Samuel incapable of physical labor, but he apparently could assist with other aspects of the business.  Their firm, known as Herr Bros. or F. K. Herr & Bro., earned a reputation throughout the region for manufacturing quality carriages from 1880 until 1901.  Owning a Herr-made vehicle became a mark of distinction.

In April 1883, a massive fire swept through the entire block of homes and businesses on the north side of West Main Street from Carroll to John streets, burning the Herr Bros. Coach Factory to the ground.  With only private wells and cisterns to supply water, Westminster’s firefighters didn’t stand much of a chance.  Undaunted by the loss, the brothers started over immediately.

Ten years later, the company received a prestigious order from Johns Hopkins Hospital to construct a horse-drawn ambulance.  Samuel designed a vehicle which was thought to be the most complete of its kind in the country.  Inside there was room for a cot and seating for a doctor and attendant, plus storage space for medicine.  Everything was upholstered in leather.  Windows allowed light to enter and platform springs made the patient’s ride as smooth as possible.  The American Sentinel of September 9, 1893, said, “There is a belt of basket work in carmine, around the body.  Above the belt the body is painted black and below olive green.  The whole vehicle is 11 feet long and has beautiful lamps.”  It must have made a memorable sight traveling the streets of Baltimore.

Within a few more years, the brothers received another important contract, this time from the U. S. Post Office to build delivery vehicles for Carroll’s rural postal service.  Wagon I was described as “a two-horse conveyance, 12 feet long, painted blue with black trimming, and the running gear yellow with red stripes…The inside was fitted up with counters, drawers and letter boxes.”

Samuel sold his share of the business to George W. Babylon in 1901 and the firm became Herr & Babylon.  When automobiles began replacing carriages, the savvy partners opened a Ford dealership.

On his death in 1921, Frank Herr left behind a reputation for business excellence. 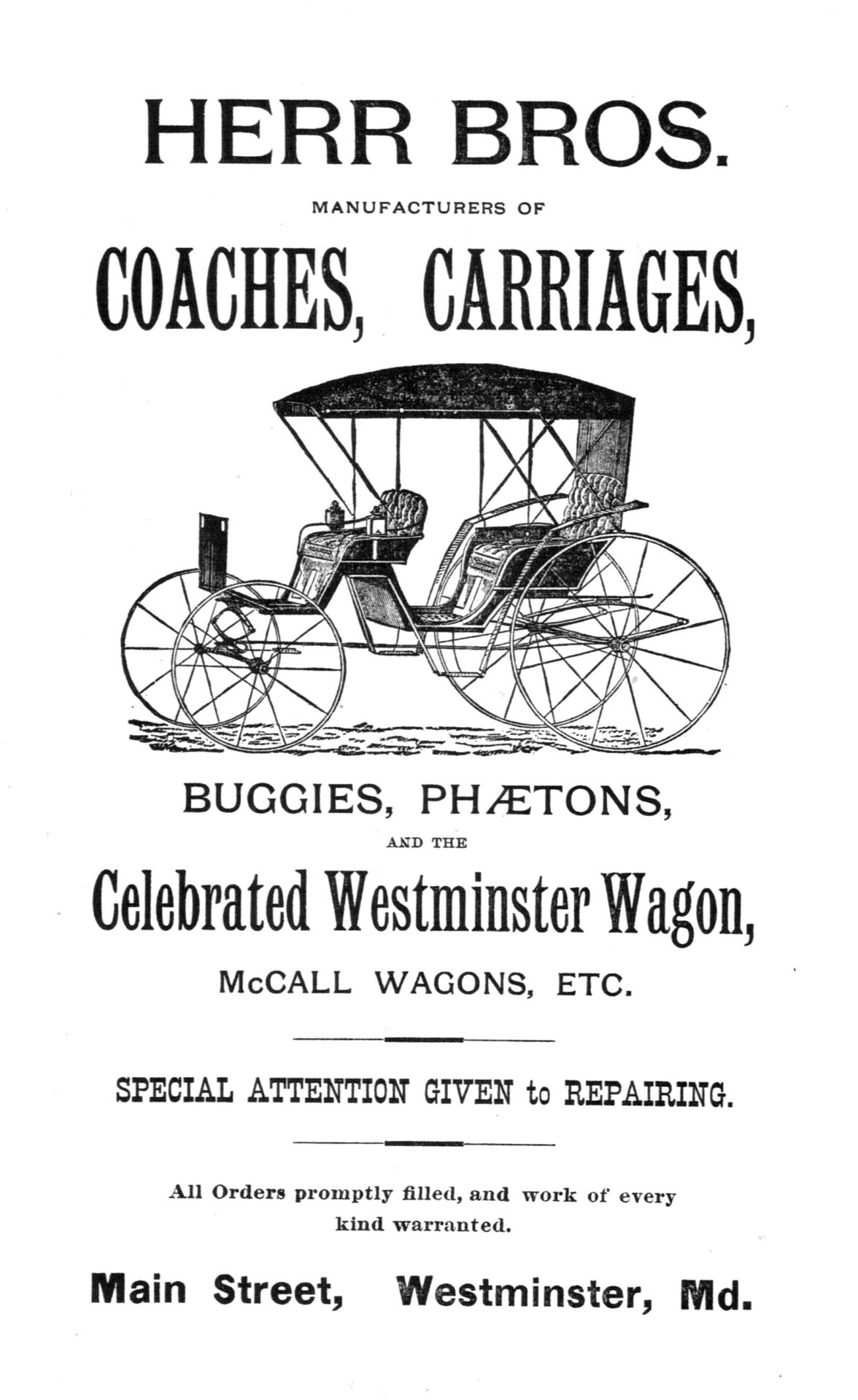 Photo caption: This graphically elegant advertisement by the Herr Brothers for their Westminster coach shop appeared in an 1883 publication of the Western Maryland Railroad.