Sam’s Creek begins its journey to the sea on the western slope of Parr’s Ridge just above Taylorsville and flows roughly west-northwest until it joins Little Pipe Creek outside of Union Bridge.  From there, its water flows into the Monocacy, then the Potomac, the Chesapeake, and ultimately the Atlantic.  The creek is clear and sparkling as it gathers momentum plunging from the height of the ridge.  Sam’s Creek Road, sometimes dirt and sometimes paved, parallels it for much of its length.

Early settlers of the area recognized the water could power grist and sawmills, and maps from the 1800s show lots of mills and mill ponds along the creek.  Local lore says an Indian named Sam lived near the little village of Sam’s Creek which straddles the Carroll-Frederick border and was allowed to fish in the stream.  That must have been well over 200 years ago, because Native Americans disappeared from central Maryland at a very early period as white settlements spread west from the Chesapeake region.  However, an occasional individual may have lingered here and left his name for posterity in the place he called home.

If you drive south from Marston, which has also been called Mt. Vernon and Jewsburg over its long existence, you’ll reach Sam’s Creek Road.  Turn right and you’re on the outskirts of what remains of the village of Sam’s Creek, once thriving enough to have warranted a post office and supported a general store, several blacksmith shops, and the surrounding mills.  David E. Stem owned and ran the town’s dry goods and grocery store for most of his life.  He was still at it in 1920 at the age of 84.

Local history buff Donald Sipes visited the Historical Society’s library recently and shared the advertisement which accompanies this article.  It intrigued me for several reasons.  First was its reference to D. E. Stem and the village of Sam’s Creek.  It wasn’t difficult to trace Stem and his family through the census records and see his involvement as a retail merchant.  At one point, he called himself both a merchant and a farmer – not surprising in a rural area.  Perhaps he raised some of the groceries he sold.

The second aspect of the ad was its use of sex to sell cigars at a rather early time period.  I’ll admit I’m not really familiar with the kinds of ads which might have appeared at the beginning of the twentieth century, but this seemed pretty risqué for a conservative part of central Maryland.  It reminded me more of the pinups you saw in car repair shops of the 1940s and 1950s.  I spent a good bit of time reading through the Union Bridge Pilot newspaper between 1910 and 1920 and never ran across an ad as blatantly sexy as this one.

About half a mile to the east of Stem’s store stood Bethel Methodist Episcopal Church, likely a bulwark of resistance to the evils of smoking and drinking at that time.  I wonder what Stem’s neighbors thought of the ad and how well this beauty sold cigars. 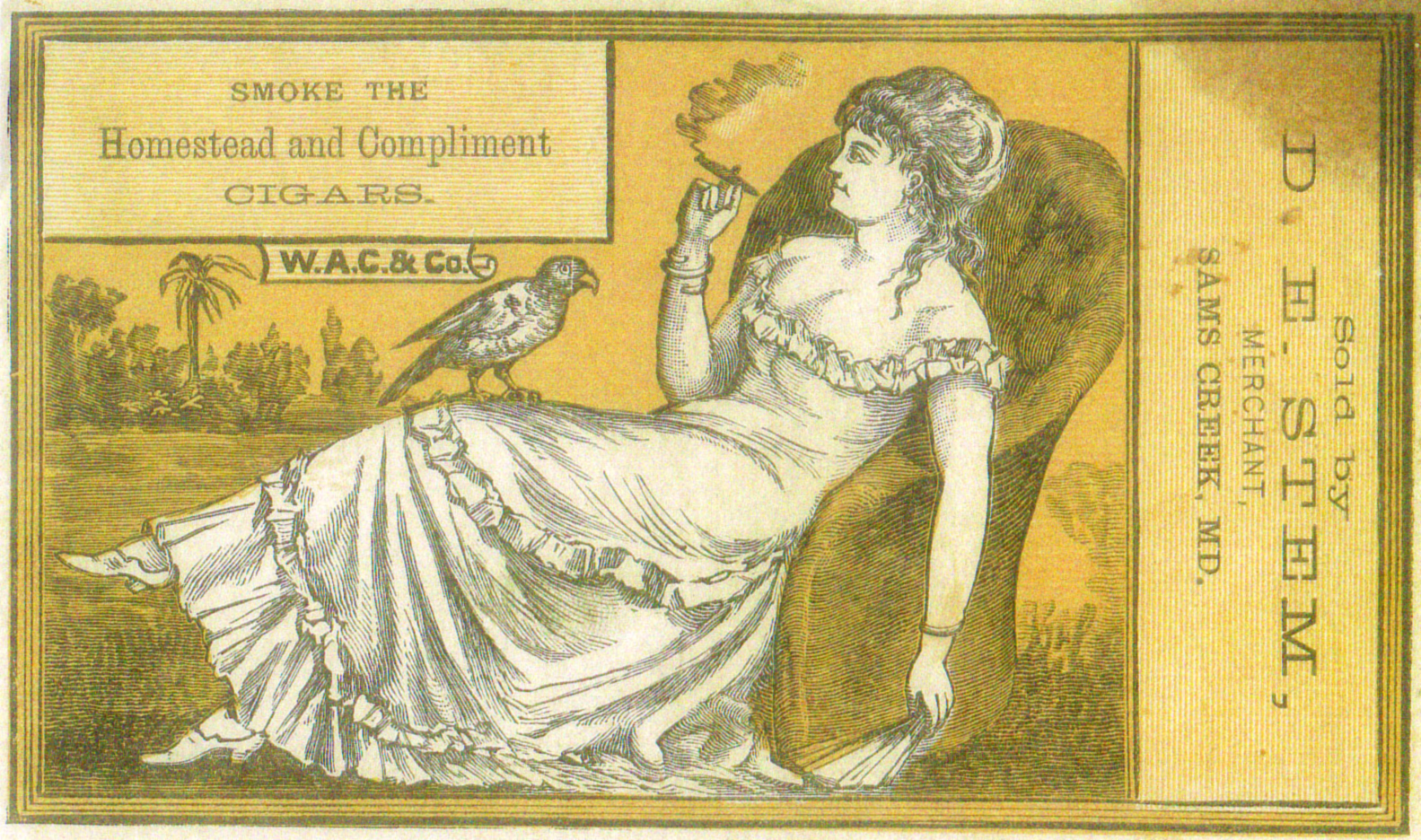 Photo caption: This advertisement probably dates to the late 1890s or early 1900s.  David E. Stem ran a general store in the village of Sam’s Creek at that time and must have sold this brand of cigars.