Establishing the Davis Library in Westminster

Started in 1863, by the beginning of 1949, the Westminster Library was contained in one room on the second floor of the Times Building, but things were about to change.

On January 7, 1949, Mr. and Mrs. Walter H. Davis announced that they would give a public library building to Westminster and provide an endowment for its support. Mr. Davis was a member of the Board of Trustees of the Westminster Methodist Church. When the two Methodist churches in town merged, leaving an empty building, Mr. Davis determined to buy and renovate the building for the library. His intent was to establish a free library. Therefore, on January 27, 1949, a special meeting of the Westminster Library Association was called by President George Mather for the purpose of liquidating all assets, discharging all officers of the Library Association and turning over all assets to the Davis Library, Inc. At that time, the subscription fee for library service was dropped, making it free for all citizens.

Mr. Davis immediately named a new self-perpetuating Board that included longstanding library advocate George Mather. The new board supervised the extensive renovation of the former Methodist Protestant Church building on Main Street. Mr. Davis provided a cash donation of $40,000 for the renovations.

To provide operating funds for the library, Mr. Davis gave the Davis Library, Inc. the building he owned at the corner of John and Main Streets. At that time, the net income was approximately $12,000 per year. The occupants of the Davis Building were men’s clothing manufacturer L. Grief and Bros., Bixler and Guild Drug store, State Theatre, and four apartments.

Who was this generous philanthropist? Mr. Davis was born in Middletown, MD, in 1873. At the age of 12 he was forced to quit school and get a job. He worked for the next few years in dry goods retail and wholesale in Frederick. He then obtained an apprenticeship with Ramsburg Carriage Works. In 1889, he moved to Westminster and worked as a journeyman trimmer for Herr Bros., carriage makers. In 1898, he purchased a grocery business on West Main Street. Then in 1910, Mr. Davis became one of the first car dealers in the nation.  He started selling Stevens-Duryea, followed by the E-M-F and, in 1920, Buick.

Mr. Davis served as Westminster city councilman for several years and briefly served as mayor. He was a member of many service organizations including the Westminster Rotary. He served on the Board of Trustees of Western Maryland College and was honored by the Westminster Chamber of Commerce as Citizen of the Year.

The Maryland Library Association presented Mr. Davis with life membership in 1949. The dedication of the Davis Library was held on May 25, 1951. It was open 35 hours per week, staffed by two employees, housed 9,000 books, and had a circulation of 19,500 in its first year.

Mr. Davis died three weeks before the dedication. At the dedication, Lowell Ensor, then president of Western Maryland College noted, “the constant use of the Davis Library will demonstrate for decades to come a grateful community’s living appreciation to a great man and to his gracious wife.” 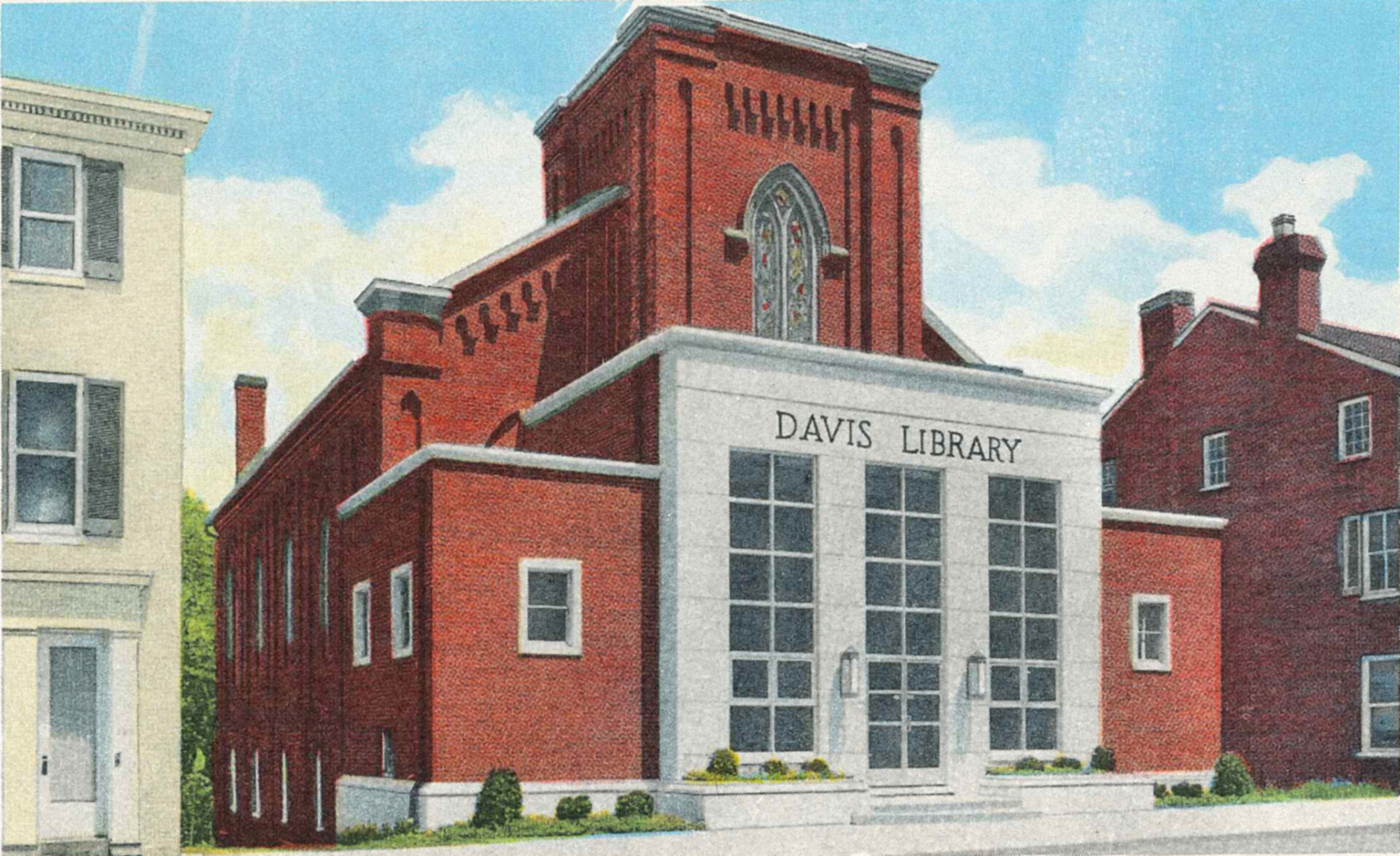 Image caption: This artist’s rendering shows the Davis Library which was established in the former Methodist Protestant Church on East Main Street, Westminster. It was a gift to the community from Mr. and Mrs. Walter H. Davis