By the time Europeans began building homes in Carroll County, most if not all Native Americans had migrated out of the area, but they left behind plenty of evidence they had been here – in permanent settlements, during seasonal visits, or while pausing on a journey.

Thanks to retired Maryland archaeologist Stephen Israel, the Historical Society received a list of articles dealing with local archaeology.  Some articles describe collections of Native American stone tools and other objects found throughout the county.  You won’t learn where to go hunting, but you will learn what others have discovered.

In 1926, a Westminster paper reported, “John H. Martin, this city, while helping to shock wheat on the Irvin L. Hunter farm, Sullivan road, Monday afternoon, saw a peculiar stone and was attracted by the groove in the stone.  On picking it up he at once recognized it as an Indian tomahawk and in a very good state of preservation.  This is only the second one found in this vicinity in recent years…”  Technically speaking, this should have been called a “stone axe,” and the likelihood it ever saw use in warfare is small, but the fact it was found in a cultivated field in the twentieth century makes you wonder how many similar objects were around when our forebears arrived!

A Union Bridge paper in 1941 featured the picture of a large grinding stone sitting in someone’s lawn.  It would have been used for pulverizing corn, nuts, and beans.  Perhaps the Native Americans who originally owned it also had a cooking pot made of soapstone.  Near Marriottsville, at the eastern edge of Carroll County, there was plenty of the soft rock called soapstone which could easily be shaped into water-holding vessels with a few stone or antler tools.

The most frequently found objects, however, are projectile points – what most of us call arrowheads or spear points.  Probably hundreds of them have been discovered around the county over the years and they reside in private collections as well as local museums.  In fact, it is likely that someone has donated Native American stone objects to every museum between Manchester and Mount Airy.

Metarhyolite, a very fine-grained volcanic rock occurring in parts of Frederick County and nearby Adams Co., PA, was the favorite local material for fashioning projectile points as well as scraping and cutting tools.  It’s a pretty shade of lavender-gray and it made such superior tools that it was widely traded among Native Americans in the mid-Atlantic region who traveled great distances just to collect it.

Recently, amateur and professional archaeologists have been excavating a Native American site at Pine Valley Park in the Manchester area.  They have found “stone spear points, knives, scrapers, shaft strengtheners and drills and other stone tools from the Hunters and Gatherers Prehistoric Period.”  Mr. Israel notes that bands of hunters and gatherers camped at sites such as the one at Pine Valley during the Late Archaic Period – 5,000 to 3,000 years before the present.

Keep your eyes open.  There may still be plenty of similar objects around if you look carefully. 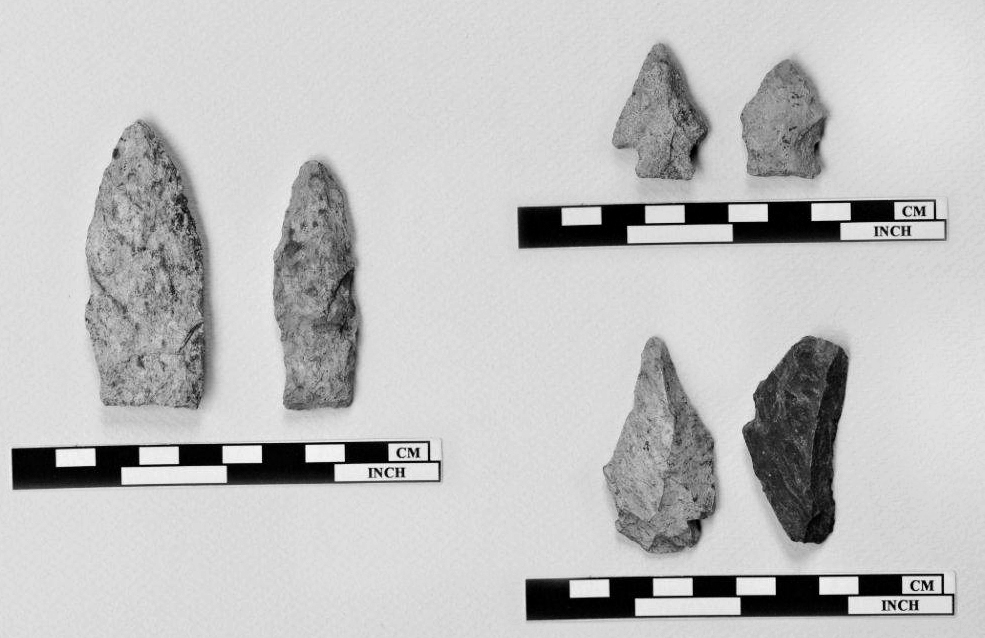 Photo caption: Sample of stone tools found in northeastern Carroll County at a Native American site dating from 5,000 to 3,000 years before the present.  The tools are made of metarhyolite and include small projectile points, larger points or knives, an “engraver” with a pointed tip, and a scraping tool.