Although the name “Henryton” no longer means much to Carroll Countians, there is a lot of interesting history associated with it, as both a hospital and a tiny village located in the extreme southeastern corner of the county.

Henry Devries, a local landowner during the mid-nineteenth century, gave his name to a scattering of roughly eleven houses located near the B&O (now CSX) Railroad tracks. It had one store. Residents made their living farming, trapping, selling pulpwood, and working in local feldspar, flint, and soapstone quarries. This was a largely overlooked rural area along the Patapsco River.

The Historical Society owns a memoir written by an unidentified man who lived in Henryton between 1919 and 1928, a time of tremendous transition. In 1919, there were no paved roads and the most direct route to the movie theater in Sykesville was to follow the B&O tracks – four miles each way. In 1960, he recalled those walks. “What is a four mile walk on a warm, mild summer night, beneath a sky of dark blue velvet, studded with jewel-like twinkling stars? Or, a four-mile walk on a crisp, cold winter night when the ground is blanketed with a light covering of snow, and with a full moon shining so brightly that it is possible to see for a great distance.”

By 1928, the roads around Henryton were paved and other significant changes had occurred because the State of Maryland built a large tuberculosis hospital there in 1922/23 to serve its African American population. During the early part of the twentieth century, the incidence of TB among Maryland’s blacks was nearly four times higher than among whites. In that period of “separate but equal” treatment of the races, even hospitals were segregated. The institution was usually known as the Henryton Tuberculosis Sanatorium.

The writer reminisced about the changes the hospital brought. “The immediate area around Henryton, where once the night silence was broken only by the cheerful chirping of crickets, and the guttural calls of ancient bull-frogs, is now broken by the hissing of steam, and clanking machinery in the boiler house at the railroad crossing. Here, after nightfall, the only light to be seen was the feeble rays cast by kerosene lamps through the windows of the three houses that stood here [along the tracks]. Now…all that has changed. The soft, velvety blackness of night is pierced by myriad electric light bulbs from the boiler house at the crossing, and the brightly lighted hospital on the hill above the railroad.”

The hospital complex grew steadily from its original six buildings and a utility plant. By 1946, there were eighteen buildings with a capacity of 500 patients, but the incidence of TB had dropped, so many of the newer buildings were never fully utilized. It closed its doors about 1960, and re-opened in 1962/63 as a center to treat severely and profoundly retarded ambulatory adults.  That closed in 1985, and the buildings were never used again. Time and vandalism took their tolls, and by 2011 the complex was in a “deplorable state.” It is now demolished. 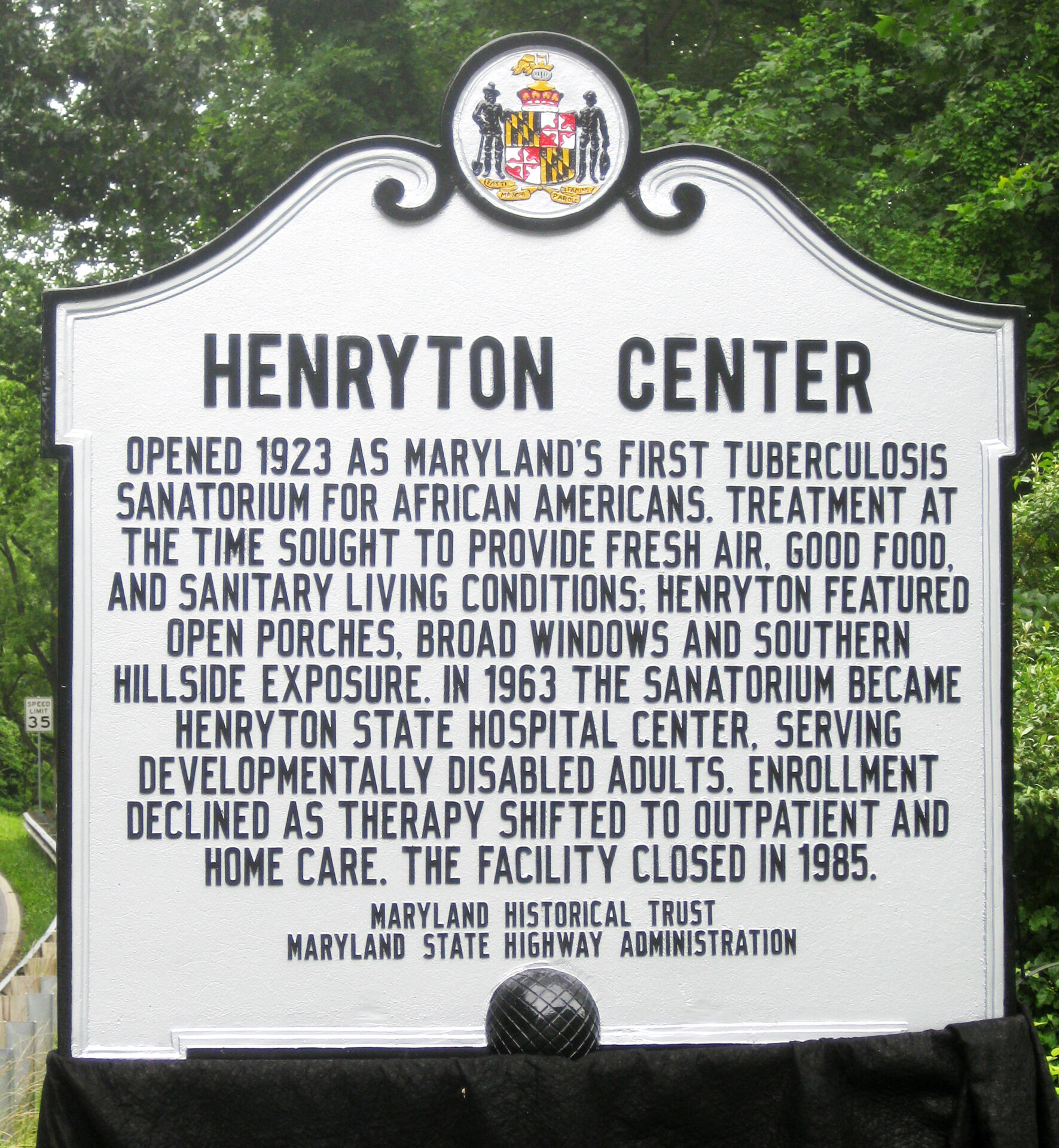 Photo caption: A Maryland Historical Trust marker along Henryton Road at the former entrance to the Henryton State Hospital Center/Henryton Tuberculosis Sanatorium is all that remains of an 18-building complex originally constructed for African American tuberculosis patients in the 1920s.