A Look Back at Roller Rinks and Drive-ins

Oh, the memories! When I decided to write this week’s column about Carroll’s drive-in movie theaters and roller rinks, my teenage years came rushing back. Perhaps yours will too as you read further.

Drive-in theaters were a bargain for everyone. You could pack a car full of people, hook up the sound system, and watch a movie for a lot less money than if you bought tickets to an indoor movie. Parents could save on babysitting by letting their children sleep in the car while they watched a movie, or teenagers could pool their money for one car’s admission.

There were three drive-in theaters serving Carroll if you count the Monocacy that operated just across the Frederick County border on the Taneytown-Emmitsburg Road. That appears to be the earliest one to open as ads for it appear in 1953, and it was the last to close – about 1984.

Westminster’s Ridge Drive-In opened in 1954 at the intersection of Washington and Hook roads, roughly a mile from town. Its ads proclaimed that admission for a “car or carful at all times” was just $1.25. That seems a bargain, even for sixty-one years ago, unless you were hungry and spent a lot of money at the snack bar which every drive-in boasted. Unfortunately, the Ridge’s location proved its undoing when Westminster built a new high school right next door in 1971 and installed powerful lights for night games on the football field. By 1973, the theatre was gone and the land rezoned.

Residents of the South Carroll area could enjoy outdoor movies at the Lake Drive-In on Route 32 about a mile north of Eldersburg. Like the Ridge, its heyday was the ‘50s through the ‘70s. In 1979, an article in the Carroll County Times announced it was likely to close, but the 8-acre site probably brought a hefty price given the rising value of South Carroll real estate. For most people growing up in the mid-20th century, drive-in movies hold lots of memories – not as much for the movies you watched, as the social life that went with them.

Roller skating and skating rinks belong to that era as well. Almost every kind of youth group from those associated with churches to Scouts, schools, and 4-H clubs booked skating parties at Carroll’s three rinks. The prices were reasonable. Skating offered exercise, lively music, and, no matter what your skill, there was usually someone who fell down more often than you did.  Watching top-notch skaters in fancy outfits weaving in and out among us struggling novices was also part of the experience.

Ads for the Rainbow Roller Rink on the outskirts of Taneytown show up as early as 1941. As that facility transitioned into a dance hall and its reputation declined, an attractive roller rink south of Hampstead called Sportsman’s Hall gained popularity. Sportman’s even managed to reopen after a disastrous 1992 fire forced it to close. Eldersburg’s Liberty Roller Center on Liberty Road opened in 1981, but didn’t survive very long. 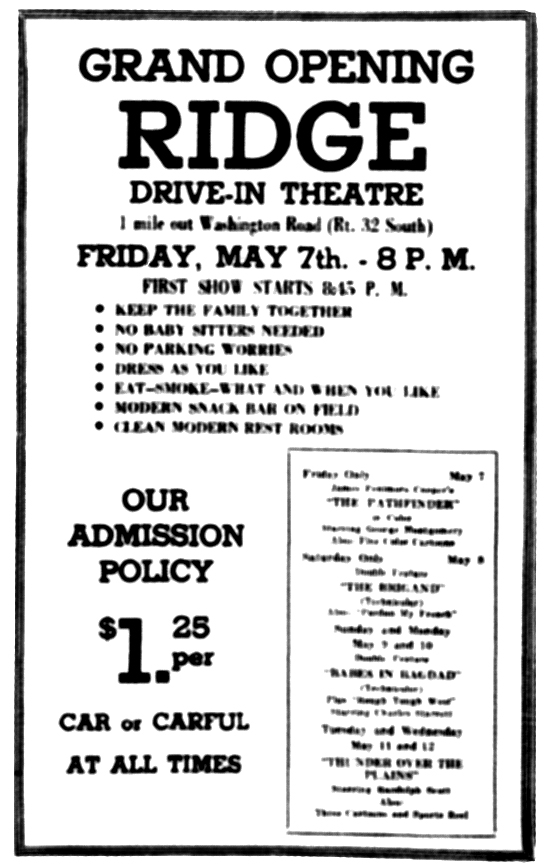 Photo caption: This ad for the grand opening of Westminster’s Ridge Drive-in Theatre appeared in the [Carroll County] Times on May 6, 1954, and signaled a new source of entertainment for Carroll’s growing population.