Memories from Students at Carroll’s 1- and 2-room Schoolhouses

Nearly every man and woman Joan Prall interviewed in the 1980s for “Schoolbells and Slates,” her history of Carroll’s one and two-room schools, fondly remembered their experiences as students or teachers. Most studied or taught from the beginning of the twentieth century through the 1920s, usually before the slow transition to consolidated schools began about 1917.

Some teachers enjoyed their jobs so much they reported staying in the local school system for 40+ years, although many women left to get married because the school board didn’t want married women teaching. The pay for either sex wasn’t particularly good but probably could be supplemented. If you served as both teacher and principal, you received an additional $100 per year.

The curriculum was basic – arithmetic, reading, spelling, penmanship, geography, history, and, for older students, some physiology. Students remembered classes in patriotism and music appreciation as well. Lucky the school with a piano and a teacher who could play it. Alberta Parsons Lanier, one of those who taught in Carroll County for 40 years, had a small organ while at Black’s School near the Pennsylvania border. One teacher was popular for the pleasure his wildflower walk brought every spring. After collecting flowers, the children returned to school where they learned the names and spellings. Wasn’t escape from the classroom on a nice day really the best part of this exercise, or were these students a group of budding botanists?

Harsh discipline was rarely mentioned. Standing in a corner for several hours, staying in from recess (maybe for days), or writing something like “I will not throw banana peels on the playground” several hundred times seem to have been standard punishments for many offenses. Yes, everyone knew there was a switch near the teacher’s desk, but it apparently was rarely used, at least those interviewed didn’t recall much corporal punishment seventy years later. A beating at school usually meant another one at home, perhaps significantly harder.

Students vividly recalled what they did at recess, an activity which undoubtedly worked off excess energy in children used to plenty of exercise in their daily lives.  Dodge ball was very popular; so were “caddy,” “fox and hounds,” “drop the handkerchief,” jump rope and, of course, baseball. Marbles could be played inside or out. Many schoolyards were worn to bare dirt, but there might be woods nearby for hide and seek. On snowy days, children at Black’s School brought sleds. With or without a teacher’s permission, there must have been snowball battles as well.

By the 1920s, many schools in the northern part of the county participated in a May field day at the Taneytown fairground. That involved fierce interschool competition and a chance to win medals so it paid to figure out in advance who were your school’s best dodge ball players, fastest runners, or most talented baseball pitchers and hitters.

How fortunate it was that Mrs. Prall recorded so many memories while those who spent their early days in one-room schools were around to share them. These three columns have barely scratched the surface of what she gleaned from interviews. 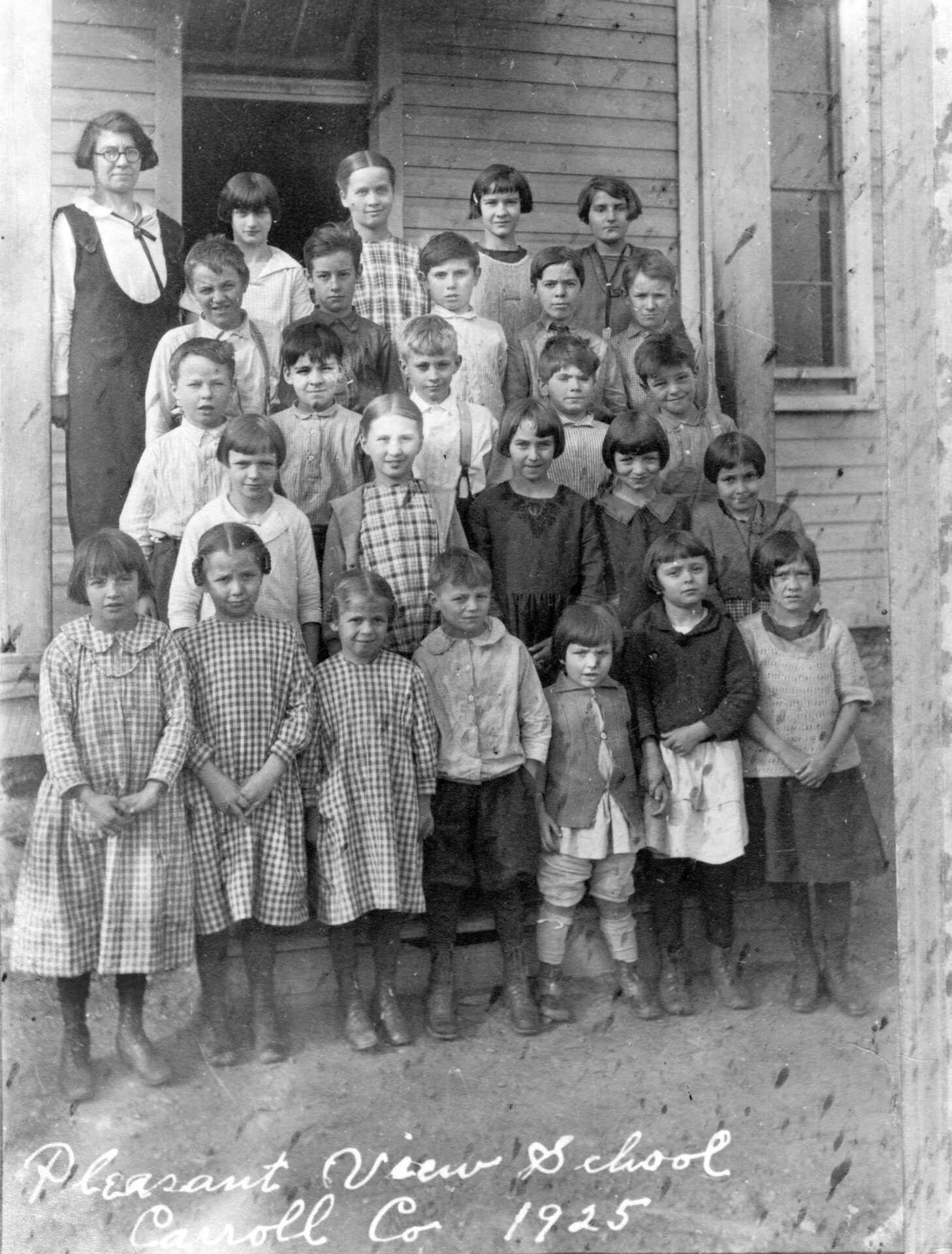 Photo caption:  A teacher and her students stand outside Pleasant View, a one-room school located several miles south of Taylorsville, in 1925.