The August 9th column promised more about local one and two-room schools which came to light during historian Joan Prall’s interviews with former students and teachers in the late 1980s.  Let’s take a look at what some people shared.

It wasn’t unusual for children to walk two miles to and from school, although when the weather got really bad in the winter, schools might be closed. Just how anyone got the word out about closings before radios were prevalent is unknown. Maybe people simply used common sense. One teacher reported struggling through snow only to find no students showed up.

During planting and harvesting seasons, every farming family needed “all hands on deck,” so teachers knew school attendance might be cut in half or even more. The school at Mexico, located between Westminster and Manchester, sometimes offered a night class for those who had to work during the day. Raymond Young, who attended Morelock School, remembered that boys as old as 20 would attend his school when they weren’t needed on the nearby farms that raised vegetables for the Shriver cannery.

What did these little schools offer for amenities besides desks and blackboards? There was no indoor plumbing, so a boy or two was appointed to haul drinking water from a nearby source which might be a quarter mile away. All schools had privies. Windows supplied the light, and potbelly stoves supplied the heat. Peg Stafford Kroh said the hardest part of her first year of teaching at Stonesifer School on Old Bachman’s Valley Road was learning to light the stove. After school she might walk the mile home, only to forget whether she’d properly shut it down.

Several teachers reported using their stoves to make soup on winter days. The students brought vegetables, the teacher supplied a bit of meat, and everyone had a warm meal.  Otherwise, children brought lunch in a pail – sandwiches plus perhaps an apple and piece of pie.

Challenges to teachers existed at every turn. If it wasn’t lighting a stove, it was usually the students themselves. Josephine Chaney started teaching in 1925 at Springville School in northeastern Carroll County fresh out of Frostburg Normal School. When the year began she shared 40 students with another teacher, but after six months she was left with all of them in grades one through seven. When they didn’t want her to know what they were saying, they spoke in Pennsylvania “Dutch.”

Another teacher told Joan Prall about a student who constantly came to school stinking of skunk.  He liked shooting them. While the teacher was tempted to report him to the school supervisor and have him expelled, she knew he desperately needed an education so decided everyone would put up with him.

Esther Walsh Schultz was a student at Shiloh School near Hampstead before becoming a teacher there in 1920 at age 17 after only seven years of education herself. Her father agreed to let her work if she could board at home. With a provisional teaching certificate, her salary was $50 a month. 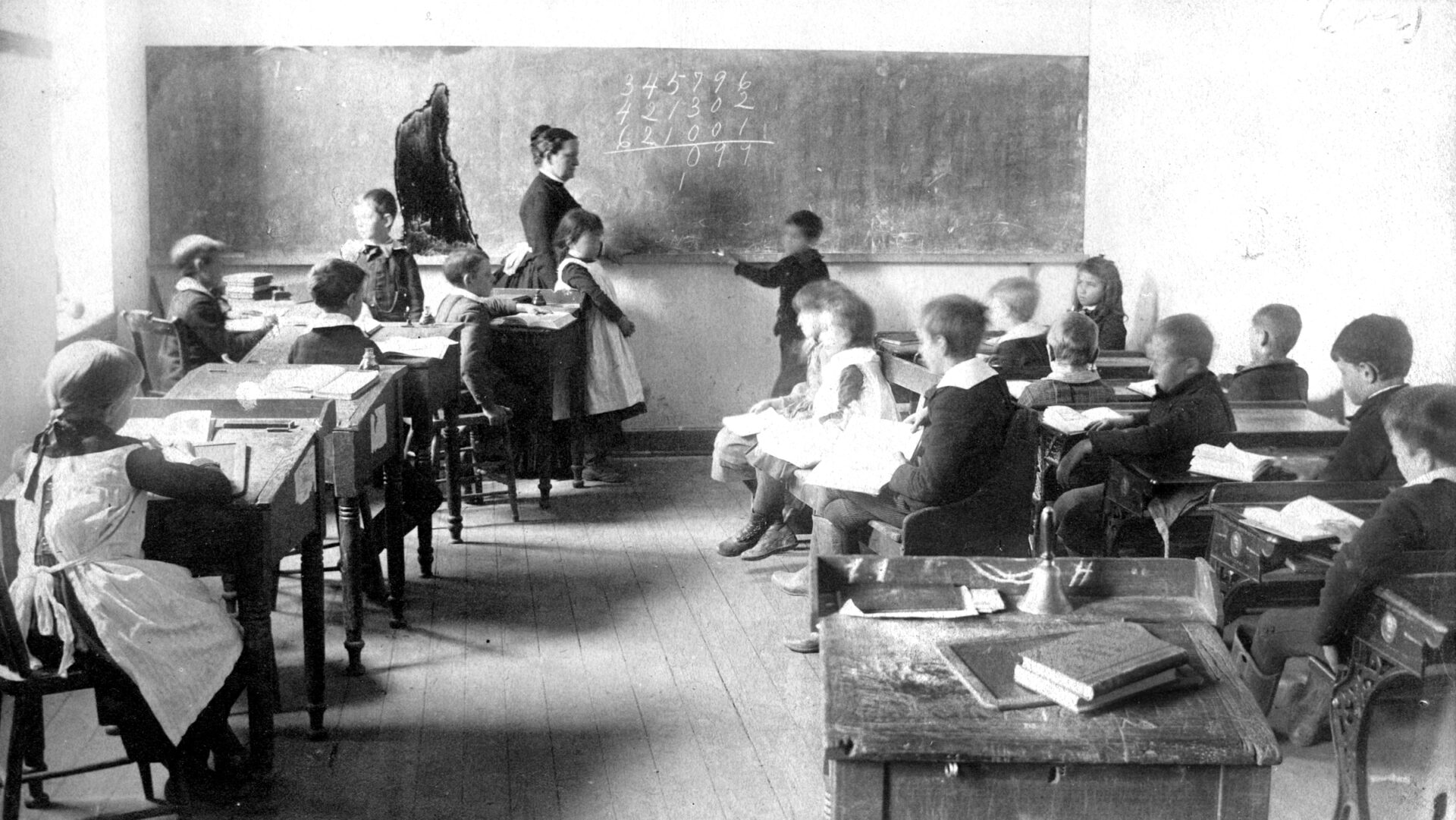 Photo caption: This photo, probably taken in the late 1880s, shows the interior of a primary school run by Western Maryland College (now McDaniel College) as part of its preparatory program. Although each student here had his own desk, in many one-room schools scattered throughout the countryside, two students would be asked to share a desk.