For over 50 years, this little restaurant at 9 East Main Street, was owned and managed by Greek families in Westminster. Its history (1917 to 1969) tells a rich story of immigrants taking entrepreneurial risks in a new country.

The story begins in 1917, when brothers Pete and Zack Samios partnered with Tom Amprazes to open a pool hall at 9 East Main, which they soon converted to a restaurant. In 1924, the Samios family (now joined by their youngest brother, Tass) sold their interest to Amprazes and began a new venture, the People’s Store at 75 East Main.

Amprazes then ran the American with family and friends—Harry Amprazis, John Chackness, Bill and Arthur Lefteris, Steve Holevas. As friends arrived from Greece, they quickly found work in the American Restaurant. Then in 1929, Tom Amprazes sold to Ernest Kranias of Gettysburg and George Floros of Brooklyn. During the Great Depression of the 1930s, this unusual ad ran in the March 14, 1930, edition of the Times.

.. .announces to its patrons of Carroll County, also to the Holy Christian Churches and, the Honorable fathers, to have a look at us four children, American born, also our parents, as they voted for many years in this country. We bought the American Restaurant 3 months ago and gave every cent. We had to work hard to make a living honestly and honorably. We will please all the county and people of Westminster to have a look at our place, how we work hard to make a living. Our father is working hard, also our mother to keep the place clean, good food and service, as much as we can.  But this American father with his children, he needs more patronage to help out this family. You will be well satisfied for cleanliness and service…

Somehow the restaurant survived the Depression years, and Tom Amprazes took over the reins again with partners Arthur Letras, John Chackness, and William Lefteris. By 1938, the partners moved on, and Arthur Letras became sole owner. Letras invested all his savings in renovating the restaurant. Needing financial help, Letras turned to another Greek, Lou Sharkey, who stayed involved until 1956, when he opened the town’s first 24-hour restaurant—Sharkey’s Drive-in—on the newly-built Route 140.

Another Greek friend, Peter Papandreu, joined the team, and he bought Letras’s interests in the restaurant in 1959, when Letras opened Tina’s Luncheonette at 43 East Main Street.

Guest Columnist Antigoni Lefteris Ladd is a third-generation Greek American who grew up in Westminster. 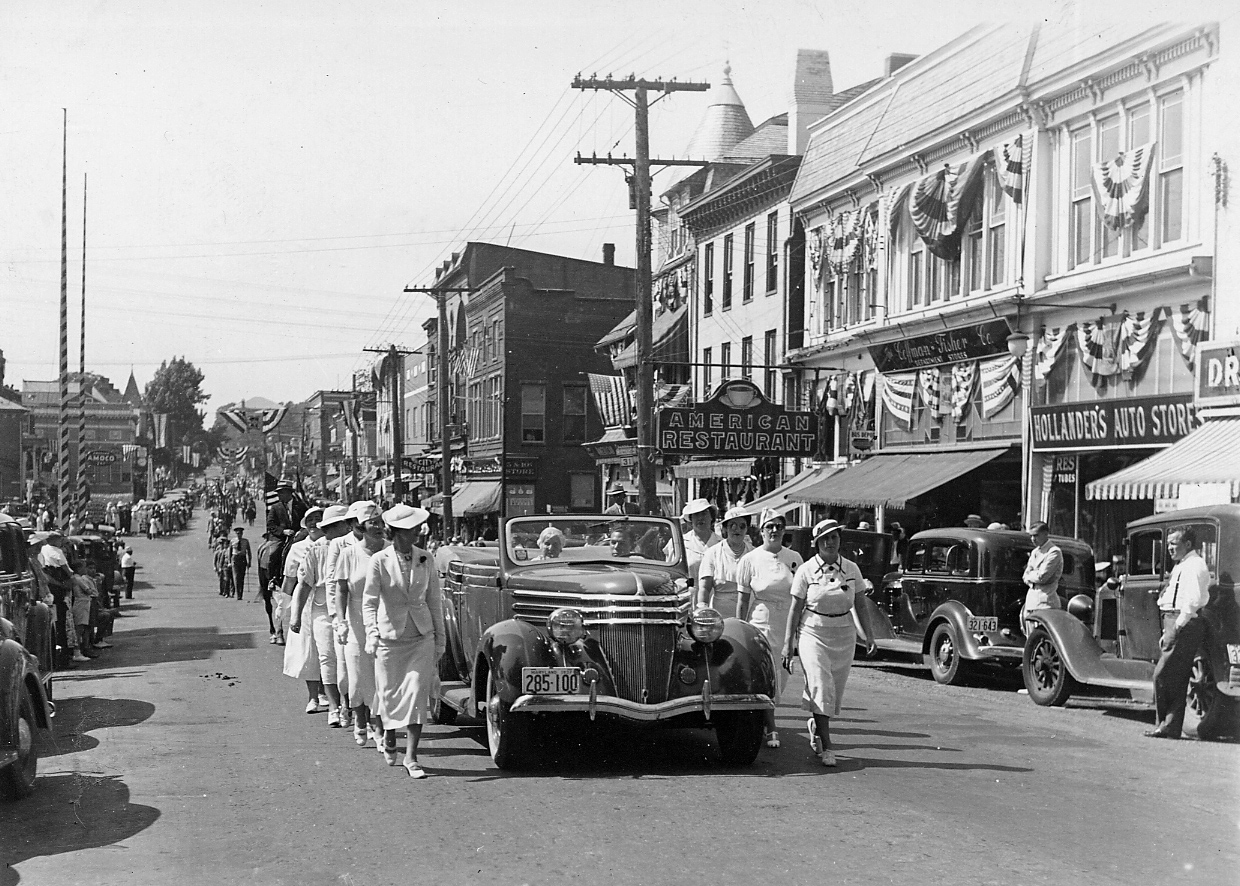 Photo caption: Notice the prominent American Restaurant sign at 9 East Main Street in this photograph taken during Carroll County’s 1937 Centennial Parade in Westminster. Many of the buildings still exist, but the signs have changed.