You may be taken aback by the cartoon which accompanies this column.  I certainly was.  It came from a 1934 issue of The Enterprise, a newspaper published in Manchester and Hampstead, Carroll County, between 1880 and 1965.

Cartoons, humorous and political, have captured the sentiments of people for a long time and date back much further than you might think.  Benjamin Franklin gets credit for using the first one in an American newspaper during the 1750s.  If you look at papers during the Civil War, you’ll see cartoons lampooning a host of people and issues from Abraham Lincoln to abolitionists and slavery.  They are very powerful because you don’t need to read to understand the message they convey.  In that respect, they are like the graphic images of Hell in medieval churches that warned the generally illiterate parishioners where they might spend Eternity.

The year this cartoon appeared in the paper was the year Hitler became “Fuhrer;” he was already the German chancellor and was acting with lightning speed to change much of German society. Clearly, people in the United States, even in small communities like Hampstead, already associated the swastika with Germany.  Still, the symbol didn’t have the chilling effect in 1934 that it did by the time World War II began.

One of the popular subjects for cartoonists in the nineteenth century was the immigrant population.  Sociologists tell us that everyone needs a scapegoat, and cartoonists could turn just about any ethnic group into images that would elicit prejudice.  As the waves of immigrants entering the United States changed, cartoonists had new groups to pick on.  One group was depicted as lazy, another composed of petty thieves, still another with lots of bellicose drinkers.  Some groups of people just “looked different.”  Unfortunately, the need for scapegoats still exists, and many of us unconsciously nod in agreement with cartoons that use stereotypes to influence our opinions.

Why do you buy newspapers or magazines?  In addition to reading the articles, do you read letters to the editor?  Do you read columns covering subjects as diverse as politics and fishing?  Do you look at the cartoons on this newspaper’s editorial page and think about the slant they put on a subject?  Some cartoons undoubtedly rub you the wrong way, but others leave you chuckling. I enjoy those that make political statements I agree with, but do it with a healthy dose of humor.  The old saying that a picture is worth 1,000 words really is true.  Maybe it is worth more than 1,000 words depending upon the picture and how much time you spend looking at it.

Those of you with computers might try typing “political cartoons” into Google. I found a free website offering lots of wonderful cartoons tackling subjects that ranged from Wall Street to sports to religion.  One of my favorites showed two young men talking on the street; one was dressed in a graduation cap and gown, the other in military garb.  The cynical caption read, “I figure it is easier to find a war than a job these days.” 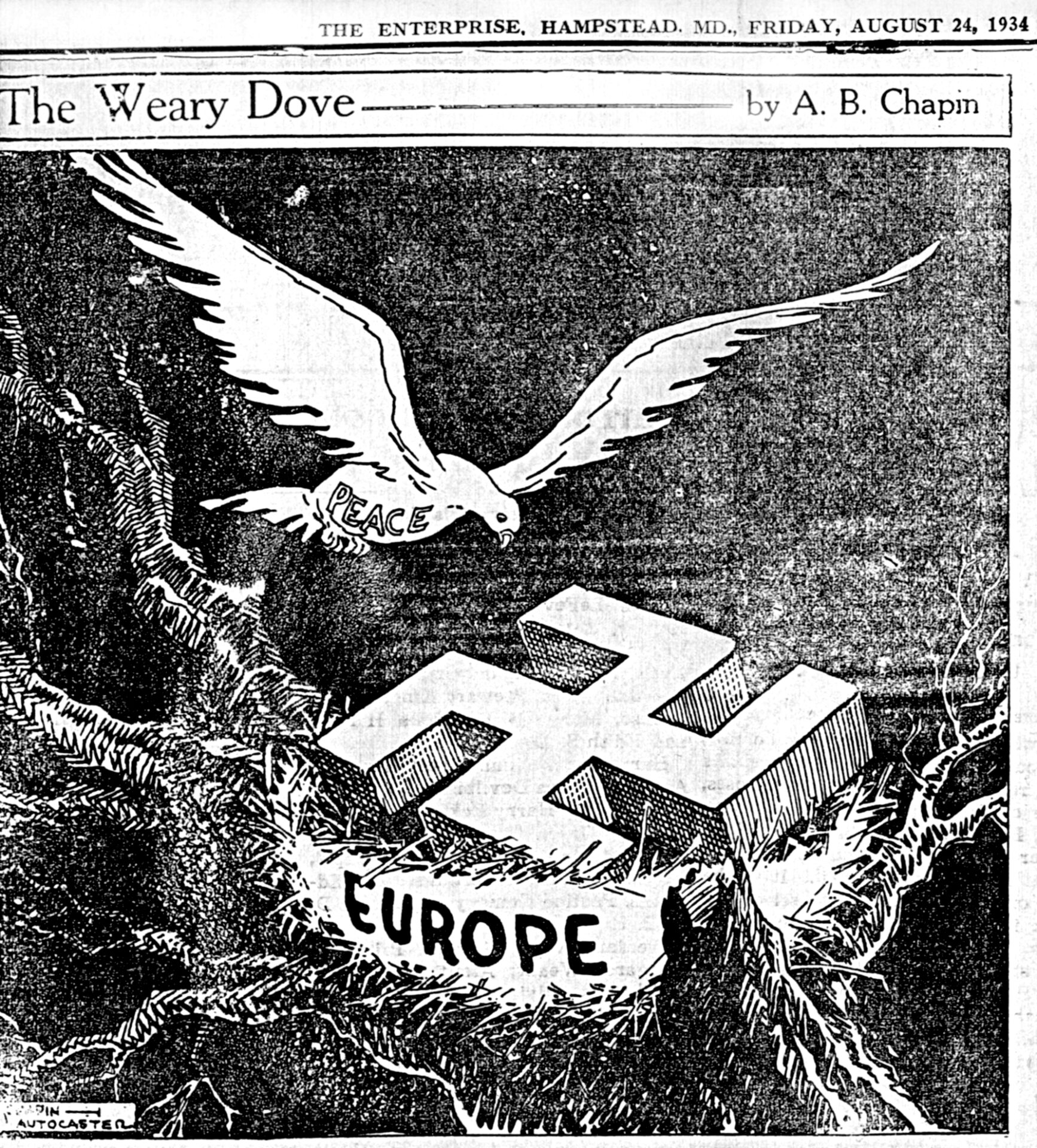 Photo caption: This startling cartoon of a dove hovering over the “nest” labeled “Europe” dominated by the Nazi swastika appeared in The Enterprise, a Hampstead newspaper, on August 24, 1934.