Few would guess that what lies beneath Main Street in Manchester is really an ancient Indian trail!  In fact, not only Main Street, but also York and Westminster Streets are part of a vast system of Indian trails left from the past and slowly but surely converted to the paved highways of today.

Manchester was strategically located at the intersection of two trails which led from Patapsco to Conewago (Baltimore to Hanover) and from the Potomac River to the Susquehanna.  Let’s give credit where credit is due because the Native Americans who created those paths followed them for a reason and we’ve chosen to keep them because they are well-established and direct.  The north-south route, called the Conewago Road in earliest times, was laid out as a public road in the 1730s by Robert Owings, a deputy surveyor of Maryland.  Rev. Harvey Schlichter’s book, Two Centuries of Grace and Growth in Manchester, suggests this was probably the first public road in present-day Carroll County and fur traders were likely the first white men to travel the route.

By the time of the last French and Indian War in the mid-eighteenth century, goods were being shipped from Baltimore to Carlisle, PA, over the Conewago Road.  The traffic also included Catholic priests who had an important mission in Conewago (Hanover) which reached out to members of the faith living in remote parts of western Maryland and western Pennsylvania.  During the Revolution, patriotic fervor in Manchester caused the town to change the name of its principal thoroughfare from “Castle Street” to “Main Street.”

It isn’t hard to envision that the Conewago Road would have become a rutty, muddy mess after the passage of heavy wagons, as well as many animals and people, for more than half a century.  By 1805 a turnpike was chartered to connect Baltimore with western Pennsylvania following the established route from Baltimore west to Reisterstown and then north to Hanover or continuing further to Westminster.  The base of the roadbed was crushed rock.  The turnpike route to Hanover became the” Hanover Pike” as it is still identified on maps.

Tollgates were positioned at various points including Reisterstown, Woodensburg, Fowblesburg and, of course, Manchester.  Conestoga wagons pulled by four, six or sometimes eight horses rumbled along the road with their bells jingling.  A former priest at St. Bartholomew’s Catholic Church in Manchester, speaking in 1940 about the old days, remarked, “You can readily imagine that a trip from Baltimore was not only a matter of a day’s travel but required heroic endurance in the blistering heat of summer and the bitter biting days of winter…The long, steady pull from Baltimore to Manchester in cold weather was so severe on the horses that cloth breast protectors were generally used to protect them from the wind.  The occupants of the wagon buried their legs and feet in straw as high as the dash-board.”  Travel might have been just a few miles an hour if the road were hilly and the load heavy.  And, of course, you had to stop to pay a toll every so often!

By the 1830s, stagecoaches offered regular service between Manchester and Baltimore.  Taverns sprang up at convenient distances to house travelers and drivers and for the exchange of horses.  Two of the earliest and most famous of these Manchester taverns were the Washington and Franklin Houses.

Manchester’s early growth was directly related to its location on the turnpike.  When nineteenth century railroads bypassed the town in favor of other routes, its importance gradually gave way to other areas of the Carroll County. 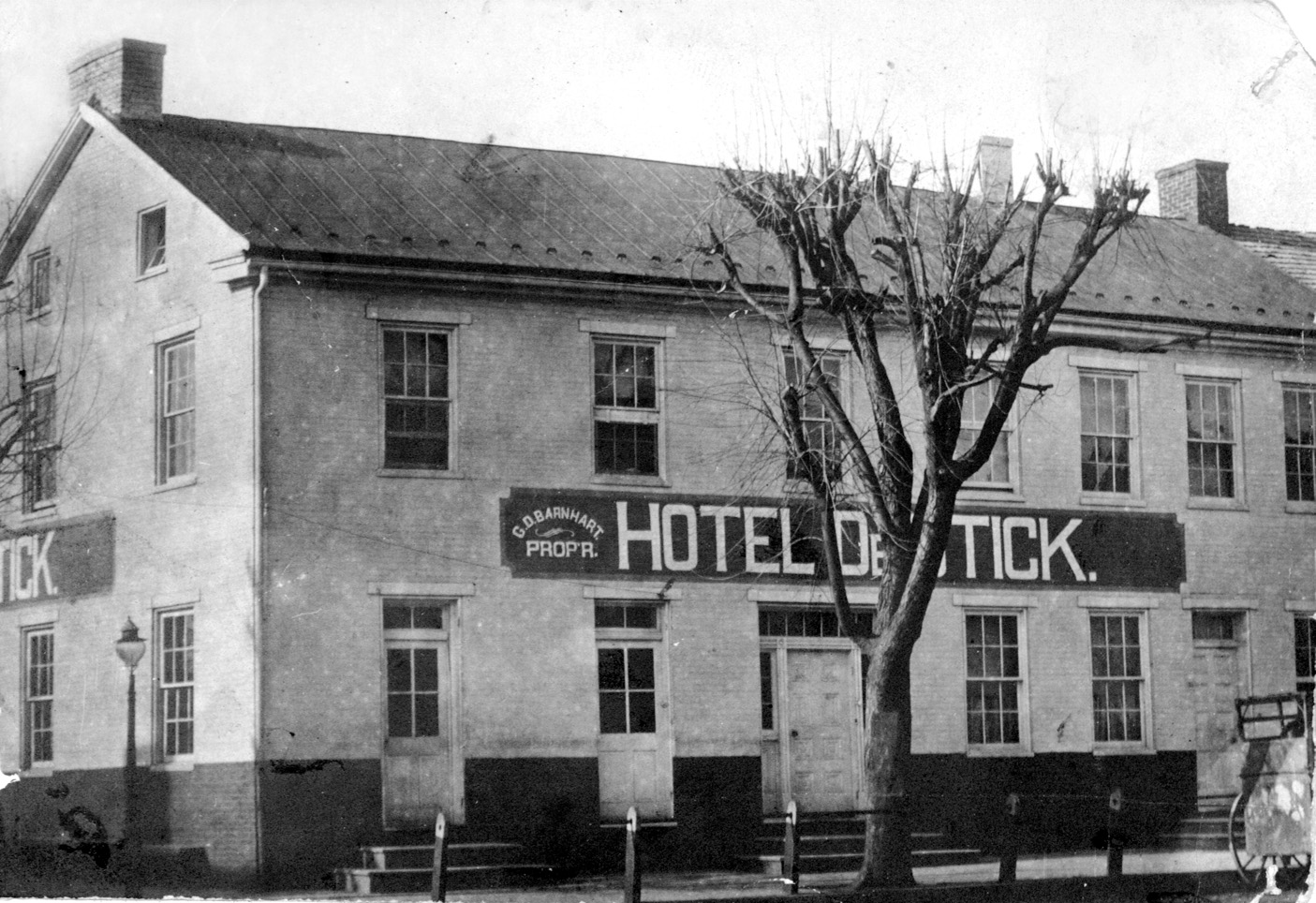 Photo caption: The Hotel DeStick, which stood at the corner of Main and Westminster Streets, was one of several hotels and taverns that flourished in Manchester over the years.  It operated from 1890 to the mid-1920s, primarily serving visitors who came from the city to escape the summer heat.