Happy Birthday, Carroll County!   You will be 173 years old on Tuesday, January 19th and we will honor you with a celebration at the Church of the Ascension’s Holy Cross Hall in Westminster at 7:00 p.m.  In addition to a party, there will be a lecture on local antique quilts.

What was Westminster like in 1837?  Thanks to William P. Maulsby’s address delivered at the fiftieth anniversary celebration in 1887, we have some good notions of that period.  “[It] was a village of about 500 inhabitants, whose chief importance was derived from the circumstance that it was situate on the turnpike road leading from Baltimore towards and to Pittsburg, at the distance of a day’s drive from Baltimore, for the large teams then doing the transportation between these and intermediate points.  It was the point at which these teams stopped nightly, in large numbers, and the monies left by them formed a considerable part of its ready money support.  It was also a stopping point of the four-horse stage coaches carrying passengers to and fro.”

At the corner of East Main and Court Streets stood the only hotel which had been around for many years, but there were also three “wagon taverns” to accommodate the tremendous traffic.  If your loaded wagon didn’t quite reach Westminster in a day, you could halt at one of many other taverns located along the turnpike at intervals of a mile or two.

The one bank occasionally paid “extra dividends of 20 per cent.”  Inhabitants could shop at three comparatively small stores but were served by the lone physician in town, Dr. William Willis.   In addition to the bank officers, a newspaper editor, the doctor and the shopkeepers, the rest of the male population was self-employed as “mechanics” – tanners, tailors, shoemakers, wheelwrights, blacksmiths, hatters, etc.   John K. Longwell, the editor, doubled as commander of the town’s military company.

You could count the number of substantial brick buildings in Westminster on two hands.  One family owned a piano and two families had “one-horse Gettysburg built carriages of which the cost price at the shop was about $120 each.”  There were approximately 60 feet of pavement in the town – 30 feet in front of a store and the rest in front of the bank.  By 1887, there was a lot more pavement and “if it is not so smooth and even as in [Baltimore’s] Mount Vernon Square, or in Eutaw Place, why be patient…”

Maulsby’s 1887 address reflected great pride in the county and county seat.  Capital and labor “went on quietly and contentedly” in their own spheres.  “Here moderate wealth, acquired by careful industry consorted cheerfully with mechanical labor, seeking livelihood and modest accumulation.  No community could be found in which moderation in all things, and equality amongst all men, prevailed as the rule of daily life, more fully than in this community.  Personal pretentiousness was unknown.  Assumption of superiority over neighbors was unheard off.  Substantiality was essentially characteristic of the people and of their homes.”

When the county celebrated its fiftieth birthday, much had changed, but happily much still remained the same. 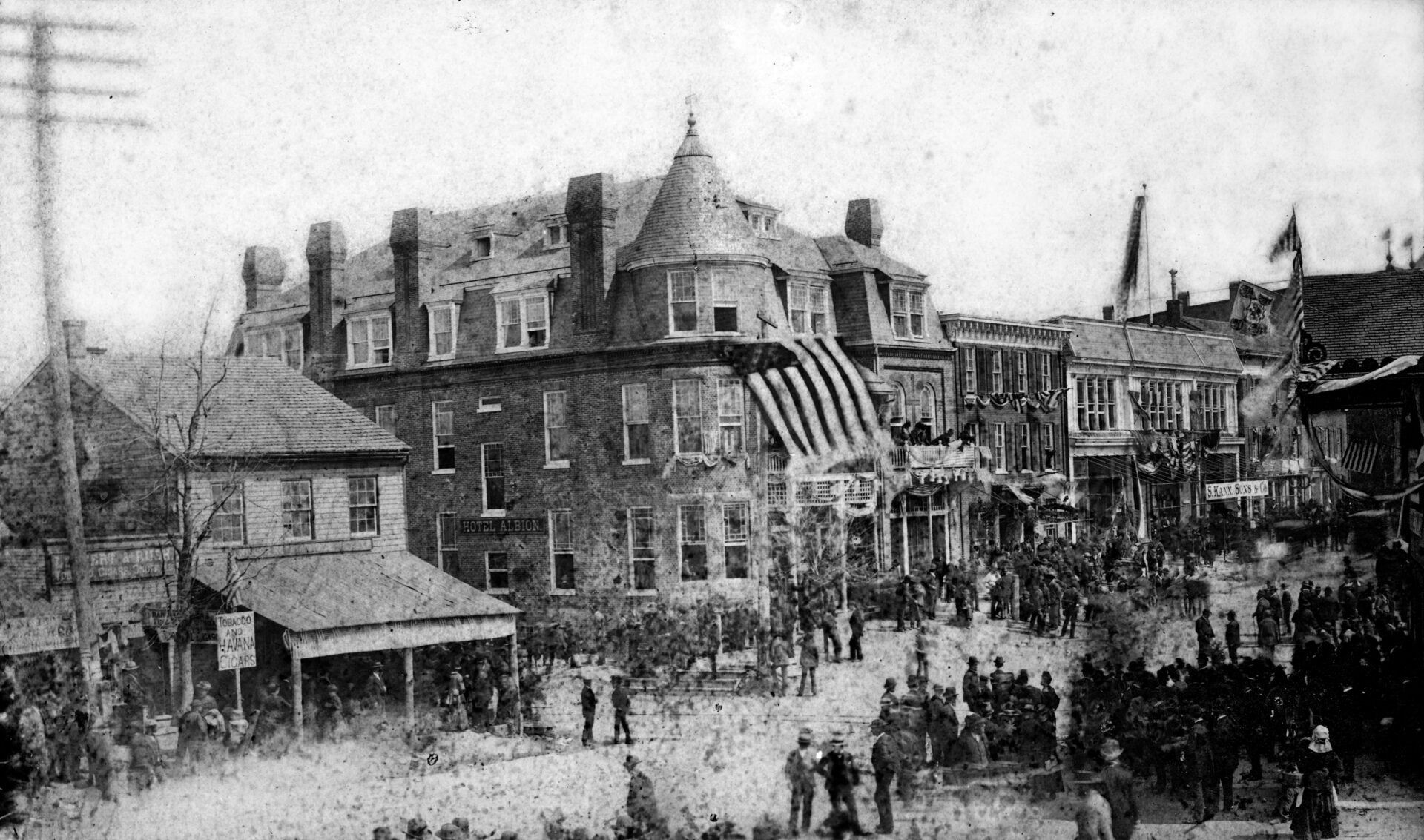 Photo caption:  This interesting photograph of downtown Westminster was taken during the celebration of Carroll County’s fiftieth anniversary in 1887.  The Albion Hotel still stands at the corner of Railroad Avenue and Main Street, but the building on the opposite corner was razed.  Johanssons Dining House now occupies that site.