Almost overnight, during the second decade of the twentieth century, Union Bridge changed from a typical Carroll County agricultural community to a miniature Baltimore.  At least that is my impression.

Years earlier, the Western Maryland Railway opened repair shops in town which attracted a substantial number of U.S.-born employees, but construction of the huge Tidewater Portland Cement plant beginning in 1909 brought a vastly different and larger workforce.  By late 1910, recent immigrants from eastern and southern Europe were mingling with local black and white men in the quarry pits and elsewhere throughout the company complex.  Union Bridge wasn’t prepared.

In 1910 and 1911, the Union Bridge Pilot frequently reported the need for more housing.  Although the cement plant responded by building a large boarding house for single men as well as family dwellings, workers were arriving faster than accommodations could be arranged.  Local families added to their income by renting space to boarders and eventually several commuter trains operated between Westminster and Union Bridge as the workforce reached about 300 men.

People “fresh off the boat” speaking little English lived side by side with Carroll Countians whose roots went back 150 years.  Things didn’t always go smoothly.  A newspaper of 1910 noted that there were at least two police courts in town.  Fights were commonplace as might be imagined when men worked 10 to 12-hour days at dangerous jobs, earned little, and sometimes drank in their free time.

You cannot fully appreciate the mix of foreign-born people unless you look at the 1920 federal census.  That reveals not only where someone was born, but also when he or she entered the U.S., whether they could read or write, their mother tongue, whether a naturalized citizen, and what job they performed at the cement plant (if a man).  The countries most frequently represented were Italy and parts of old Austria-Hungary.

There was no guarantee of continuous, full-time employment at Tidewater.  Work ebbed and flowed depending upon the demand for cement and the ability to keep all the vital pieces of equipment running simultaneously.  Foreign workers in particular seem to have come and gone frequently.  The local newspaper announced “a number of foreign laborers arrived at the Plant,” but the men and their families may have been constantly shifted among various operations across the U.S.  Children might be born in different states as their fathers moved to follow work opportunities.  While the 1920 Union Bridge census shows this large “foreign” population, earlier and later censuses do not.

The Pilot’s “Local News” column seldom referred to foreign workers by name unless a person met death in some manner.  Often the stories are very tragic.  “Louis Delecterri, a native of Italy, died at the Tidewater Portland Cement Works on Saturday evening, April 1, of pneumonia, aged 45 years.  He had been in this country but eight weeks.  He is survived by a wife and 4 children in Italy…”

How does someone trace his ancestry if a grandfather or great grandfather entered the U.S. during this time period as an unskilled laborer with a surname that was difficult to spell! 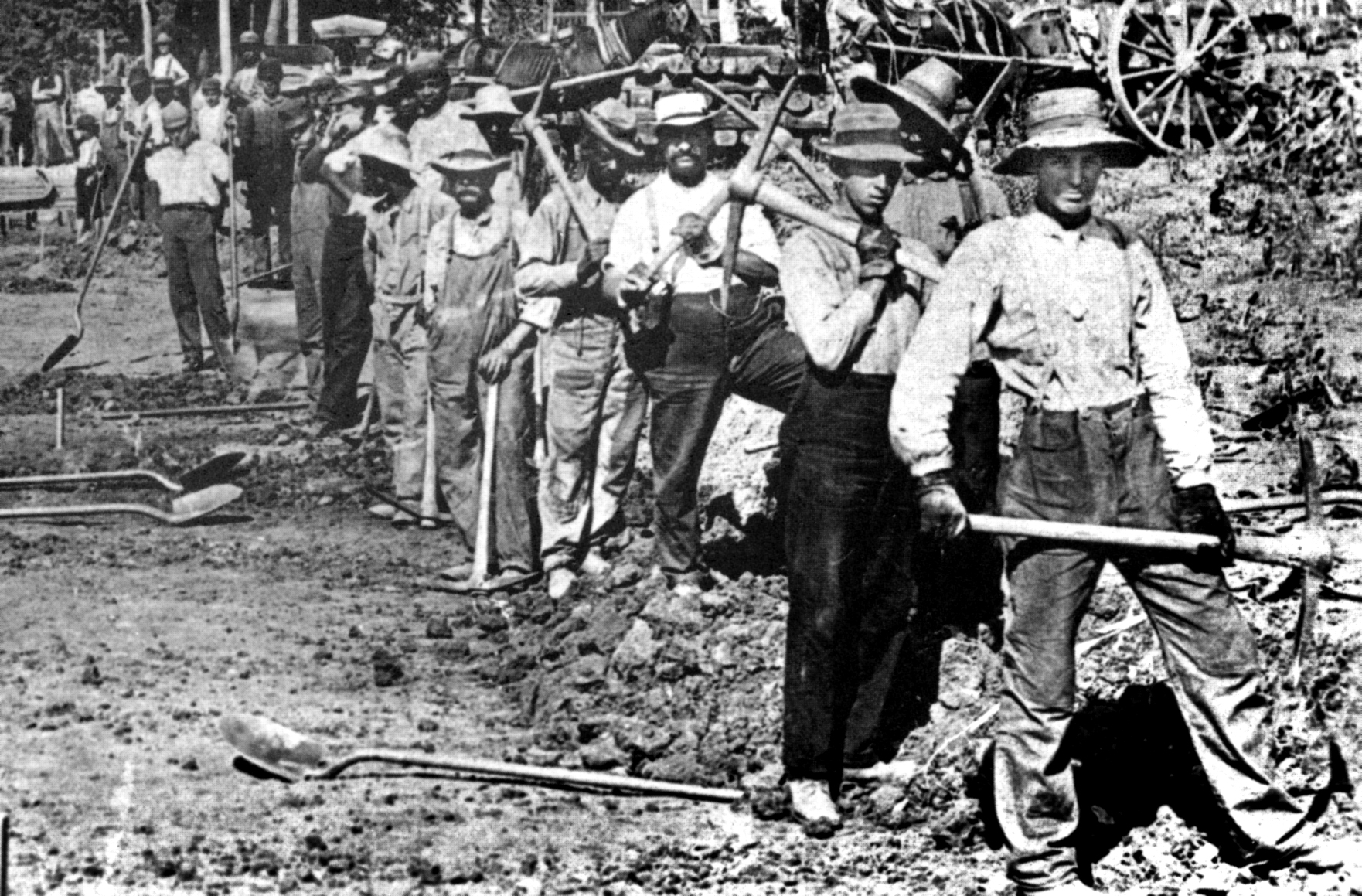 Photo caption:  In the early years, much of the work at the Tidewater plant involved hard physical labor.  These men are part of a crew building a railroad line from the plant to the Western Maryland Railroad shops in Union Bridge.