Are you still consuming Christmas leftovers – cookies, candy, turkey soup, ham sandwiches?  Well, Carroll County has lots of historic “leftovers” – relics of its past worth noting.  When you have time on your hands, you might want to look at these.

There is our impressive courthouse built in 1838 which is open to the public on weekdays although offices are off-limits as are courtrooms if court is in session.  Still, you can admire the handsome black and white marble floor, ceilings at least 20 feet tall and converted gas lighting fixtures.  The large courtroom on the second floor contains some original furniture.

While at the east end of Westminster, you can visit three smaller reminders of the past.  In front of the Shellman House at 206 East Main there is a rectangular block of stone near the curb – a carriage mount.  At one time there was probably a hitching post as well, but that has disappeared.  Along the eastern wall of the house at 297 East Main are scars left from the Civil War cavalry skirmish known as Corbit’s Charge.   Sabers clashed, carbines were discharged and errant bullets hit the house!  Behind the office building at 295 East Main sits a boundary stone erected about 1748 to mark the line between Baltimore and Frederick counties.  It has a BC on one side and FC on the other.  Carroll County wasn’t formed for nearly 90 more years.

At the northern edge of Manchester along Route 30 almost directly across from Long View Nursing Home is a stone mile marker sitting between the curb and the sidewalk – a leftover from the Reisterstown to Hanover Turnpike laid out over 200 years ago.  Enjoy figuring out the paths of bygone roads by noticing what direction old houses are facing.

On the north side of East Baltimore Street, near the intersection of Trevanion Road in Taneytown, sits the town’s Pennsylvania Railroad station which was moved from its original location along the tracks and converted into a shop.  The current police station is a modern structure although built in the same style.  Visit other wonderful old train stations still beside the tracks – the Western Maryland Railway Museum in Union Bridge or Baldwin’s Station in Sykesville. The latter is now a restaurant, but served passengers on the Baltimore and Ohio Railroad.  Both offer insights into travel during the heyday of rail transportation.

Two of my favorite “leftovers” are just off Rte. 31 as you head from New Windsor toward Libertytown.  Turn right onto Sam’s Creek Road and almost immediately on your left is the foundation of Engler’s Mill.  Peer through the brush when leaves are off the trees and you’ll see the stone remains of a dam which held back Sam’s Creek until it broke long ago.  The Englers needed that dam to harness waterpower for grinding grain at their mill.  While out of your car, look for the little arched stone bridge that used to carry traffic over Sam’s Creek on the New Windsor-Libertytown Turnpike.   It has survived numerous floods.

Carroll County has lots of other historic leftovers.  Have fun searching for them. 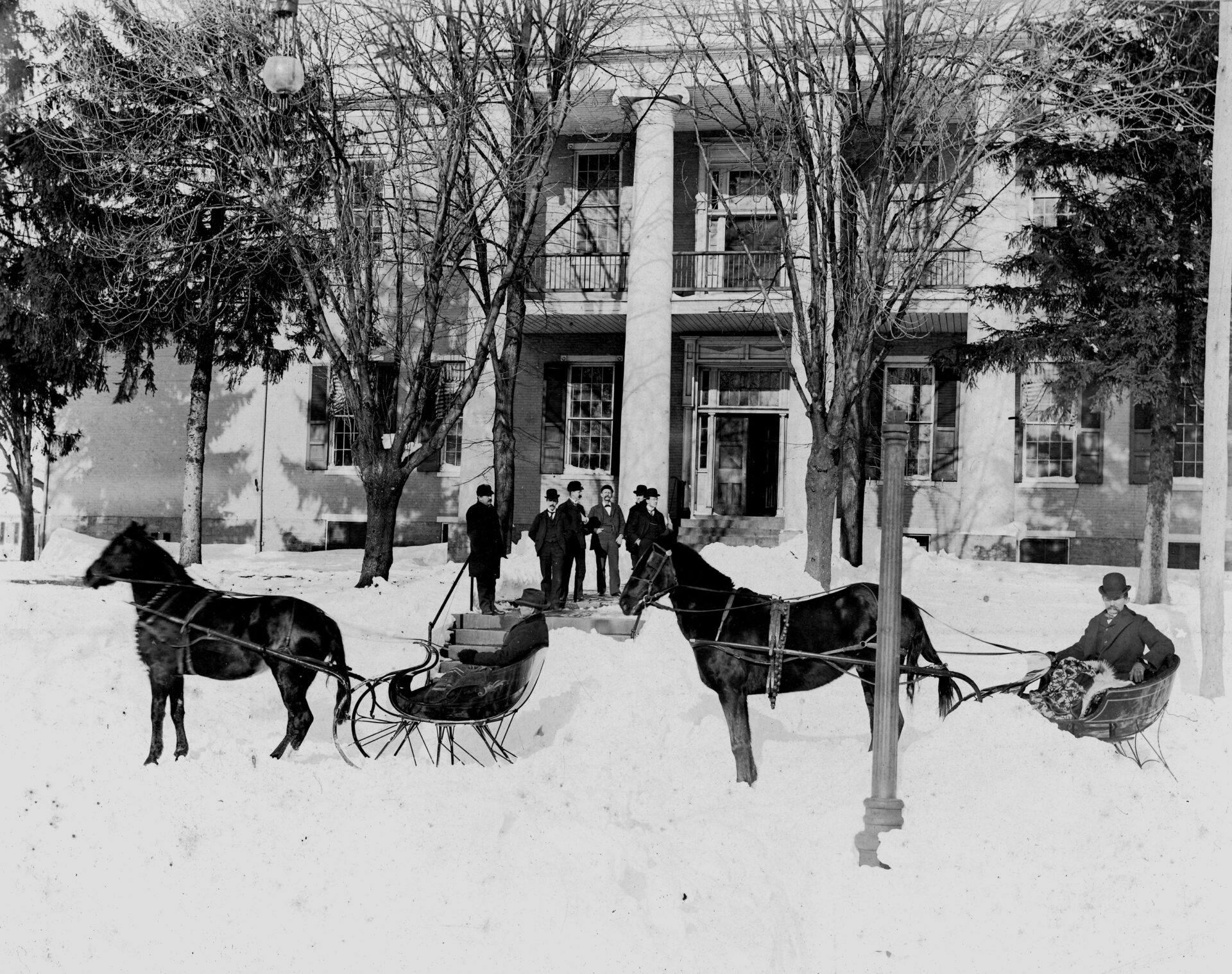 Photo caption: Carroll County’s Old Courthouse was built in 1838 for $18,000.  Its cupola, steps and Greek Revival portico were quickly added to create this imposing structure.  In 1882 the one-story wings provided additional space.  The white paint seen here was removed during renovations for the County’s 150th anniversary in 1987.