By the time the Civil War had begun in earnest, the Western Maryland Railroad stretched across central Carroll County from Finksburg in the east to Union Bridge in the west.  Lucky it was for the Union Army, too, as WMRR trains played a vital role during and after the 1863 battle in Gettysburg.   For days rail cars arrived in the county loaded with supplies and later carried away thousands of Confederate prisoners and wounded soldiers.  One passenger on the WMRR, however, never intended to travel home by train.

Major-General John F. Reynolds appeared on the outskirts of Gettysburg on the morning of July 1, 1863 on horseback.  He and his troops in the First Corps of the Union’s Army of the Potomac had spent the night camped between Emmitsburg, MD and Gettysburg, but rose early and marched northeast knowing that a large body of Confederate infantry lay off to the west.

Reynolds, age 42, was regarded as one of the finest officers in the Union Army – a West Point graduate who had served with distinction in the Mexican War and other campaigns and was widely respected for his courageous leadership.  At one point, Abraham Lincoln considered giving him command of the entire Army of the Potomac.   By 10 a.m. Reynolds had his hands full positioning units of the First Corps against Lee’s advancing army.  Most of the Union troops were still en route from Carroll County and had not reached the battlefield to provide support.  Never one to command from the rear, Reynolds rode quickly along his front lines about 60 paces from the enemy urging his men “forward for God’s sake and drive those fellows out of those woods.”  “Minnie Balls were flying thick” around him according to his orderly and, just as he turned to see if additional troops were moving forward, he was struck in the back of the neck by a bullet and fell from his horse, killed instantly.

His orderly procured a temporary box for his body from a Gettysburg marble cutter and by 1 p.m. had arranged for a wagon to transport the body away from the fighting.  During the night of July 1st, the wagon reached Union Bridge where John M. Hollenberger, a local fellow of 18, became part of the tragic story when he was pressed into service to construct a proper casket.  Reynolds’ body was surrounded with ice and the casket loaded on a Western Maryland Railroad car to begin the journey to his family’s home in Lancaster, PA.  After being embalmed in Baltimore, the body reached Lancaster on another train and Reynolds was laid to rest on July 4th.

At the time of his death, John Reynolds, a Protestant, was engaged to a Catholic girl named Kate Hewitt, but her parents hadn’t been told of the engagement because of the couple’s religious differences.  Shortly after John’s burial, the heartbroken Kate decided to enter the Daughters of Charity convent in Emmitsburg.

In researching this story, I wondered why John Hollenberger (spelled Hollenberry in some census records) was not in the army.  By 1863 he had reached the age to enlist.  One account says he was employed as a “pattern maker” for the railroad at the time of the battle and thus part of an industry vital to the Union’s success.  In the 1870 census, his occupation was listed as “telegrapher,” so perhaps he contributed to the Northern cause without taking up arms.  After his short brush with history, Hollenberger married, worked in the area as a plumber, died in 1922 and lies buried in Mountain View Cemetery at the edge of Union Bridge. 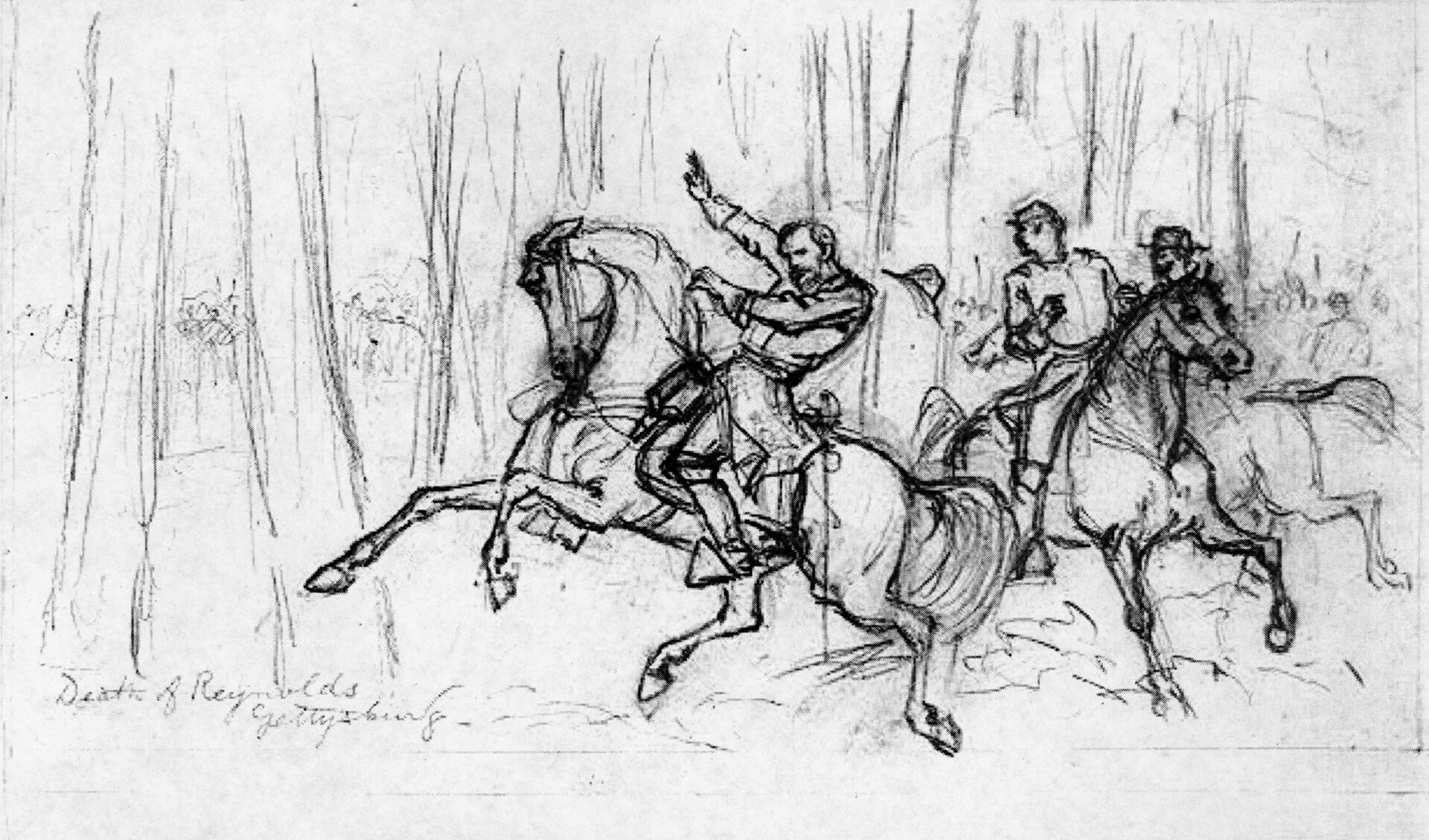 Photo caption: This drawing by Alfred Waud depicts the death of Gen. Reynolds at Gettysburg, July 1, 1863.   Waud served as an illustrator for Harper’s Weekly and accompanied the Army of the Potomac at every battle between the first battle of Bull Run in 1861 and the siege of Petersburg in 1865.  He was one of only two artists known to be present at the battle of Gettysburg.