This promises to be a very eventful year…beginning with the inauguration of America’s first African American president.  History, whether our own or that of our town, state, country or the world, gives so much more dimension to our lives than constantly living in the present or dreaming of the future.  Actual participation in historic events imprints them even more deeply on our psyches than simply watching them on television or reading about them in the newspaper or on the Internet.

Will you head to Washington on January 20th to be part of the excitement at Barack Obama’s inauguration and watch democracy unfold in person?  Even if you can’t manage the trip, will you spend a block of time during the day watching the various events on TV – the parade, the swearing-in, listening to the inaugural address, identifying our leaders gathered in front of the Capitol?  Surely you will miss a great deal of history if you simply turn on the news at 6 p.m. to watch the summary.

Last summer, my daughter came back from a family reunion and remarked, “Did you know Aunt Lucy was in Washington on August 28, 1963, for Martin Luther King’s ‘I Have a Dream’ speech?”  She was so impressed that a family member had been part and parcel of that very historic moment.  Yet I wondered why this same daughter, who was living in London in 1997, decided to go sailing the day of Princess Diana’s funeral!  Many of us in the US spent hours glued to our televisions that morning, just as we had in 1981 when she married Prince Charles amid much happier pageantry.

Admittedly, TV cameras and commentary provide better coverage than standing in a crowd six deep on a street corner watching for the slightest glimpse of one or two important figures, but there is something thrilling about being part of an historic event.  It must have been during the summer of 1976 that Baltimore celebrated America’s bicentennial with a re-enactment of the bombardment of Fort McHenry.  Even though the bombardment actually occurred in 1814, it is so much a part of our history I recall it was incorporated into the events of that exciting bicentennial year.  A neighbor and I left Westminster with our six children about 3 a.m. and got onto the grounds outside the fort in time to see the re-enactment “by the dawn’s early light.”

On the morning of September 11, 2001, a supervisor at the Carroll County Public Library shouted for us to come into his office and watch the drama unfolding on his computer screen after the first tower of the World Trade Center had been struck.  As we stood there in total horror, a second plane hit the other tower!  History…carved into your memory for the rest of your life.

While dramatic moments such as these come to mind first, there are thousands of less dramatic ones which shape our lives and shaped those of our ancestors.  The accompanying photo was taken after a major snowstorm hit Carroll County in March 1914 “with the suddenness of a tornado.”  People were blown off their feet by the winds, houses and barns were unroofed and trees toppled.    Compared to what happened on 9/11, this was “peanuts,” but to our ancestors it certainly wasn’t.

Newspapers preserved on microfilm at the Historical Society of Carroll County captured these events and are available to people who want to check details of stories which have come down in their families.  The holidays are often a time for reminiscing.  Check out stories you recently heard and keep your family’s history alive. 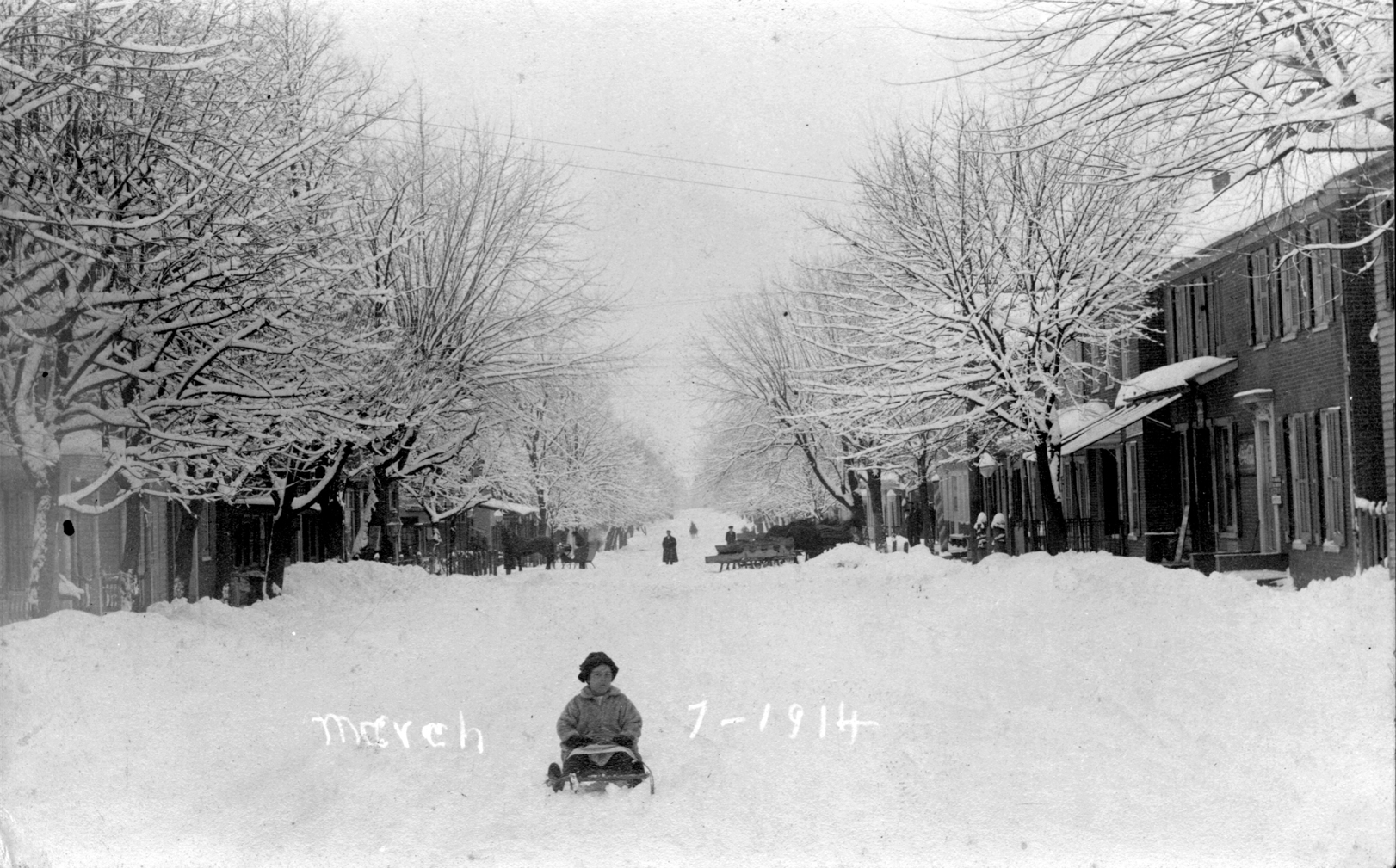 Photo caption:  Calm after the storm – sledding down Manchester’s Main Street after a fierce blizzard blanketed this area in March 1914.