Carroll Yesteryears
28 April 2019
New Exhibit Shows Toll World War II Took on Taneytown
By David Buie
On April 7th of this year the Taneytown Historical Museum opened its season with the exhibit
“WW II Impacts Hometown: The Far-reaching Effects WW II Had on Taneytown.” The large
collection of memorabilia does a fantastic job of providing a clear understanding of the strain put
on a small community and its resilience in overcoming the fears and losses placed upon it.
Entering the Second World War the population of Taneytown was 1,028 according to the U.S.
Census of 1940. By the conclusion of the war, the town and surrounding area had sent 292 men
and women to participate in the war effort both at home and overseas, leaving the population
significantly reduced. By the end of the war, the area would experience the pain of losing a total
of ten men.
After six hard years of fighting in Europe and Asia (1939-1945), the defeat of the Axis powers
was official and their alliances dissolved. By Memorial Day 1946 Taneytown’s service members
had returned, the families whose members had paid the ultimate sacrifice had been notified, and
the town was ready to celebrate. According to an article published in the Hanover, PA, Evening
Sun, that year’s Memorial Day observance featured a huge parade consisting of many units
which formed at the War Monument in the eastern part of town. The line of march was west
along Baltimore Street to the cemetery behind the Reformed Church on West Baltimore Street
where a ceremony took place.
The parade, led by members of the Maryland State Police, included marshals on horseback, the
Mayor and City Council members, Gold Star mothers, pastors of Taneytown’s churches, color
bearers and a color guard, Taneytown’s service organizations, several bands, and representatives
from many other groups. At the cemetery patriotic songs were played, an invocation was read by
Rev. Glenn L. Stahl, Pastor of Trinity Lutheran Church, and a “Thank You” was given to the
families of the veterans. Brigadier General D. John Marky of Walkersville read a memorial
address. The Commander of the Hesson-Snider American Legion Post No. 120 read a solemn
roll call of World War I and II casualties: from World War I – John Alexander, Howard Frock,
William D. Hess, Raymond L. Hesson, Verle C. Snider, and William Fox; from World War II –
Paul Copenhaver, Kenneth Crumbacker, Elwood Fream, Richard Hull, Bruce Keeney, Lacey
Phillips, George Lemmon, Richard Sell, Frank Unger, and Arthur Neal. Following the roll call, a
Gold Star certificate was presented to Mr. and Mrs. Fream whose son Elwood never returned
after he was reported missing over Germany.
Altogether, an estimate of those who came to participate in the day’s observance numbered several thousand. The streets were reported to be lined with people and every front porch along the parade route was crowded. Memorial Day parades in Taneytown have long since disappeared, but it is possible to catch aglimpse of what life in the town would have been like between 1939 and 1945 by visiting the Taneytown Historical Museum during open hours Fridays, Saturdays, and Sundays.  Guest columnist David Buie is a Taneytown resident who has a passion for Carroll County and its place in history. 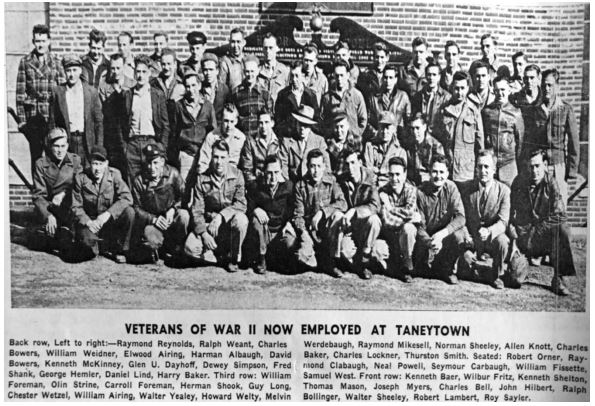