Off to the Races

Just south of Middleburg, Maryland, beneath what may be a field of corn later this year, lies hidden a long forgotten horse track. This is where Cloverbrook, the first horse bred, born and trained in Maryland to win the Preakness, was introduced to the sport. Visible today only through the use of aerial imagery, this half mile exercise track was built by Edwin Augustus Clabaugh on his thoroughbred stock farm.  Clabaugh was born on the farm in 1818, the son of John and Martha (Harris) Clabaugh. Though he and his older brothers George Washington and William Henry were the sons of a successful farmer, they left the farm early in life to make fortunes elsewhere. In 1862 The Baltimore Gazette listed 20 of the wealthiest citizens of Baltimore. E.A. Clabaugh was on that list. His annual income in today’s money exceeded half a million dollars. Following his father’s death he returned to that Middleburg farm, transformed it into one of Maryland’s leading thoroughbred farms and named it “Cloverbrook.”

According to an obituary of Clabaugh, by 1844 he had opened a “country store” with George U. Graff in Cumberland. This is not surprising considering that his older brother G.W. Clabaugh had begun his career as a grocer near Middleburg, but removed to western Maryland in the 1830’s to establish a similar business. In an 1851/52 directory of grocers in Alleghany County, the two brothers are listed as separate businesses. However, this was not the only venture pursued by Augustus. From 1849 to 1852 he and his other older brother W.H. Clabaugh operated the Woodgrove Furnace ironworks near Morgantown, Virginia. This would have been an operation employing 150-200 workers to produced pig iron.

Augustus and his family moved to Baltimore in 1852. He had married Elizabeth Mary Delaplaine, the daughter of John and Sophia (Charlton) Delaplaine in 1841. They would have three children, but only their son, Usher, would survive to adulthood. Now in Baltimore, Augustus oversaw an extensive renovation of the famed Fountain Hotel and became its proprietor, having claimed experience in running a hotel in Cumberland. Within months William Henry and his family moved to Baltimore to join his brother as “Clabaugh Brothers,” proprietors of the Fountain.

By 1856 Augustus was again in partnership with George Graff. They went into a field not unfamiliar to an owner of a country store or hotel. They built the Mount Vernon Distillery in south Baltimore across the street from today’s Ravens’ Stadium. One of his first brands was “Charlton’s Old Rye Whisky,” a nod to his mother-in-law. Eventually, he carried this and other brands at their enormously successful wholesale wine and liquor warehouse. G.W. Clabaugh, who had founded Braddock Distillery near Cumberland, followed his brothers to Baltimore in 1864 and established his own wholesale liquor business, the proceeds from which allowed him to buy “Antrim,” six miles from “Cloverbrook.”

In 1873 the partnership sold the distillery and concentrated on the wholesale business. Clabaugh also turned his attention to banking. In 1875 he became president of the People’s Bank, a position he held to his death. At this time he was also a member of the Corn and Flour Exchange with his son Usher. However, what really grabbed his attention was horse racing. As his obituary stated “Although … well known to the commercial world, it was his connection with the turf that brought his name so prominently before the public.”

E.A. Clabaugh’s “Cloverbrook” farm received a fair amount of attention in the years leading up to the 1877 Preakness. In 1874 the Democratic Advocate ran an article from Turf, Field and Farm. A portion of it reads “The farm is admirably situated. The soil is productive, and the woodland connected with it is parklike in character, the timber being chiefly hickory and white oak, with no undergrowth. There Mr. Clabaugh was born, and when fortune smiled upon his efforts he bought back the home of his fathers, and, to his credit, did not mar the old homestead by new-fangled improvements, but kept it as it was in the days of his boyhood. To the West of the house rises a range of the Blue Ridge Mountains, and from the half-mile track, which is situated on the Eastern portion of the farm, the view on a clear day is enchanting…”

“The principal portion of the stock is kept in an immediate barn, for which this country is famous – no citizen being considered ‘fit to run for the Legislature’ until he has built a barn ten times as large as his dwelling-house, and painted it a bright red. Mr. Clabaugh being a man ‘fit to run for the Legislature,’ painted his barn a brilliant red, but the boxes of the young racing stock, situated near the race-track, are whitewashed, and are of the same style of architecture as the stables at Saratoga.”

In November 1876 the Baltimore Sun published an article following in part:

“With Pimlico ranking among the first race meeting places in the country, increased attention to breeding for the turf is developing itself in Maryland. The leading stock farm in the western part of the State is ‘Cloverbrook,’ belonging to Mr. E. A. Clabaugh, at Middleburg, Carroll county, on the line of the Western Maryland railroad…   ‘Cloverbrook’ is a model farm, every acre of which is as clean as a garden, surrounded by trim enclosures. It comprises 340 acres, a dwelling eighty years old, two great red barns, 80 by 40 feet, which proclaim the plenty that comes from industry and thrift. Mr. Clabaugh states that in ten years he has used two hundred bushels of lime to the acre, and his yield has equaled sixty bushels of corn and twenty-seven of wheat to the acre… For stock breeding and training purposes there are on the place well-arranged stables, a paddock for brood mares, with warm southern exposure, a beautiful half-mile track, and other well-devised facilities, managed by Mr. Jeter Walden, who has been with Mr. Clabaugh for two years, and belongs to a well-known family of trainers, who enjoy an established reputation for integrity. The stock comprises about thirty head, including some trotters… The very short time Mr. Clabaugh has been breeding shows the adaptability of the country for stock raising. Beginning in 1870 with the purchase at Saratoga of Vauxhall stallion, the idea, at first, was to raise trotting stock by breeding fine trotting mares to a thoroughbred horse, which is the reverse of general practice… but eventually the trotters were given up and attention devoted wholly to thoroughbreds.”

The May 5, 1877 edition of The Democratic Advocate carried the following piece:

“For Pimlico.- The stable of Mr. E. A. Clabaugh left Middleburg on Tuesday for Pimlico, Baltimore, via the Western Maryland Railroad, where they will go into training for the May meeting. The stable is composed of Piccolo, six years old; Cyril, four years; Carroll, three years; Cloverbrook, three years, and Mystic and Jet, each two years old.  They are in [the] charge of Jeter Walden, a noted trainer, assisted by Cyrus Holloway, an English jockey. After Pimlico the horses will go to Jerome Park, to run in June, thence to Saratoga in July and August, and afterwards to Jerome Park and Pimlico in October.”

Nineteen days later on May 24th Cyrus Holloway made history by riding Cloverbrook to victory in the Preakness by four lengths – the first Maryland sired, trained and owned horse to win the Preakness. The Baltimore Sun described Cloverbrook (sired by Vauxhaul) as “about 15 hands 2 inches in height, with a clear and neat head, resting on a perfect neck, which runs into a fine set of shoulders. He has a good body and back, with splendid hips and stifles, and he is very strong across the loin. He stands firmly on a capital set of legs, that are well put under him.  In color he is a chestnut, with four white feet and blaze face.”

Augustus Clabaugh had been a part of the Maryland turf for a number of years, his jockeys wearing the ruby and light blue sleeves and cap, his horses winning and losing races, but one can imagine the thrill that he must have experienced with that win. On June 9th Cloverbrook won the Belmont Stakes.  Suddenly, Carroll County and Middleburg were on the national horse racing map. Clabaugh’s decision to buy back his family farm following his father’s death brought nationally recognized thoroughbred training to Middleburg for the next eighty years.

Three things made that possible. First, Clabaugh’s success in business provided the capital to build nearly from scratch a thoroughbred stock farm at his boyhood home. Second, he knew that he needed convenient rail transportation to move his horses from “Cloverbrook” to the various race tracks along the East Coast. He convinced the Western Maryland Railroad to change its planned route south of Little Pipe Creek to the north and through his farm a short distance from his stables. Third, Clabaugh hired Jeter Walden to be his trainer. This introduced Middleburg to the Walden family. Jeter’s older brother was R. Wyndham Walden, who would eventually establish the famous nearby thousand-acre thoroughbred stock farm “Bowlingbrook,” which by then included “Cloverbrook.”

Clabaugh was actively involved with thoroughbred racing in the following four years. An early member of the reorganized Maryland Jockey Club, his reputation for just and impartial decisions contributed to his selection as one of the five stewards of the Saratoga Race Course. In 1881 the New York Times reported that his winnings had dropped that year, but the Chicago Daily Tribune printed that he was in the process of “making great improvements in his racing stud.” Then in the November 28, 1881, edition of the Baltimore Sun was a notice that Clabaugh had been seriously ill for a week. A described pillar of the Maryland turf died the next day. The funeral was held at the small Methodist church adjacent to the “Cloverbrook” farm. The Sun reported “a large concourse of friends and relatives from the vicinity and from Baltimore, Frederick Hagerstown and Philadelphia attended.” Former Governor Oden Bowie was one of his pallbearers. August Clabaugh was buried in the churchyard within sight of his birthplace. His son, Usher, inherited “Cloverbrook,” but made it known that the stable would be liquidated. The Baltimore American described Augustus Clabaugh as “modest and retiring, and disliked notoriety. He was kind and generous to a fault… it often being remarked that his jockeys… were treated as members of his family.”  Usher died four years after Augustus, and the farm was sold. “Cloverbrook” and its track eventually faded from memory. 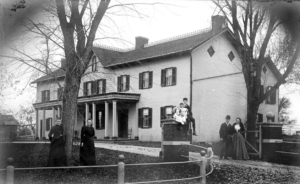 Photo caption 2: Cloverbrook Barn: The one remaining of two such barns when owned by Edwin Augustus Clabaugh. Photo by the author. 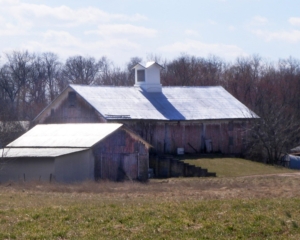