Each year as the end of June rolls around, we are reminded of the many ways in which the Civil War impacted our area.  In three successive years – 1862, 1863 and 1864 – parts of the Confederate cavalry invaded Carroll County, then rapidly moved elsewhere.

In late June 1863, Union General George Meade’s Army of the Potomac knew it must stop the Northern invasion by Robert E. Lee whose Confederate troops were swarming all over central Pennsylvania.  Tired, hot and hungry Union soldiers were marching north through Maryland as fast as they could to intercept the Confederates and Union wagon trains were rumbling over the dusty roads, but the huge Union Army needed more men and supplies if it were to successfully fight a battle of any size.

Union General Hermann Haupt, a West Point graduate who had been put in charge of United States military railroads in 1862, reconnoitered the situation and determined a significant confrontation was likely to take place in the vicinity of Gettysburg, Pennsylvania.  Because both the Baltimore and Ohio Railroad which reached Frederick, Maryland, and the Northern Central Railroad which reached Hanover Junction, Pennsylvania, had been cut by Southern troops, the Western Maryland Railway which crossed Carroll County was the only choice to deliver supplies close to the anticipated battle.

The Western Maryland had only been operating here since 1861.  It was a small railroad with little rolling stock, a single track with no sidings, no sizable depot in Westminster and no turntable.  During peacetime, the tracks carried just four cars a day between Baltimore and Westminster.  Luckily, the drawbacks of the WMRR did not seem insurmountable to Haupt.  Before the war he had been Chief Engineer for the Pennsylvania Railroad and in the current situation he moved with lightning speed to expand the line almost overnight.  More cars were brought in; more wood arrived to fuel extra locomotives; more arrangements were made for supplying water; and four hundred men came from Alexandria, Virginia with lanterns, buckets and rails.

Within a matter of just a few days, the line was carrying thirty trains a day moving in convoys of five cars at a time.  That was 150 cars going back and forth between Westminster and Baltimore delivering troops, food and crucial materiel for the army.  Soldiers protected bridges along the route to ensure neither Confederate troops nor Southern sympathizers would blow them up and the convoys themselves carried guards.

As soon as the cars arrived in Westminster they were immediately unloaded so they could be sent back to Baltimore.  This activity associated with the railroad added to the huge military presence in town – about 5,000 wagons, 30,000 mules, and perhaps 10,000 troops.  Ultimately, Haupt’s whole operation was so successful that when the Union Army began its half-hearted pursuit of the fleeing Confederates after their defeat at Gettysburg, it experienced no shortage of supplies.

Next weekend, June 26-27, the Corbit’s Charge Commemoration on North Center Street in Westminster will be a chance to learn about a small but important local engagement in June 1863.  Check this newspaper for more details about the event. 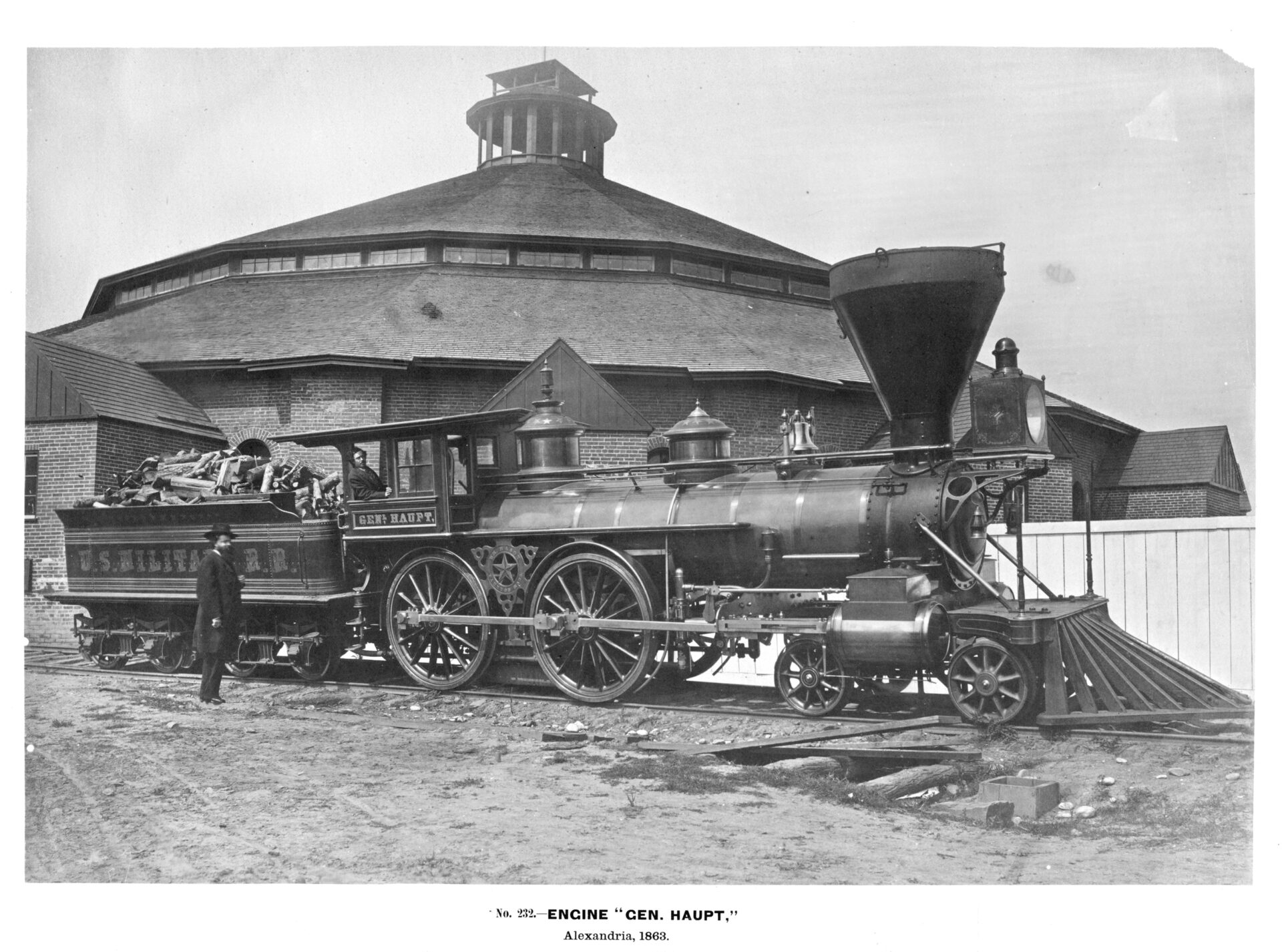 Photo caption:  This 1863 photograph shows the “Gen. Haupt,” a wood-burning locomotive, at a roundhouse in Alexandria, Virginia.  The engine was named for General Hermann Haupt who was in charge of military railroad operations for the United States during part the Civil War.