6 June 2010 – Sharing Stories Helps Bring the Past to Life

6 June 2010 – Sharing Stories Helps Bring the Past to Life

Sharing Stories Helps Bring the Past to Life

Interesting people with fascinating stories to share have played an important part in creating this column.  Edward Bachman, who has spent his ninety-plus years in Carroll County, phoned me several months ago.

Wentz ancestors on his mother’s side have lived north and south of the Pennsylvania line for more than two hundred years.  He says very few people pay much attention to his area, but that is a real shame because it abounds with stories that reflect its strong Pennsylvania German traditions and rural way of life.

Mr. Bachman’s mother spoke only German until she began attending Bish’s one-room school located just this side of the Mason-Dixon Line in the 1890s.  Many years later, members of her family continued to speak it when they wanted to keep secrets from nosey little children.  Even into the 1950s there were some farm families in this rather isolated region who regularly spoke the Pennsylvania German dialect, or spoke English with a heavy accent.

Jacob Wentz (1784-1869) had four sons.  Three of them were masons who not only laid bricks but made them as well.  If the young men had a job 15-20 miles away from home, they might rise as early as 2 a.m., hitch their horse to a dog cart which carried their brick molds and other tools, and begin their lengthy journey, taking turns riding and walking beside the cart.  When close to their destination they would blow a few loud blasts on a horn to announce their approach…and give warning they would welcome a hearty breakfast upon arrival!

In 1860, the same three sons built little Mt. Zion Church, which is now known as the Wentz Meeting House, about a mile over the Pennsylvania border in West Manheim Township, York Co.  They made the bricks in the meadow of their father’s nearby farm.  Today the meeting house, although no longer in use, is well-preserved and the site of family gatherings.  Most of the names in the graveyard reflect the Pennsylvania German families who spent their lives as farmers, millers, blacksmiths, carpenters, etc. in the area.  When a family like the Wentzes has lived so long in one locale and each generation has produced many offspring, I would bet that almost everyone in north-central Carroll County has a Wentz on their family tree.

In recent years, Mr. Bachman has assembled dozens of scrapbooks to hold his family’s genealogy, photographs, obituaries, funeral cards, and news items as well as important local events.  One Wentz clipping in particular caught my attention.

Before giant machinery harvested farm crops, harvesting was done by hand and it was often back-breaking labor under summer sun.  An 1895 newspaper noted that Philip K. Wentz wanted to express his thanks to friends and neighbors who had helped him pick 206¾ bushels of peas – the yield from 3 bushels of seed.  Undoubtedly, Philip was prepared to extend the same helping hand because that was what friends and neighbors in the country always did.

Stories like these have made the history and people of northern Carroll County come alive for me.  Thank you for sharing, Mr. Bachman. 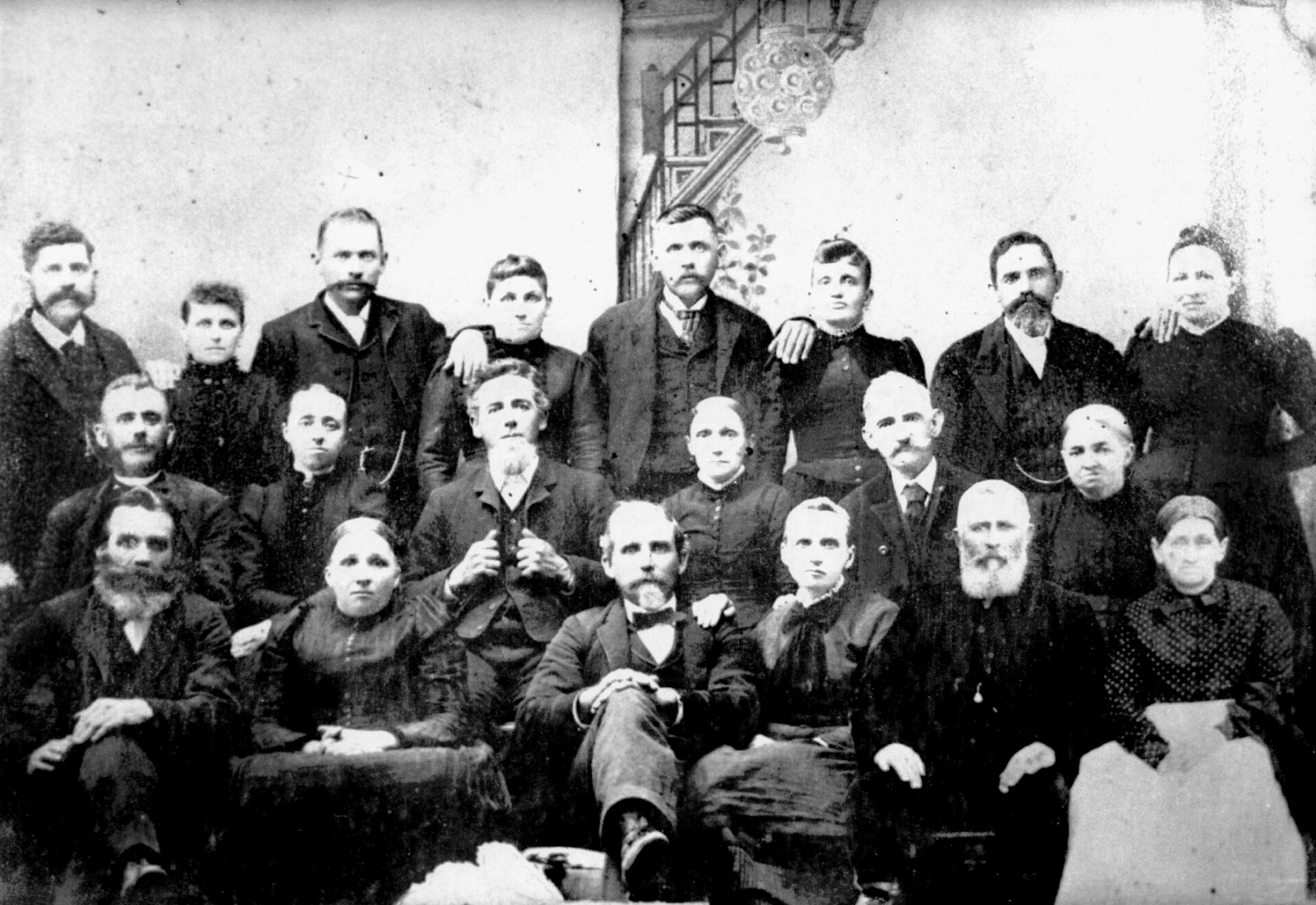 Photo caption:  A family photograph probably taken in the 1890s shows the ten children and spouses of Philip Wentz (1812-1891) and his wife, Anna Mary Krumrine (1818-1881).  Edward Bachman’s grandparents on his mother’s side are the couple on the left in the top row.