We should be grateful that not everyone in the nineteenth century threw out their copies of local newspapers and that recycling was many years in the future.  Those old papers give us an idea of how our great grandparents in Carroll County spent the Fourth of July.

Just one year before the U.S. celebrated its centennial, the American Sentinel of July 3, 1875, offered a glimpse of what was planned for the 99th anniversary.  “Gas pipes have been erected around the Court House, which will brilliantly illuminate the grounds on every side.  At the front gate a large arch has been erected from which will issue 200 gas jets.  This is surmounted by a large star of gas jets, while beneath will be a beautifully painted and illuminated screen, on which will be depicted a large eagle with outstretched wings, surrounded with stars, holding a scroll on which will be inscribed the word ‘Amphions.’  The pillars supporting the arch will be draped with flags.”

The Amphions, a Westminster group named after a character from Greek mythology, were obviously very patriotic and concerned that America’s independence be properly noted.  Their plans also included having decorated tables on the court house grounds where young ladies from Westminster would serve ice cream, water ices, and cakes to visitors.  In the center of a large fountain would be a nearly life-size statue with “a powerful jet of water, forced by a steam pump,” spouting from its head.  Thirsty celebrants could obtain ice cold lemonade from a “Jacob’s well.”

Not content with the above decorations, the Amphions also strung 400 to 500 brilliantly colored lanterns around the grounds.   The lanterns, gas lights and flags must have made a festive scene once the sun went down.

Of course the celebration was not complete without a reading the Declaration of Independence, singing of “national odes by the choirs of different churches, assisted by a number of amateur vocalists from Baltimore,” and a display of fireworks “of the most costly kind.”  Arrangements had been made in advance with the Western Maryland Rail Road to bring excursionists to Westminster at special rates and convenient times to participate in such an extraordinary event.  The newspaper promised visitors “the whole affair will be one of, if not the grandest things of the kind they ever witnessed.”

One wonders if this celebration could be topped the following year on our one hundredth anniversary!  I don’t recall that anything quite so spectacular has been attempted in the forty years I’ve lived in Carroll County.  Fireworks are now the centerpiece of our July Fourth celebrations and it has been difficult to raise enough funds to put on the kinds of shows we’ve come to expect.

Four years before the event above, Independence Day celebrations described in local newspapers were much less elaborate.  A group of about seventeen ladies and gentlemen from the “West End” of Westminster hopped aboard the Western Maryland Rail Road as far as Cranberry Station for a day in the country with quiet games of croquet and Authors, a tasty “pic nic” and a thunderstorm! 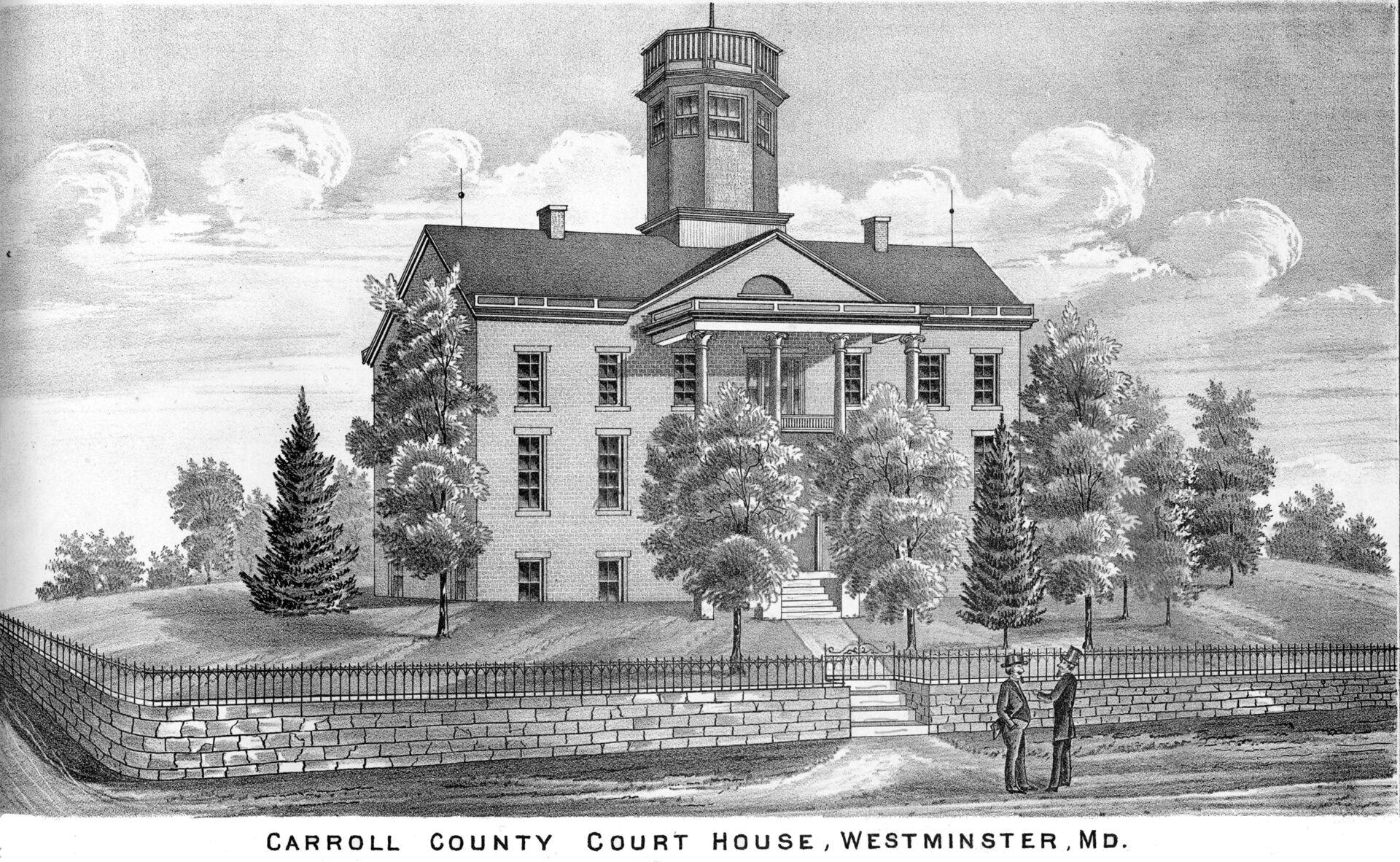 Photo caption: The Carroll County Court House as it appeared in the late 19th century.  Imagine the grounds set up with tables, hanging lanterns, fountains, and the other July 4th decorations described in the accompanying article.