Eli Bentley, a resident of Taneytown during the late 1700s and early 1800s, is probably Carroll County’s best-known craftsman – a maker of clocks which are highly prized possessions of those lucky enough to own them. The Historical Society is proud to have five of them in its collection.  Stop in at 210 E. Main Street, Westminster, to see them on display in the Society’s gallery.

Bentley was born in Chester County, Pennsylvania, about 1752, married Mary Hunter when he was 20, and already had a reputation as a clockmaker before moving to Taneytown around 1778/79.  Perhaps he had several motives for relocating. Chester County was close to Philadelphia and Wilmington, Delaware, and already a prosperous area with well-established craftsmen. He may have felt the market for his work would be better in a growing area like Frederick County, Maryland. Another influence may have been the Revolutionary War.  George Washington and his troops were fighting and encamped near Bentley’s doorstep in 1777/78.

In 1782, Frederick County court records show Eli took 17-year-old John Riley as an apprentice, agreeing to teach him “the art and mistery of a Clock and Watch maker also to do all kind of Silver Smit[h] Work…” The apprenticeship was to last four years.   Fourteen years later, seven-year-old Elie Flint, a free African American boy, became an apprentice for an unspecified length of time. He was expected to learn similar skills.

Bentley bought and sold quite a few properties in and around Taneytown between 1779 and his death in 1822.  At one point, he advertized a tavern for sale or rent at the intersection of the Philadelphia-Winchester road and the Baltimore-Pittsburgh road – the very center of Taneytown today.

Although known as both a silversmith and clockmaker, Eli Bentley is best-remembered for his tall case clocks which were probably his “bread and butter,” with silversmithing and watch-making and repair on the side.  Well over 50 of his clocks have survived. Most of us refer to this style as “grandfather clocks,” rather than by the more formal name.  Bentley made the intricate brass works and may also have painted or engraved the metal clock faces, but the wooden cases were constructed by a cabinetmaker. Major Alexander McIlhenny of Uniontown bought clock works from Bentley in 1817 for $60, then paid cabinetmaker George Christ an additional $40 for a case. This was a huge investment at the time – an indication of McIlhenny’s wealth.  Most makers left their names somewhere on the faces of their clocks, but sometimes they appear elsewhere – even on the pendulums. Identifying the cabinetmaker who built the housing can be more difficult.

Tall case clocks gradually went out of style as the 19th century progressed, replaced by smaller ones such as those mass produced in the factory of Seth Thomas of Connecticut. My family owned an antique grandfather’s clock and I loved the deep sound when it struck the hour and the comforting tick of its pendulum.

Eli Bentley lies in Trinity Lutheran Cemetery in Taneytown. The “plank” erected over his grave in 1822 has long-since disappeared, so the site is unknown. 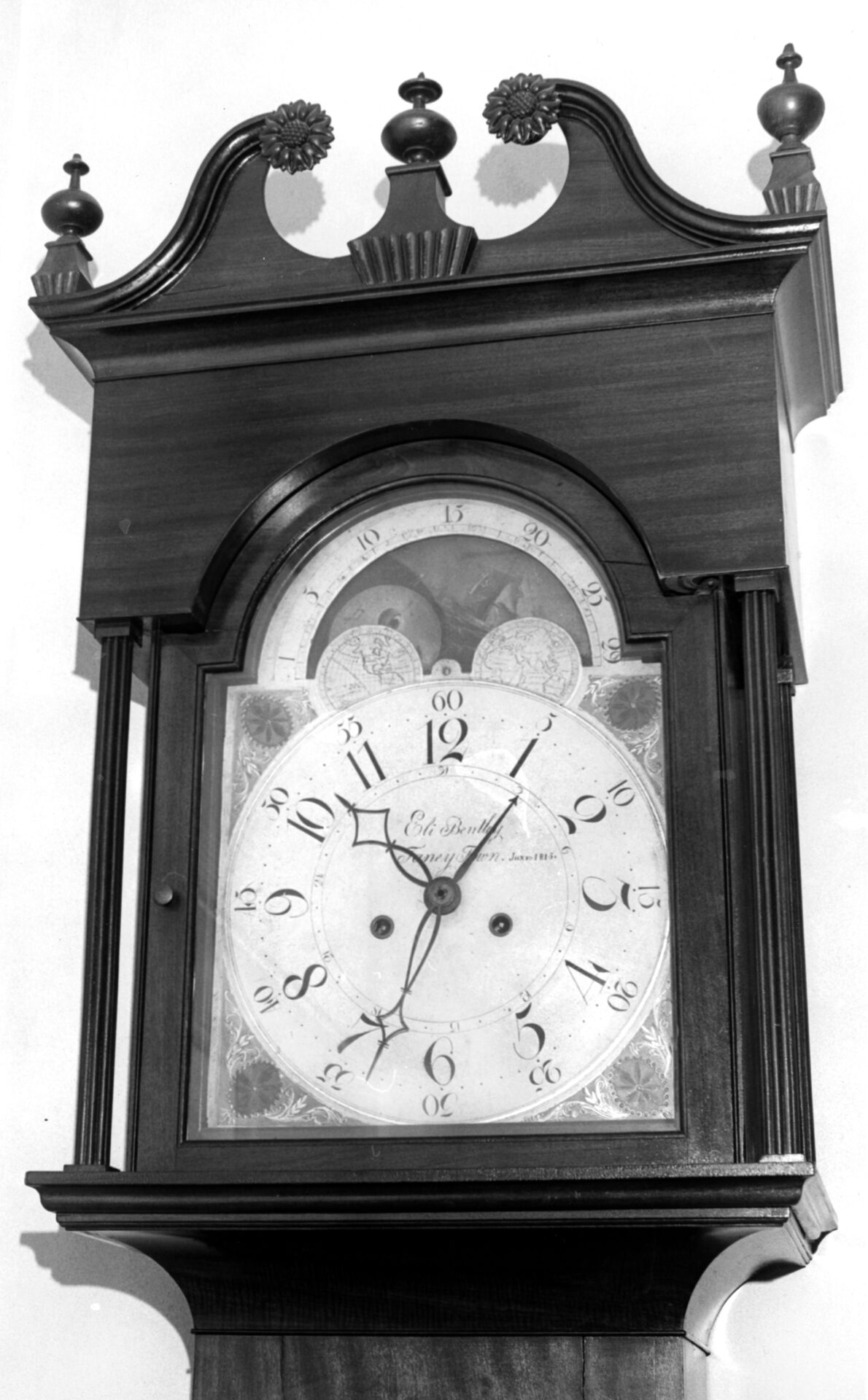 Photo caption: This is the top of one of Eli Bentley’s tall case clocks owned by the Historical Society of Carroll County.  The removable wooden top of the case is usually referred to as the “bonnet.”  Look closely to see Bentley’s name on the clock face.