You might think Carroll County had never experienced an ice storm quite as nasty as the one we had this year on February 4-5, but it did.  The photo accompanying this column captured the havoc wreaked by a storm which hit February 21-22, 1902.

A long article in a Westminster newspaper of March 1, 1902, said, “It would take more space than the columns of the [AMERICAN] SENTINEL afford to give a minute and detailed account of the great sleet storm which began in this locality on Friday last and speedily culminated in the destruction of a large amount of certain kinds of property.”   The storm began in the early morning and by noon rain was freezing on every surface.  Telegraph, telephone, and electric light wires looked like “great cables of ice, while trees appeared almost like solid masses of frozen water.  The ice on the wires reached a diameter of an inch to an inch and a quarter. Then the effect of the great weight upon the objects spoken of began to be felt severely. Telephone wires broke in every direction; telephone poles snapped off like pipe stems; great branches of trees fell crashing to the earth and the alleys in this city were blockaded by the debris.”

In those days, the poles of the Western Maryland Telephone Company carried between 200 and 300 wires, so they soon collapsed under the strain and lay on the streets “with cross-arms broken and lines torn, twisted and piled in great masses on the earth.  The Chesapeake and Potomac Telephone Company lines fared just as badly.  Even the stronger wires of the Electric Light Company could not withstand the weight.  It is hard to imagine how dangerous conditions must have been, but the paper didn’t report fires or serious injuries.

Once the sun came out the scene was “indescribably beautiful,” but it “soon changed from the appearance of a world of sparkling, glittering gems to the dull and somber hues of leafless winter.” Then, as now, it must have been difficult to appreciate nature’s beauty when the temperature in your house approached freezing and your woodpile was gone.

After our experiences this winter, let’s hope Mother Nature’s ability to provide so much pain (or pleasure) won’t be demonstrated for many years to come. 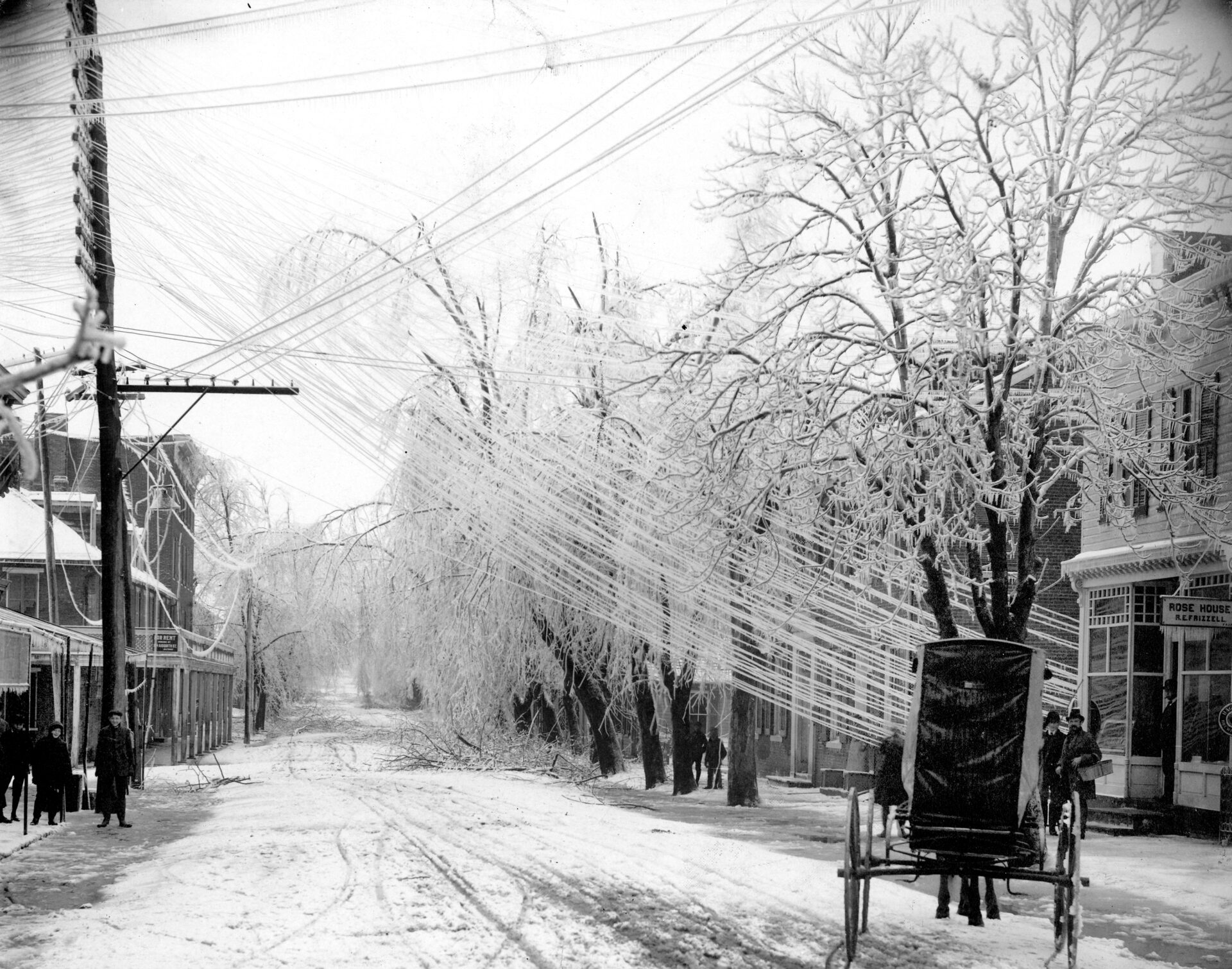 Photo caption:  This well-know photograph showing Westminster’s East Main Street after an ice storm in 1902 reminds us that the 2014 winter storms are not the first to inflict massive damage on our area.