We always like a story with a happy ending. This story may not have a “happy” ending, but at least is a satisfying one.

The life of Edward Trite, born in 1881 on the outskirts of New Windsor, was far from ordinary. He was one of 13 children born to Peter and Margaret Trite, a poor farm family. The 1900 census showed him working as a farm laborer in nearby Johnsville, Frederick County.

In July 1902, his family’s 60-foot-deep well needed cleaning. This could be a dangerous task if toxic gases were coming from the muck at the bottom; however, a test candle sent down continued to burn. Edward’s twin brothers lowered him in a large bucket, but as he disturbed the sediment, he felt himself becoming overwhelmed by fumes so climbed in the bucket and was half-way to the top when he tumbled out, dropping into about four feet of water. His brothers quickly descended, loaded him into the bucket and sent him to the surface, but he was half dead when pulled out. By the time the twins were finally brought up, they were lifeless and were buried together at Pipe Creek Church of the Brethren Cemetery. Although no one was sure Edward would recover, he did.

About 1905 he married Ida Belle Ward, a girl he may have met in Hagerstown, and by 1910 they were living near New Windsor, the parents of three children. Edward was working for the Western Maryland Railroad in Union Bridge. Soon a fourth child arrived and Ida was pregnant with a fifth in February 1917 when the family moved into housing belonging to Tidewater Portland Cement Company in Union Bridge, Edward’s new employer.

That month, a notice appeared in the Union Bridge Pilot that “a very serious accident” had occurred at Tidewater and Edward “was caught between two cars and had his hip crushed.” This time luck was not on his side. Although immediately sent to a hospital in Baltimore, he succumbed to his injury in June at Springfield Hospital in Sykesville and was buried at Pipe Creek Cemetery in an unmarked grave because the family had no money. Ida and the four children were evicted from company housing and went to live in Hagerstown where a daughter was born. Ida had a sister living there who probably provided help, at least at the outset. Norman, Edward and Ida’s oldest child, began working as a “winder” in a Hagerstown silk mill at age 13, apparently the only breadwinner for the family of six.

For 97 years, Edward Trite lay buried somewhere at Pipe Creek until John Sipes, the son of Edward’s sister Grace, decided to locate the grave and have a marker installed. He met with Kent Martin, currently the plant manager at Lehigh Portland Cement Company in Union Bridge and shared Edward’s tragic story. Lehigh had purchased the cement plant from Tidewater in 1925, and Kent recognized this as an opportunity to make amends for what occurred long, long ago. The company generously absorbed the cost of a marker and its installation at Edward’s newly-discovered gravesite. 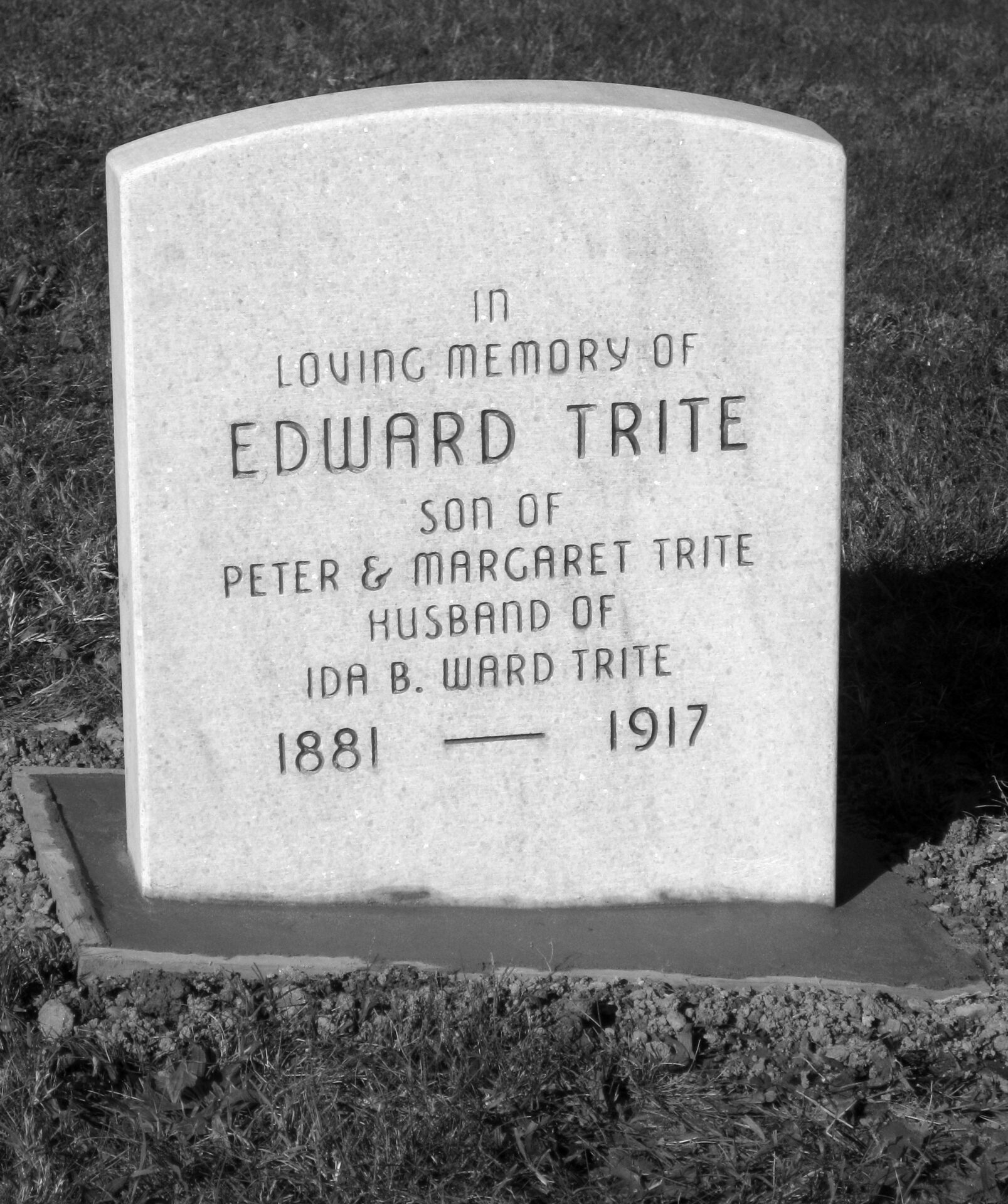 Photo caption: The gravestone of Edward Trite at Pipe Creek Church of the Brethren Cemetery was generously donated by Lehigh Portland Cement Company. Trite died as a result of an industrial accident in 1917 while working for Lehigh’s predecessor, Tidewater Portland Cement.