One Tiny Electric Plant Used to Power all of Union Bridge

In this era of giant energy firms such as Potomac Edison and Baltimore Gas and Electric, it is hard to believe that roughly 100 years ago, one man owned a tiny electric plant that was the source of power for the town of Union Bridge. Ezra A. C. Buckey’s company made Union Bridge “one of the best lighted and most attractive towns in Maryland.”

Buckey was born on a farm in Johnsville, Frederick County, in 1859, but settled in Union Bridge when he was about 50 years old and bought a farm and mill water rights near Middleburg along Little Pipe Creek. A mill previously at the spot had burned, and Buckey recognized that harnessed water power could just as easily produce electricity as grind wheat or corn. Earlier in his life he had been a farmer, a partner in a firm which manufactured gasoline engines, and the operator of a grain elevator, but now he wanted a less strenuous life – “one in harmony with his inclinations.” Apparently, his “inclinations” were engineering projects.

According to a 1910 Carroll County newspaper supplement featuring businesses throughout the county, Ezra Buckey received absolutely no support from residents of Union Bridge as he tackled the problems of building an electric power plant, but he persevered anyway. After constructing a water-tight dam, he “used the best materials for his power-house and built a foundation for the best constructed machinery. When the machinery was installed, it was found to run with the smoothness of a watch and the power could be fully utilized.”

Current generated by twin turbines flowed from Middleburg to Union Bridge on four miles of cable. “A watchman turns on the water in the evening and an automatic governor regulates the amount of water and closes the arc-light plant entirely when the moon has risen to sufficient height or when daylight makes useless the electric arcs. The incandescent light continues through the night as every place of business in Union Bridge is now lighted by this plant. The Blue Ridge College enjoys 241 incandescent lamps.” Homes as well as businesses and the college benefited.

The supplement had nothing but praise for Buckey’s venture. “It is for future generations to see what Mr. Buckey has done for his town and county. This is undoubtedly the greatest boon Union Bridge has ever received…”

Once his electric plant was up and running, an advertisement Buckey placed in the Union Bridge Pilot revealed that he was not only a very clever mechanical and electrical engineer but also a savvy businessman. He claimed he was selling electric current to the townspeople at two-thirds the price charged elsewhere, but he demanded that he be the only source for light bulbs. “I wish to notify all subscribers on my Electric Light Line that anyone who purchases electric bulbs elsewhere in the future, than from myself or the hardware store of Geo. P. Buckey, will be disconnected from my line, as every contract I have calls for the purchase of all lamps from myself or hardware store.” At that time, a 25-watt bulb cost 30 cents. 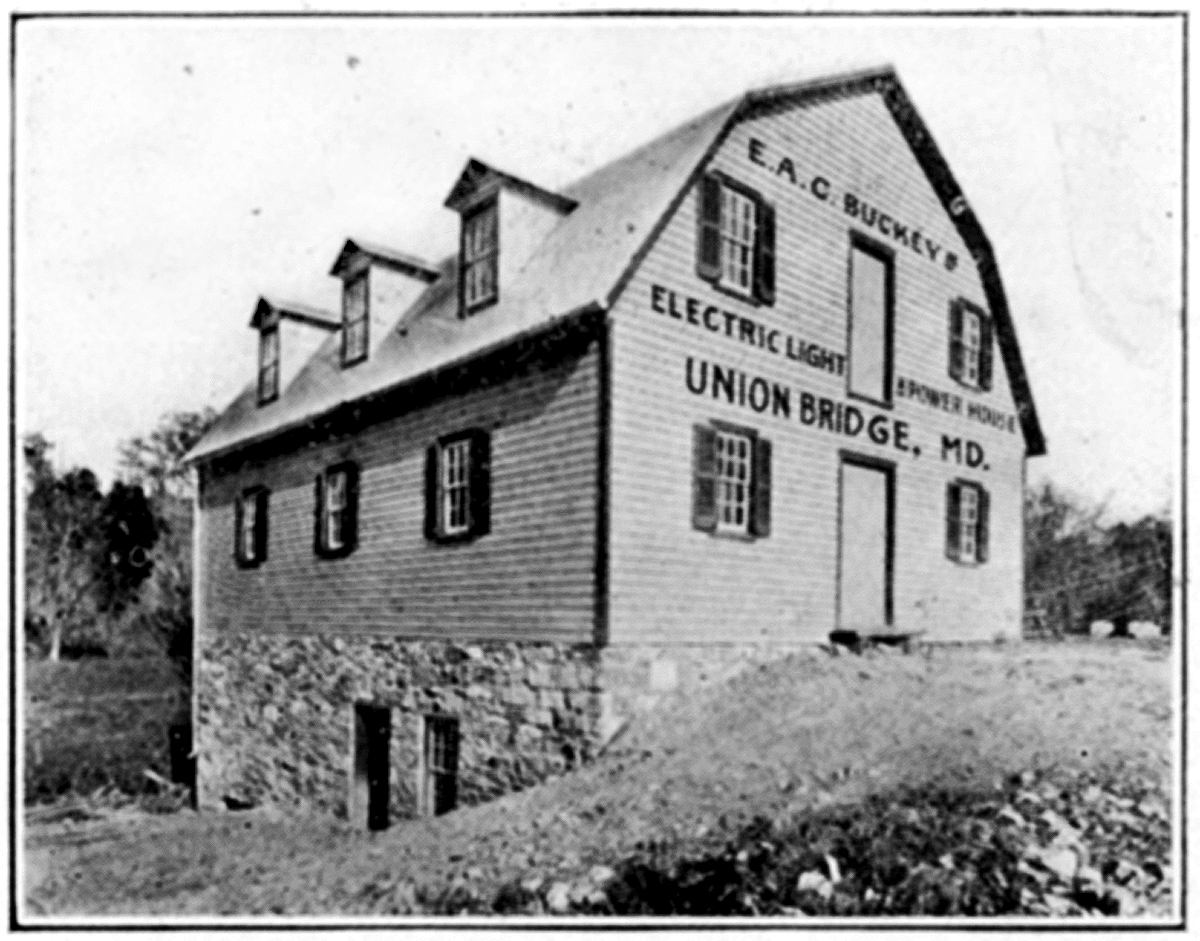 Photo caption: Ezra A. C. Buckey’s small electric plant on Little Pipe Creek near Middleburg supplied the power to light homes and businesses in Union Bridge for about five years beginning in 1909/10.