Medford was Once a Bustling Hub of Activity

As the Western Maryland Railroad wound its way across Carroll County from Finksburg to Union Bridge eighty years ago, it stopped at a very small community halfway between Westminster and New Windsor called Medford.  That hub of activity, which was famous across all of central Maryland and parts of surrounding states, has totally disappeared.

The stop appeared as Waesche’s Station on an 1862 map because Joseph A. Waesche had a dry goods store there, but by the 1920s and 1930s the name “Medford” was applied to a handful of houses, a school, post office, and a huge assemblage of barn-like buildings housing the Medford Grocery Company.  J. David Baile sold everything under the sun from his store – wallpaper, meat, furniture, underwear, fly spray, fertilizer, blankets…even kerosene and dynamite.  He advertised in up to eighteen newspapers including two metropolitan ones, so customers arrived from all over central Maryland, parts of southern Pennsylvania, and even from Harpers Ferry, WV.  They came to experience the phenomenon of an old-time general store, but principally to buy at Baile’s fabulously low prices.  If there is an equivalent today, it might be WalMart, but even that doesn’t handle dynamite!

Baile bought merchandise by the carload (railroad car that is) and he operated a slaughterhouse which butchered 600 to 700 beef cattle and 250 hogs per year.  All of his goods were sold from three three-story buildings, but there were additional buildings for storage of excess merchandise.  When customers left at the close of each shopping day, Medford’s population dwindled down about 80 inhabitants, many of them probably store employees or their family members.  In 1938, Baile estimated his store’s gross income was roughly $200,000, not bad for a local business when the U.S. was still recovering from the Depression.

With the death of David Baile in 1944, the store closed and the community slowly disappeared.  The Carroll County Times of August 1, 1988 contained interviews with people who lived in the area and watched the demise of Medford.  Paul Martin said, “When the grocery store closed up, it just seemed like it all faded away.”  Wes Quail noted, “It looks like a ghost town.  It was a metropolis…After World War II, it just died…It looks like an atom bomb went off there.”  Today the intersection of Medford Road and Rte. 31 gives little or no hint of that “metropolis.”

Long before Waesche and Baile sold their wares, this lovely part of Wakefield Valley was home to several prominent early Methodists.  Andrew Poulson, who conducted one of the first Methodist “classes,” had a house about a quarter mile from Medford and James McCannon moved there from Baltimore to build a brick home described as “one of the most impressive early nineteenth century houses in Carroll County.”  Unfortunately, the latter has been transformed into a business office for LaFarge North America’s quarry operation.

You’ll find wonderful old-time county scenes in Bob Porterfield’s Westminster, The Way It Was and in Carroll County, Then and Now by Cathy Baty and Jerry Trescott.  The books are for sale at The Shop at Cockey’s, 216 E. Main Street, Westminster. 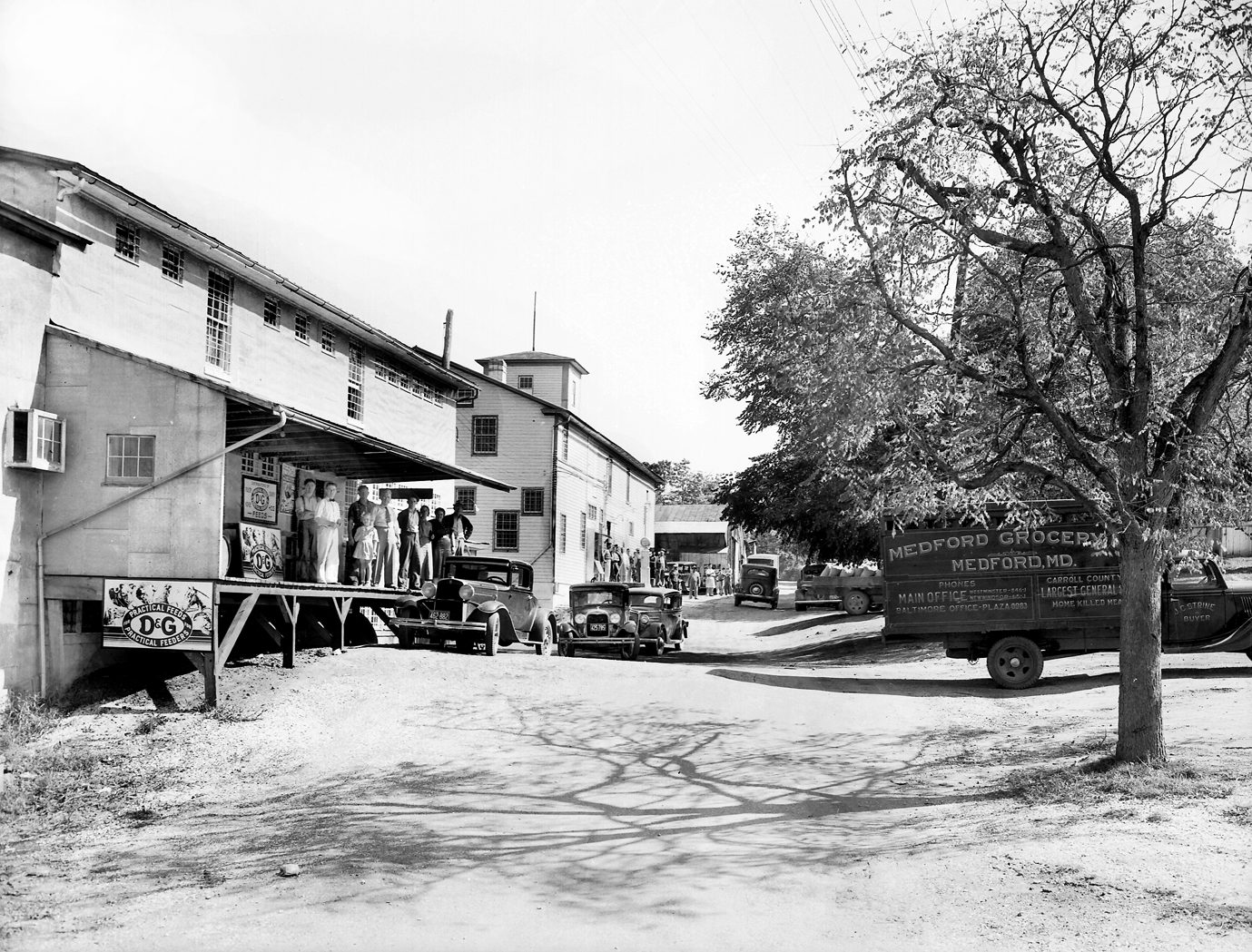 Photo caption: Customers gather at J. David Baile’s mammoth Medford Grocery Co., a collection of buildings along the Western Maryland Railroad tracks at Medford, about halfway between Westminster and New Windsor, in the early 1930s.  Nothing remains of the community today, but it was the site of a thriving business 80 years ago.