Saturday, January 19, 2008, marked the 171st birthday of Carroll County. Several hundred history enthusiasts gathered at the Westminster Fire Department for an interesting lecture and refreshments including birthday cake.  The fiftieth anniversary on April 11, 1887, was quite a different affair altogether!

Between fifteen and twenty-five thousand people arrived in Westminster that bright spring 1887 morning to celebrate the occasion in typical nineteenth century fashion with a parade, addresses, poetry, pomp and circumstance.  The April 12th Baltimore Sun reported, “Probably 25,000 people participated in the celebration, and everything passed off pleasantly and with good order.  From all parts of the county large cavalcades of horsemen moved on the town and participated in the parade.”  The Democratic Advocate said, “The line [of the parade] was about two miles long, and the route traversed was four miles.”  “Preparations were made at the first dawn of day to come to town, and every road leading to the county seat was lined with vehicles of all kinds, by pedestrians and people on horseback.  Everybody came early, and by 9 o’clock the streets were thronged as never before, and trains east and west on the Western Maryland Railroad brought many hundred more.”

“As the people came into town at either end, the word ‘WELCOME’ in large letters on triumphal arches greeted them, and the figures ‘1837’ and ‘1887’ indicated the span of years from the birth of the county to the present time.”  The decorative arches spanned various streets and were erected several days in advance.  Homes as well as businesses were trimmed with flags, banners, bunting and evergreens for the Monday event.  “Westminster, as the capital of the county, did herself credit in her preparations,” said The Democratic Advocate.

The grand parade was termed “a brilliant spectacle.”  Twelve bands, both local and from other counties, and 2 drum corps provided music for approximately 2,000 participants.  “Wheelmen” on the popular high-wheeled bikes, firemen, distinguished older citizens and horsemen joined impressive trade displays moving along the parade route.  It must have been a stirring sight for people who had never been to Baltimore or ventured much beyond the county’s boundaries.  We now celebrate Carroll’s birthday on the historically correct day, but our forebears were wise to postpone their mammoth undertaking until the weather was more predictable.

From newspaper reports we learn the names of some senior citizens who participated – Francis Shriver, Geo. W. Manro, John Smith, Wm. P. Maulsby and dozens more important in the life of the county since its founding.  Colonel John K. Longwell (1810-1896) must have been thrilled to participate.  In the early 1880s, historian J. Thomas Scharf wrote that Col. Longwell had “contributed more than any single individual to the organization of Carroll County…”

The Veteran Firemen’s Association of Baltimore attracted attention with its hand engine, a reminder of days gone by.  Western Maryland College students, masquerading as faculty, had a “float” which spoofed their professors.  Professor McDaniel became “W.R. McDaniel, Prof. of mathematics, instructor in gymnastics, president of college bicycle club, secretary of the faculty, agent for gymnasium slippers, and Prof. of German,” while Reuben Walker was “Prof. of culinary department and expert on hash.”

Harry Jones Shellman, a native son residing in New York, sent a twelve-stanza poem enjoyed by one and all.  Its opening lines read:

Half of a century’s come and gone;

Full fifty years have passed away

Since over Parr’s Ridge burst the dawn

And ne’er, while gazing on the earth,

Did Phoebus smile on fairer birth;

For Nature, laying out the plot,

Had made of it a garden spot,

And spread beneath the azure skies 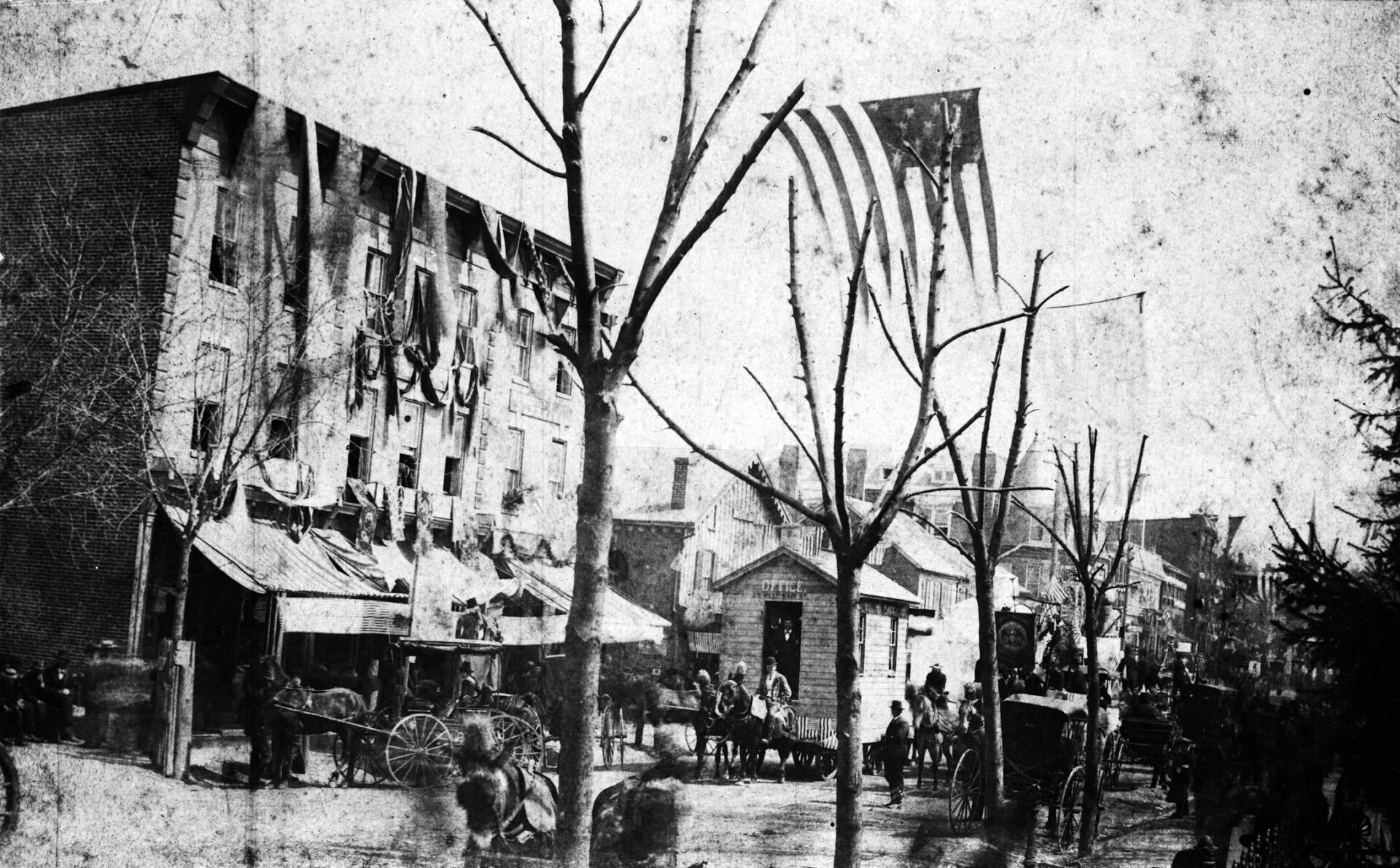 Photo caption: In this historic photo, a parade float heads west down Westminster’s elaborately decorated Main Street at the intersection of Railroad Avenue during the celebration of Carroll County’s 50th anniversary on April 11, 1887.