Much has Changed in Last 100 Years of Education

The year 2020 has brought many challenges in defining the “new normal” for Carroll County residents, especially in education. Since school began this month, and the “new norm” consists of virtual classrooms in most schools, an examination of the schools of 100 years ago seemed to be a logical choice for this week’s Yesteryears article.

What were the significant differences in the classrooms 100 years ago? Among the notable differences were the predominance of one-room schools, segregation, and the small number of high school students. Most children attended one-room schools, many of which still dot the Carroll County landscape, often turned into private homes. In 1920 Carroll County owned 125 school buildings and rented 14 more. Of the 139 school buildings, 107 had only a single teacher. There were 13 schools where two teachers taught, and only nine schools had three or more teachers. Although a class size of 25 students was average, a teacher had eight or fewer students in one school while in another, a teacher had to contend with more than 40 students. Maryland schools were also segregated. Carroll’s 1920 student population included 6,852 elementary students, of whom 456 were black. The six high schools had 571 students, all of them white. Teaching at these six high schools were 13 teachers at Westminster, six at Mt. Airy, three at Taneytown, four at Union Bridge, three at Sykesville, four at Hampstead, and one at Manchester.

A faculty of 208 taught the nearly 7,500 students—181 taught elementary school, and 27 taught high school. The teaching profession in 1920 was primarily an occupation for single women. Of the 158 female teachers working in the county, only nine were married. The School Board’s strong preference for unmarried female teachers is reflected in a resolution adopted during the 1928-1929 school year that barred married women from teaching, except in unusual cases. The best-paying jobs were in the county’s six high schools. These teachers earned an average of $903.70, while elementary teachers in white and black schools had average salaries of $537.85 and $431.87. Retired teachers were not entirely forgotten by the state, which appropriated $36,000 annually for a retirement fund. Teachers who had served 25 years, reached the age of 60, were no longer able to continue their duties in the schoolroom, and had no other means of comfortable support received $200 per annum.

Local elementary students were taught arithmetic, reading, spelling, English, and other subjects and were tested annually. In summing up the State Board of Education’s accomplishments in 1920, the State Superintendent noted the remarkable growth of his department. Before a new school law was passed in 1916, his department consisted of himself, an assistant superintendent, and a clerk. By 1920 the staff had grown to include supervisors of high schools, rural schools, “colored” schools, vocational education, and public-school music. The state office also had a credential clerk, certificate clerk, bookkeeper, and a stenographer. The growing complexity of public-school education brought many changes.

By the 1930s, the one-room school era was becoming part of the county’s history; by 2030, will teaching in a brick and mortar building be the same?

David Buie is a graduate of the University of Baltimore and Johns Hopkins University. He is an active member of the Historical Society of Carroll County, the Taneytown Heritage Committee, Vice President of the New Windsor Heritage Committee, and the Carroll County Representative to the Coalition to Protect Maryland Burial Sites. He can be contacted on his “Downtown Taneytown” FB page or via e-mail at teambuie05@msn.com. 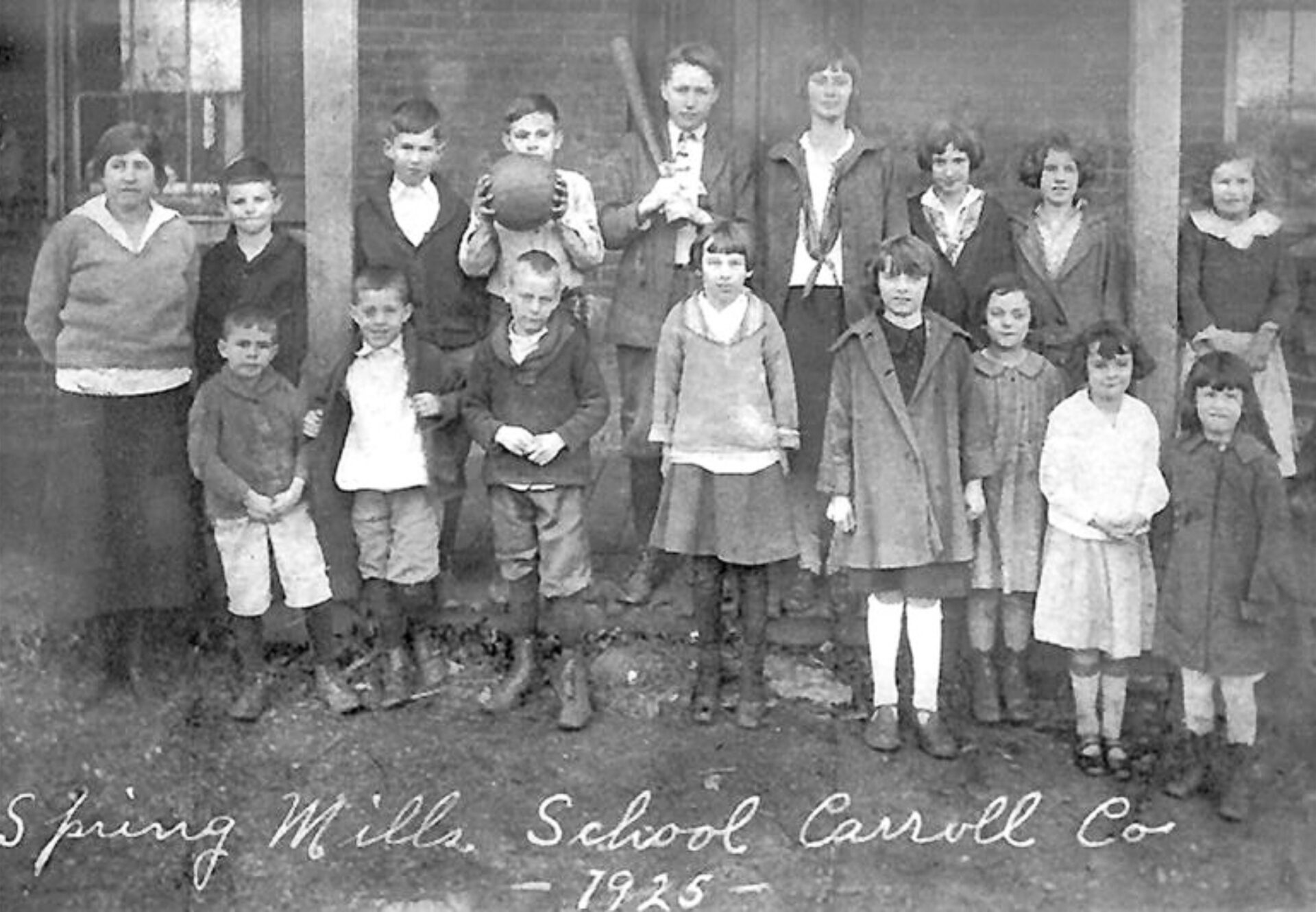 Image: Class photo of the Spring Mills School in 1925. The schoolhouse is a classic example of the one room schoolhouse of its time. (Courtesy Photo).